Reese Witherspoon is an Academy Award winning American actress who has also made a foray into film production. Witherspoon started off as a teenage actor and through her roles in television as well as films and mini-series; she managed to get a foothold in Hollywood. She is famous for roles in films like ‘Legally Blonde’, ‘Sweet Home Alabama’, ‘Four Christmases’ and plenty of other romantic comedies. However, it would be a mistake to typecast Reese Witherspoon as a specialist of romantic comedies since throughout her career she has come up with stupendous performances in in intense films like ‘Walk the Line’, ‘Wild’, ‘Vanity Fair’ and ‘Rendition’. Witherspoon is one of those rare actresses who have successfully struck a balance between commercial success and critical appreciation, which is why it is not a surprise that she is considered among the most bankable stars in Hollywood. Witherspoon has also been an advocate children’s and women’s welfare across the world and is actively involved with the Children’s Defence Fund. It is not an exaggeration to state that Reese Witherspoon is one of the greatest modern stars in Hollywood and her range of films will continue to enthral audiences for generations. American People
American Women
Louisiana Actresses
Stanford University
Aries Actresses
Childhood & Early Life
Laura Jeanne Reese Witherspoon was born to John Draper Witherspoon and Mary Elizabeth on 22 March 1976 at the Southern Baptist Hospital located in New Orleans in the Southern US state of Louisiana. Her father was a lieutenant colonel in the US army, while her mother worked at the Vanderbilt University as a nursing professor.
Witherspoon’s father was stationed in the region then known as West Germany during her early childhood and the family returned to Nashville, Tennessee only when she was 4 years old. She studied at the Harpeth Academy and later on went on to study at Harpeth Hall School. Witherspoon was a cheerleader at the latter school.
In 1983, when she was only 7 years old, Witherspoon appeared in an advertisement for a local flower store and four years later she took part in a talent fair as well. These appearances gave her the confidence to become a full time actor and hence even though she was a good student she quit Stanford University after a year in order to make a career in acting. She had enrolled as an English literature major at the university. 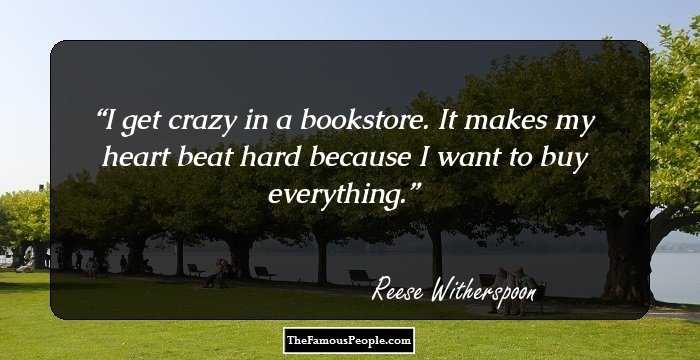 Quotes: Heart, I
Continue Reading Below
Career
In 1991, Reese Witherspoon made her film debut in ‘The Man in the Moon’ and her portrayal of a rural teenager was widely appreciated by film critics. In the same year, she was cast in the TV-only film ‘Wildflower’ with Diane Keaton and the next year she starred in another TV movie titled ‘Desperate Choices: To Save My Child’.
Witherspoon appeared in some television series and movies like ‘Return to Lonesome Drive’ and the Disney productions like ‘A Far off Place’, in the early 1990s. However, her career really took off in 1996 when she starred in the film ‘Fear’ alongside Mark Wahlberg and later on that year she paired up with Brooke Shields in the comedy-thriller ‘Freeway’. Both films turned out to be successful.
Witherspoon took a hiatus from films for a while but returned in 1998 and was cast in three films in the year. The three films were ‘Pleasantville’, ‘Twilight’ and the romantic comedy ‘Overnight Delivery’. Among the three, ‘Pleasantville’ proved to be her most popular role. She followed it up with the films ‘Cruel Intentions’ and the critically acclaimed ‘Election’ in the following year.
In 2001, Reese Witherspoon starred in ‘Legally Blonde’ and that film proved to be the big breakthrough in her career as the film garnered worldwide recognition as well as critical appreciation. Following the success of ‘Legally Blonde’, she starred in ‘The Importance of Being Earnest’, ‘Sweet Home Alabama’ and the commercially successful but cinematically criticised sequel ‘Legally Blonde 2: Red White And Blonde’.
In 2004, Witherspoon was cast by Mira Nair in the film ‘Vanity Fair’ and without a doubt it was the most difficult project that the actress had undertaken in her career till then. The film was a success and Witherspoon’s portrayal of the ambitious Becky Sharp was widely applauded by critics.
In the 2005 film ‘Walk the Line’, Reese Witherspoon played the role Johnny Cash’s 2nd wife June Carter Cash and turned in arguably the best performance of her career. Critics like Roger Ebert were gushing in their praise and Witherspoon went on to win the biggest awards for that film including the Academy Award for Best Actress, BAFTA, Screen Guilds Awards and the Golden Globe.
Following her star turn in ‘Walk the Line’, Witherspoon appeared in movies like ‘Penelope’ and ‘Rendition’ which were not as well received and in fact many criticised her acting as being ‘lifeless’.
In 2007, Witherspoon teamed up with Vince Vaughn in the comedy ‘Four Christmases’ and the film proved to be a commercial success. Over the next few years she starred in romantic comedies like ‘How Do You Know’, ‘This Means War’, ‘Water for Elephants’ and ‘Mud’.
In 2014, Witherspoon starred in the film ‘The Good Lie’ but it was her other release ‘Wild’ in the same year that got all the accolades and her portrayal of a woman scarred by tragedies earned her an Academy Award nomination for best actress. The following year she played the role of a police officer in the film ‘Hot Pursuit’.
Continue Reading Below 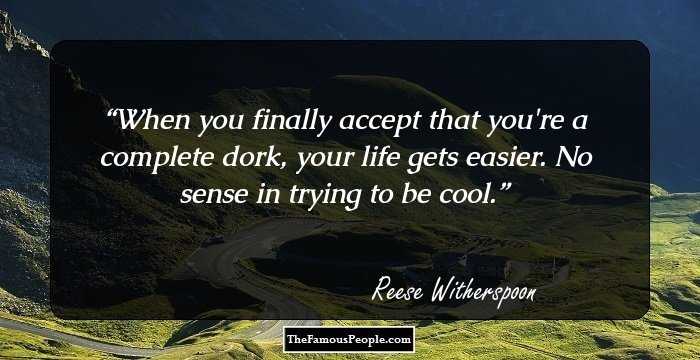 Quotes: You, Life, Trying
Major Works
‘Legally Blonde’ is without doubt one of Reese Witherspoon’s biggest commercial hits but as far as her performance as an actress is concerned it is impossible to look past ‘Walk the Line’, a film which is regarded as the best performance in her career. She won the Academy Award for Best Actress as well as the BAFTA, the Golden Globes and the Screen Guilds Awards for that role.
Awards & Achievements
Reese Witherspoon won the Academy Award for Best Actress, BAFTA, Golden Globes as well as the Screen Guilds Awards for her role in the 2005 film ‘Walk the Line’. She remains one of the very few actresses who have won all those awards.
Witherspoon was featured in the ‘TIME 100’ list in the year 2006 and People Magazine named her among the ‘100 Most Beautiful’ in a special issue in the same year. 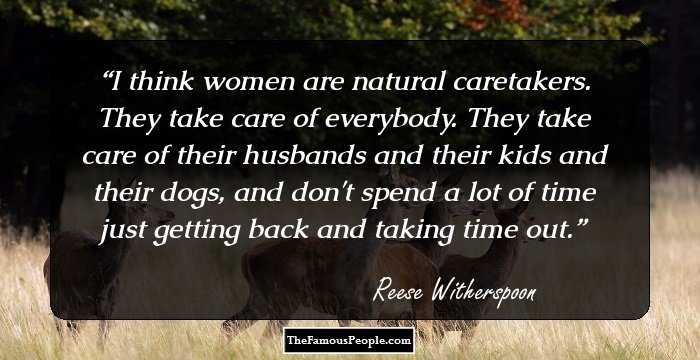 Quotes: Think, Time, Women, I
Personal Life & Legacy
Reese Witherspoon got married to fellow actor Ryan Phillips in the year 1999; however they divorced in 2007. The couple has two children - a daughter named Ava and a son named Deacon.
Witherspoon was involved in a romantic relationship with actor Jake Glynehall from 2005. The relationship ended two years later.
In 2011, Reese Witherspoon got married to Jim Toth, who is a Hollywood talent agent. The couple has a son named Tennessee James Toth.
Trivia
Witherspoon started a production company called Type A Films but in 2012 she merged it with another company to form the company Pacific Standard. She has also established a fashion brand named Draper James.

Quotes By Reese Witherspoon | Quote Of The Day | Top 100 Quotes

See the events in life of Reese Witherspoon in Chronological Order 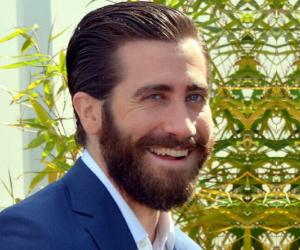 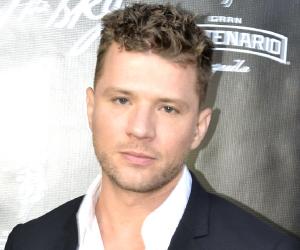