Jack Dorsey is an American businessman who co-founded Twitter. Twitter, an online social networking service that enables users to send and read short messages called ‘tweets,’ is one of the ten most-visited websites in the world. Dorsey is also the founder of ‘Square,’ a mobile payments company that markets several software and hardware payments products. A computer programmer by profession, he became interested in dispatch routing while still in his teens. He loved computers from as long as he can remember and spent hours studying the IBM computer model available at that time. He was fascinated with the concept of coordinating taxicabs, couriers, emergency services, and other fleets of vehicles and wanted to create a live map of his city, displaying the vehicles in motion as small moving red dots. He was just 15 when he wrote a program for dispatching taxis and firefighting services. He went on to study at the ‘Missouri University of Science and Technology’ before shifting to the ‘New York University’ where he first came up with the idea for Twitter. He dropped out before receiving his degree to follow his passion. Teaming up with his friends, he launched Twitter in 2006. Sean Parker
DID WE MISS SOMEONE?
CLICK HERE AND TELL US
WE'LL MAKE SURE
THEY'RE HERE A.S.A.P
Quick Facts

His father was an engineer of medical equipment and worked for a company that developed mass spectrometers. Since the nature of his father’s job required the family to move frequently from one place to another, young Jack developed a passion for maps.

He went to ‘Bishop du Bourg High School’ in St. Louis, Missouri. He was known to be a quiet student as he suffered from stuttering. Jack was determined to overcome his problem and hence participated in a variety of oratory competitions and was finally able to speak without stuttering.

He developed an early interest in computers and was a member of his school’s computer club. He also spent considerable time studying the available model of IBM computers.

His fascination with maps developed into a serious hobby during his teenage years. He became interested in the challenges of coordinating taxicabs, delivery vans, ambulances, etc. and created software programs for taxi dispatching and firefighting services when he was just 15.

After high school, he enrolled at the ‘Missouri University of Science and Technology.’ Eventually, he transferred to ‘New York University.’ It was here that he came up with the idea of sharing short messages with friends. He did not stay long enough in the university to complete his degree. 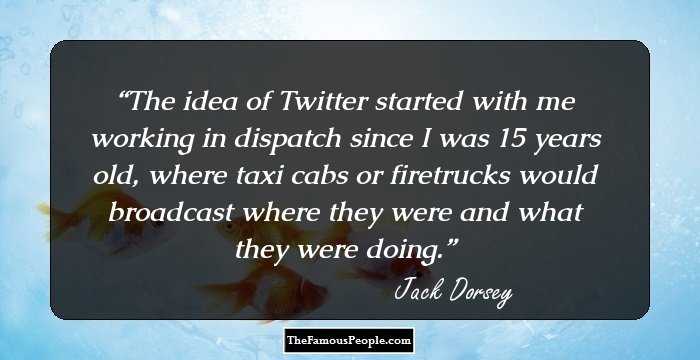 Jack Dorsey started working as a programmer. He moved to Oakland, California in 2000 in search of better career prospects. He started a company to dispatch taxis, couriers, and emergency services using his dispatch software.

During this time, he also got serious about his idea of a short message communication service that would update his friends about his status in real-time.

Meanwhile, his company failed and he struggled for the next few years. He made a living by freelancing. He even attended massage therapy courses. However, he never gave up on his dream of creating the short message service, which he had envisioned.

He approached ‘Odeo,’ a directory and search destination website, which was interested in text messaging services. He managed to catch the attention of ‘Odeo’ co-founder Evan Williams and one of the company’s executives Biz Stone.

In October 2006, Dorsey, along with Biz Stone, Evan Williams, and some other members of ‘Odeo,’ formed ‘Obvious Corporation,’ which later evolved into Twitter. Within two weeks, Dorsey created a simple site where users could instantly post short messages called ‘tweets’ of 140 characters or less.

Initially, Dorsey served as Twitter’s CEO. In 2008, Williams took over the role of CEO, while Dorsey became the chairman of the board. The company grew rapidly. Within five years of its founding, Twitter users were sending 50 million tweets per day.

In 2009, Dorsey teamed up with fellow entrepreneur and computer science engineer Jim McKelvey to form ‘Square Inc.’ Primarily started as a mobile payments company, ‘Square’ eventually branched into financial and merchant services as well. It is a fast growing company and Dorsey serves as its CEO.

On December 24, 2013, it was announced that Dorsey is the new member of the board of directors of ‘The Walt Disney Company.’ 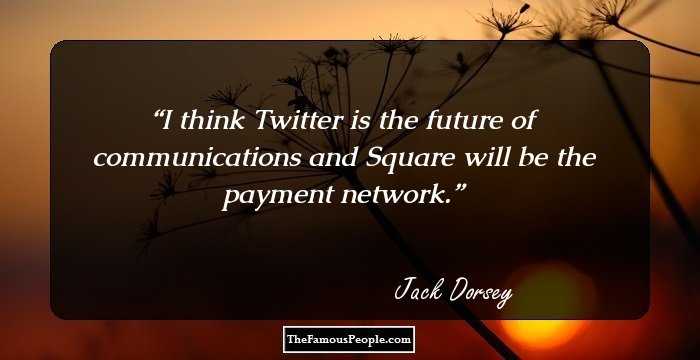 Jack Dorsey is best known as the co-founder of online social networking service Twitter. Launched in 2006, the service became extremely popular within months. As of May 2015, Twitter has more than 321 million users and over 25 offices around the world.

He was presented the ‘Innovator of the Year Award’ for technology by ‘The Wall Street Journal’ in 2012. 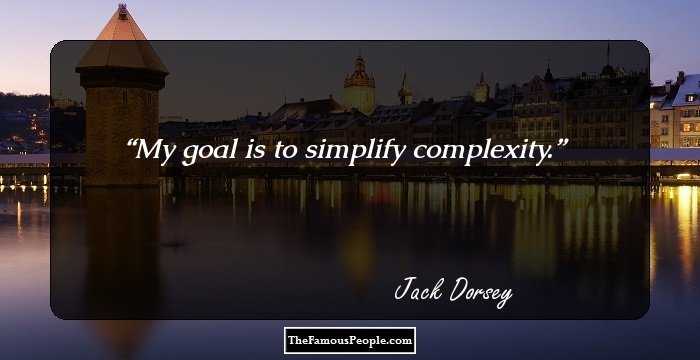 Quotes By Jack Dorsey | Quote Of The Day | Top 100 Quotes

See the events in life of Jack Dorsey in Chronological Order