Pulitzer Prize-winning author Larry McMurtry was known for his literary works like Terms of Endearment, The Last Picture Show, Lonesome Dove, and Horseman, Pass By. His work was by and large set in either contemporary Texas or the Old West. A number of American feature films and television series have been inspired by his writings. Movies like Hud, Texasville, Lovin' Molly and The Evening Star amongst others, were based on his novels. The films that were adapted from his works earned thirteen Academy Awards out of thirty-four nominations. He earned the reputation of being an ardent book-collector for his store Booked Up that holds a vast collection of rare books. He earned number of awards and accolades, including the Pulitzer Prize for his novel Lonesome Dove. Lonesome Dove  was also adapted into miniseries that bagged in seven Emmy Awards out of eighteen nominations. He was also awarded the National Humanities Medal  in 2014. Hunter S. Thompson
3rd June In History
DID WE MISS SOMEONE?
CLICK HERE AND TELL US
WE'LL MAKE SURE
THEY'RE HERE A.S.A.P
Quick Facts

American Celebrities
American Men
University Of North Texas
Tall Celebrities
Tall Male Celebrities
Childhood & Early Life
Larry Jeff McMurtry was born to William Jefferson, a rancher, and Hazel Ruth, on June 3, 1936, in Archer City, Texas, United States. As a child, he was brought up on a farm in the outskirts of Archer City.

In 1958, he graduated from the University of North Texas with a bachelor's degree. Two years later, he completed his master's from the Rice University in Houston, Texas. 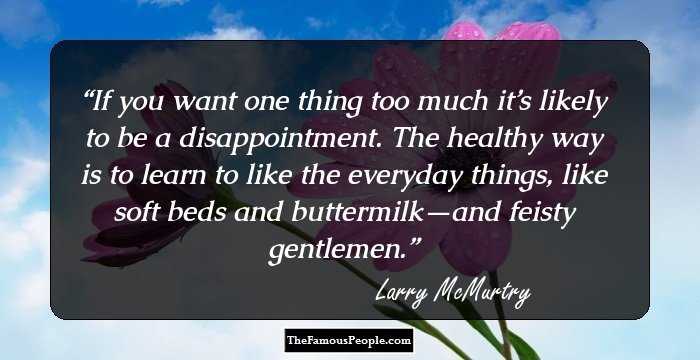 Quotes: You, Like
Continue Reading Below
Career
In 1960, American novelist, Wallace Stegner, taught McMurtry, along with other authors like Robert Stone, Ken Kesey, and Gordon Lish, the art of writing fiction, at the 'Stanford University'.
The following year, he published his first book, 'Horseman, Pass By', a novel that describes how it is to live on a farm.

The book was later adapted into the movie Hud, in 1963, featuring Paul Newman and Patricia Neal.

In 1963, McMurtry penned the novel, 'Leaving Cheyenne', which was adapted for the movie, 'Lovin' Molly', which was shot much later.
He received a 'Guggenheim Fellowship' the next year, in 1964, for his contribution to literature. During the same time, the eminent novelist taught English, at the 'Rice University'.
In 1966, the prolific writer published the novel, 'The Last Picture Show', which was later made into a movie with the same title. The movie starred Timothy Bottoms and Jeff Bridges in the roles of Sonny Crawford and Duane Jackson.
From 1968-74, he published fiction and non-fiction works, like 'In A Narrow Grave: Essays on Texas', 'Moving On', 'All My Friends Are Going To Be Strangers', and 'It's Always We Rambled'.

During the same time, in 1970, he started a bookshop called Booked Up with two partners.

In 1975, he wrote the novel, 'Terms of Endearment', which like his other works, formed the basis of a movie starring Shirley MacLaine, and Jack Nicholson, having the same name.
Continue Reading Below

During 1978-83, the celebrated author brought rolled out works like Somebody's Darling, The Desert Rose, and Cadillac Jack, all of them being well-received by readers and reviewers.

Two years later, in 1985, Larry released the novel Lonesome Dove. The book was adapted in to a television series with the same title. The subsequent novels in the same series were also adpated in three more miniseries.

In 1987, he penned the novel, Texasville, which was turned into a film, as a sequel to The Last Picture Show. The following year, the prolific writer inaugurated another branch of his bookstore Booked Up, in his hometown.

From 1989-90, the renowned novelist also published the books, Some Can Whistle and Buffalo Girls. The latter was made into a TV programme with same title. Larry McMurtry also wrote the script for a television film titled Montana.

In 1992, he wrote 'The Evening Star', which was once again made into a movie. The same year, he penned the screenplay for a movie, 'Falling from Grace', with American rockstar John Mellencamp in the lead.
Throughout the remaining decade, he wrote novels like 'Streets of Laredo', 'Dead Man's Walk', 'Comanche Moon', 'Walter Benjamin at the Dairy Queen: Reflections on Sixty and Beyond', and 'Duane's Depressed'.
The American writer also wrote two biographies, 'Crazy Horse: A Life', and 'Pretty Boy Floyd', of which the latter, based on gangster Charles Floyd's life, has elements of fiction in it.

The New York Review Books released a book of essays, Sacagawea's Nickname, written by Larry McMurtry in 2001. The book contained, not just essays but also reviews of other books, and several articles.

During the 2002-04, he wrote the novels, Sin Killer, The Wandering Hill, By Sorrow's River, and Folly and Glory.
Continue Reading Below
In 2005, McMurtry and Diana Ossana wrote the screenplay for an American film by Ang Lee, 'Brokeback Mountain'.

From 2007-2014, he published several works of fiction like When the Light Goes, Books: A Memoir, Rhino Ranch: A Novel, Custer, and The Last Kind Words Saloon. McMurtry decided to downsize and sell off the greater portion of his inventory in early 2021. On 10 and 11 August the auction was conducted that was billed as The Last Booksale. 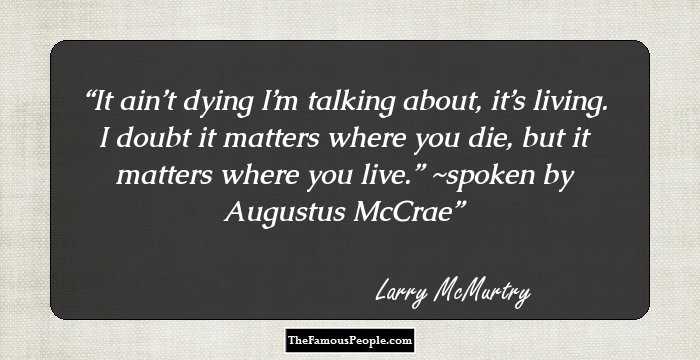 Quotes: You, Living, I
Major Works

In 1962, the 'Texas Institute of Letters' presented him with the 'Jesse H. Jones Award' for the book 'Horseman, Pass By'.

In 1966, he was felicitated with the 'Amon G. Carter' award for his non-fictional work, 'Texas: Good Times Gone or Here Again?'.

In 1985, Larry was honoured with the 'Pulitzer Prize' for his novel 'Lonesome Dove'. The next year, he was felicitated with the 'Jesse H. Jones Award' and 'Peggy V. Helmerich Distinguished Author Award', for the same book.

McMurtry shared with Diana Ossana the 'Academy Award' and the 'Golden Globe' for their screenplay of the film 'Brokeback Mountain', in 2006. 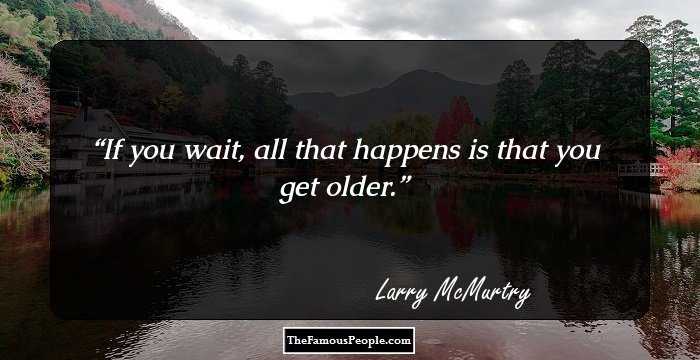 In 1959, Larry McMurtry married Jo Ballard Scott; the couple had a son named James. However, the couple separated after almost seven years of marriage.

He was the owner of Booked Up, an antiquarian bookstore.

Quotes By Larry McMurtry | Quote Of The Day | Top 100 Quotes

See the events in life of Larry McMurtry in Chronological Order