Advanced Search
Frances Bean Cobain is an American visual artist and model. She is also recognized as the only child of Hole frontwoman Courtney Love and Nirvana frontman Kurt Cobain. She has modeled for many high end brands, designers, and companies including Elle magazine, Harper's Bazaar, Marc Jacobs and Hedi Slimane. As an artist, she has one of her works displayed at the La Luz de Jesus Gallery under the pseudonym "Fiddle Tim". Cobain’s early life was quite rocky. In 1994, her father committed suicide and her mother was later arrested for substance abuse. These incidents threw her into the spotlight for the wrong reasons. Till date, she has tried her best to stay out of the media glare, having given only five official interviews in her entire life. Today, the American artist seems to have left behind her tumultuous past. She is loved by millions for her charming looks, especially her striking green eyes. Extremely talented and confident, Cobain is currently in a relationship with Matthew Cook, the frontman of the band The Ceremonies. As for now, she is active on the social media platform Instagram and is incredibly popular there. 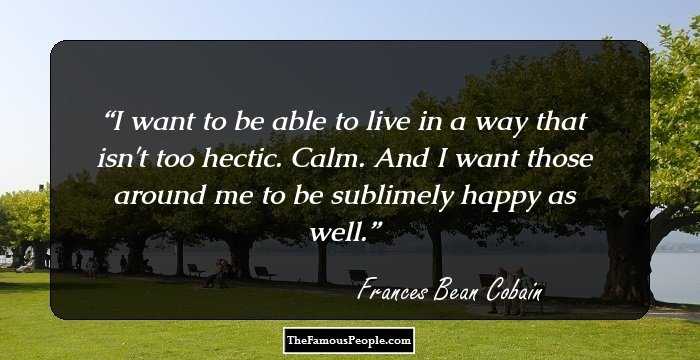 Quotes: Me
Continue Reading Below
Artwork
In 2010, Frances Bean Cobain displayed a collection of artwork titled ‘Scumfuck’ at the La Luz de Jesus Gallery in Los Angeles under the pseudonym "Fiddle Tim". On August 4, 2012, she participated in a group show called 'MiXTAPE'. In this show, the contestants were asked to pick a track and create art inspired by that track. Frances chose The Jesus and Mary Chain’s "Black". The eclectic combination of songs chosen by her was later featured for digital download on iTunes.
Recommended Lists: 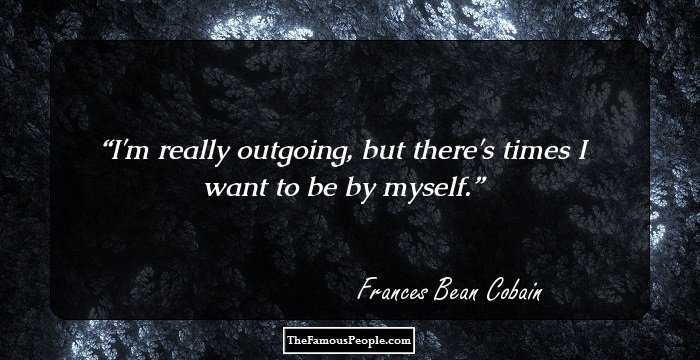 Other Works
In 2008, Cobain served as an intern for the Rolling Stone magazine. She contributed as a guest vocalist to the track "My Space" from the album ‘Evelyn Evelyn’ by Evelyn Evelyn which was released on March 30, 2010. She served as an executive producer for the HBO movie ‘Kurt Cobain: Montage of Heck’ that documents her father’s life. 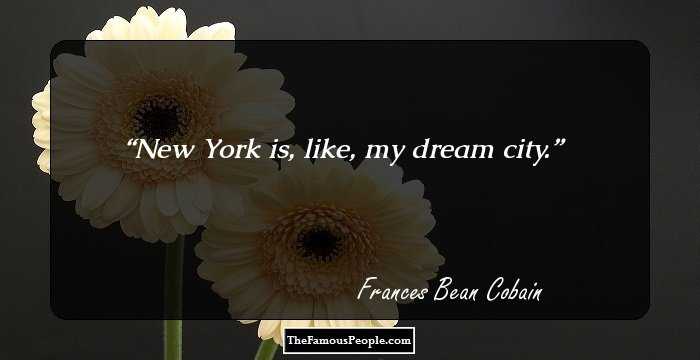 Quotes: Like
Personal Life
Frances Bean Cobain was born on August 18, 1992 in Los Angeles, California, the USA to Kurt Cobain and Courtney Love. Her mother supposedly took heroin during the pregnancy. A number of investigations took place after she was born and Cobain was removed from her parents' custody when she was just two weeks old. Following a lengthy legal battle, her parents regained her custody. On April 5, 1994, Cobain’s father Kurt was found dead at his home. His death was ruled a suicide. After his death, Cobain was subsequently raised by her mother, paternal grandmother, and aunts. She was again placed in her grandmother's care after her mother's drug-related arrest in 2003. Two years later, her mother regained her custody. In August 2010, Cobain inherited 37% of her late dad’s estate.
Taking about the American beauty’s love life, she married musician Isaiah Silva in June 2014. However, the couple separated later on. Currently, Cobain is in a relationship with The Ceremonies frontman Matthew Cook.