Ksenia Sobchak is a Russian TV anchor, journalist, socialite, and actress who recently announced her decision to run against Vladimir Putin in the 2018 Russian Presidential election. The daughter of renowned politicians, she was previously better known as Russia's No.1 'it girl', as well as 'Russia's Paris Hilton'. Since her late teenage days, she has been a regular face on media for posing for Russian glamour magazines, co-writing and appearing in many TV shows, and for dating a number of oligarchs. However, she went through a severe transformation following her 30th birthday and decided to revisit her political roots to do something significant for the country. Troubled by the fraud accusations after the 2011 parliament elections, she began rallying with the opposition supporters. While she was mostly known for her reality shows, she later started hosting political talk-shows as well. Citing the fact that her father was once Putin's mentor, she has been dubbed as a spoiler candidate by many political analysts, even though she is determined to further the opposition’s cause.
Continue Reading Below 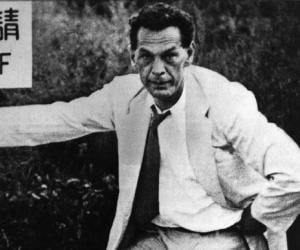 Russian People
Journalists
Russian Women
Saint Petersburg State University
Female TV Anchors
Childhood & Early Life
Ksenia Anatolyevna Sobchak was born on November 5, 1981 in Leningrad, USSR to Anatoly Sobchak and Lyudmila Narusova. Her father, a divorce lawyer and mentor to Vladimir Putin, was the first democratically elected mayor of Saint Petersburg, while her mother, also a politician, is a former member of the Federation Council of Russia.
She is half Czech and half Pole from her father’s side, while her maternal grandmother was a Russian from Pskov. Her maternal grandfather, Boris Moiseevich Narusovich, was a Jew who later changed surname to Narusov. She is not a practicing Jew, but claimed to have faced anti-Semitism towards herself and her family.
She was a brilliant student at school, topping her class, but was also very restless as a child and often created disruptions in studies. She initially aspired to be a prima ballerina and attended the ballet studio of the Mariinsky Theater and the Hermitage museum art school.
In 1998, she graduated from Herzen University School and enrolled into the Department of International Relations at St. Petersburg State University.
In 2001, she moved to Moscow to continue her studies at the Moscow State Institute of International Relations, and after earning her bachelor's degree in 2002, signed up for a two-year masters program there.
Continue Reading Below
You May Like

Famous Beautiful Women With Green Eyes
Career
Since moving to Moscow, Ksenia Sobchak has been in the media spotlight constantly for one reason or another. She once made news by claiming that diamonds and jewelry worth $600 000 had been stolen from her boyfriend’s apartment.
While still studying, she did a lingerie photo shoot for the Russian ‘FHM’ magazine. Later, she posed for the cover of the Russian ‘Playboy’ magazine in November 2006, and appeared in a scandalous photo shoot for ‘Maxim’ magazine in June 2007.
In 2004, she made her film debut in the movie ‘Thieves and Prostitutes’, in which she played an American psychologist who gets intimate with a monk on board the Russian space station. Her popularity skyrocketed after she began hosting the infamous reality TV show ‘Dom-2’ that year, even though she left the show in 2012 as its low-brow content didn’t fit with her interest in opposition politics.
In 2006, she launched, along with oligarch-widow Oksana Robsky, the perfume 'To Marry a Millionaire'. She also wrote a book on fashion, launched a collection of rubber boots, and hosted radio show on the Russian radio station, Silver Rain.
In 2007, she had her own reality show on Russian MTV, ‘The Blonde in Chocolate’, which created sort of a controversy for her use of cuss words that were not beeped out properly. The camera also followed her everywhere, whether she took a bath or got drunk.
During 2008-2010, she continued to host a number of reality shows like ‘Who does NOT want to be a millionaire?’, ‘Last Hero-6’, ‘Sweet life of a blonde’, ‘Myz-TV Awards’, and ‘Two Stars’. As an actress, she appeared as a luxury prostitute in the spoof-comedy ‘The Best Movie’, portrayed Eva Braun in ‘Hitler Kaput!’, and worked in ‘Nobody Knows About Sex 2: No Sex’, ‘Europe-Asia’ and ‘Artefact’.
Politics
Ksenia Sobchak made first foray into politics back in 2006 when she launched her own youth movement, ‘All Free’ – to teach young Russians how to be free – even though the endeavor was not successful.
Following her 30th birthday in 2011, she decided to get involved in politics, and became inclined towards the opposition after numerous reports alleging fraud during parliament elections appeared in the media in early December.
She subsequently joined protest rallies, campaigned against Putin’s re-election and worked as an observer during the president elections on March 4, 2012. On June 12, 2012, the apartment she shared with her then-boyfriend and leader of the People’s Freedom Party, Ilya Yashin, was raided by the Investigative Committee of Russia.
Continue Reading Below
In the following years, she gave numerous interviews talking about her sudden change of heart, but critics saw it as one of her publicity stunts, as “playing politics” was the newest trend. The fact that she launched a number of political shows during this time did not help her cause either.
One of her first political talk shows, ‘GosDep (State Department) with Ksenia Sobchak’ was aired on MTV Russia on September 7, 2012, but was promptly cancelled after she interviewed anti-Kremlin activists. While MTV issued a statement saying their viewers were not interested in politics, she was later offered to run the show online (titled ‘GosDep-2’) by Mikhail Prokhorov, a wealthy businessman and a former presidential candidate.
On October 18, 2017, she announced her intention to run for presidency opposite Vladimir Putin, who is almost certain to win the election. The news became a media sensation as she has been dubbed as Putin's godchild and the closeness between the two families is not a secret.
Many claimed that she was just a spoiler candidate set up by the Kremlin to split the opposition vote, much like billionaire Mikhail Prokhorov in 2012. However, she asserted that she would consider withdrawing candidacy if Alexei Navalny, Russia’s most prominent opposition leader who is officially barred from running for presidency, is allowed as a candidate.
Achievements
Ksenia Sobchak is known as Russia’s most famous socialite and No.1 'it girl'. In September 2009, she was named among the top ten of Russia’s 50 richest celebrities by the Russian ‘Forbes’ magazine, which estimated her income to be $1.2 million.
Personal Life & Legacy
In 2012, as Ksenia Sobchak became more involved with the opposition, she began dating member of 'Solidarnost' (Solidarity) movement, Ilya Yashin. They were often seen together in public at rallies and protests, shared an apartment, and were arrested during their last march together on December 15 that year.
Media speculations about her relationship with Yashin ended after she announced her marriage to television personality Maksim Vitorgan on February 1, 2013 via Twitter the next day. The doting wife and mother of a son shared a picture of her husband playing with their child, wishing him happy 45th birthday on September 10, 2017.
Trivia
While the comparisons with Paris Hilton is a bittersweet experience for Ksenia Sobchak, the two got to meet each other at the 2008 'Moscow MTV Awards'.

See the events in life of Ksenia Sobchak in Chronological Order