Advanced Search
Kroy Biermann, born as Kroy Evan Biermann, is an American football outside linebacker. He is also famous for being the husband of reality TV star Kim Zolciak. Starting his professional career in 2008 with the Atlanta Falcons, he had enjoyed a successful football career right from his college days. Biermann, who had played at the University of Montana during his collegiate career, had been named the ‘Big Sky Conference Defensive MVP’ in the year 2007. The same year he had also won the honourable Buck Buchanan Award. Besides playing football, the sportsman has made television appearances as well. He appeared in the Dancing Stars of Atlanta’s charity event so as to raise money for people suffering from Alzheimer's disease. He also happened to meet his future wife at the same event. Coming to Biermann’s social media status, he is incredibly popular on Twitter and Instagram. As of August 2017, he has about 249k and 313k followers on Twitter and Instagram respectively. JJ Watt
12th September In History
DID WE MISS SOMEONE?
CLICK HERE AND TELL US
WE'LL MAKE SURE
THEY'RE HERE A.S.A.P
Quick Facts

American People
Tall Celebrities
Tall Male Celebrities
Male Sportspersons
American Sportspersons
College Career
Kroy Biermann had a very successful sports career at the University of Montana. There he played in 52 career games and totalled 220 tackles and 32 sacks (the second-most in the school history). In 2005, he became the team’s 5th-leading tackler. The following year, he won the title of Walter Camp First-team Small College All-American and even earned the First-team All-Big Sky Conference. In 2007, Biermann was named Big Sky Conference Defensive MVP and was also nominated for the Buck Buchanan Award (which he later won).
Recommended Lists:

American Football
Virgo Men
Continue Reading Below
Professional Career
In 2008, Kroy Biermann was selected by Atlanta Falcons in the fifth round of NFL Draft. He posted his first ever career sack in Week 13 match-up while playing against San Diego Chargers. On November 2, 2009, Biermann went on to score his first NFL touchdown in a night game that was held at the New Orleans Saints.
After leading the Falcons defense during the 2014 season, he was offered a new contract by Atlanta Falcons. In 2015, Biermann finished the year’s season with 2.5 sacks, 55 tackles and 1 forced fumble. In 2016, Biermann signed a 1-year contract with the Buffalo Bills. Within a month, he was released by the team due to final roster cuts. Currently he is a free agent.
Personal Life
Kroy Biermann was born as Kroy Evan Biermann on September 12, 1985 in Hardin, Montana, USA, to parents Keith and Kathy Biermann. She has two elder sisters, Krista and Kelsey. Kroy studied at Hardin High School and later on, attended the University of Montana. In 2010, the footballer met Kim Zolciak and the following year, their son, Kroy Jr. was born. The couple got married the same year in Roswell, Georgia. Their second son, Kash, was born in 2012. A year later, twins, Kaia and Kane, were born to Biermann and Zolciak. The same year, Biermann legally adopted Zolciak's daughters, Ariana and Brielle (from previous relationships). 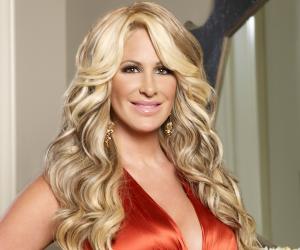