Evan Williams is an American internet entrepreneur who co-founded some of the biggest services on the internet, including Blogger and Twitter. Previously he had served as the Chairman and CEO of Twitter, and now serves on the board of directors. Born in Nebraska, he grew up on a farm where he assisted with crop irrigation in the summer. As a young man he was so interested in farming that he joined the FarmHouse International Fraternity, Inc., a professional agriculture fraternity, while he was studying in the University of Nebraska–Lincoln. However, he did not stay long enough in the university to complete his degree as he was very much interested in becoming an entrepreneur as soon as possible. He teamed up with his father to set up a company to provide instructional material about the World Wide Web which they ran for a short while. He then worked as a web developer for several computer companies before co-founding Pyra Labs. Soon Pyra Labs developed the blog-publishing service Blogger which became a huge success and was ultimately acquired by Google. His entrepreneurial spirit did not allow him to stay with Google for long and he left the company to found other ventures like Odeo and Obvious Corp. The micro-blogging service Twitter was created as a project of Obvious Corp. American People
American Men
Male Engineers
Aries Engineers
Aries Entrepreneurs
Childhood & Early Life
Evan Clark Williams was born on March 31, 1972, in Clarks, Nebraska, United States, to Monte Williams and Laurie Howe as their third child. He was raised on a farm and thus developed an early interest in farming.
While studying in school he used to assist with crop irrigation in summers. After completing high school he joined the University of Nebraska–Lincoln and studied there for a year-and-a-half before dropping out. As a university student he joined the FarmHouse Fraternity, a professional agriculture fraternity. 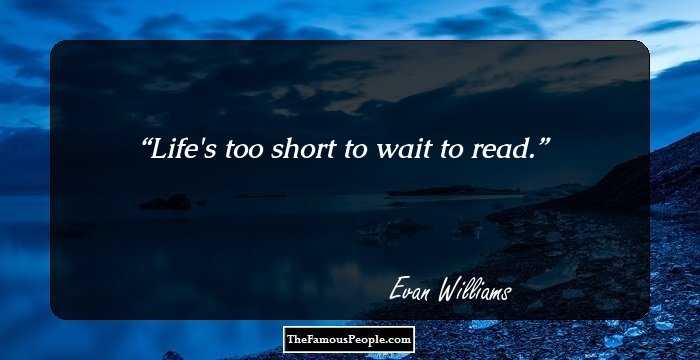 Who Is The Most Popular BTS Member?
Career
From a young age, Evan Williams wanted to be an entrepreneur. After dropping out of college he set up a company with his father to provide instructional material about the World Wide Web.
He then decided to get some experience working at computer companies and start-ups. Over the next few years he worked in a series of jobs as a web developer in companies at Florida and Texas before returning to his family farm at Nebraska.
Williams moved to Sebastopol, California in Sonoma County to work for the technology publishing company O'Reilly Media in 1996. Even though he was initially appointed in a marketing position, he worked his way to become an independent contractor writing computer code. Eventually he was also able to grab freelance opportunities with companies like Intel and Hewlett-Packard.
By the late 1990s, he decided it was time to establish his own company and teamed up with Meg Hourihan to co-found Pyra Labs to make project management software. At Pyra Labs he created many projects, one of which was spun-off as Blogger, one of the first web applications for creating and managing weblogs. The software became an immediate success and attracted the attention of Google who bought Blogger in 2003.
But Williams was not happy at Google. He once again sought the thrill only entrepreneurship could offer and left Google in 2004. He now co-founded a podcasting company, Odeo. Christopher Isaac "Biz" Stone joined Odeo the following year.
The duo was approached by software engineer Jack Dorsey regarding an idea of using text messaging and instant messaging as a way of keeping in touch with friends. Working together, they developed a prototype that would later form the foundation of the Twitter platform.
In late 2006, Williams, Biz Stone, and Jack Dorsey co-founded Obvious Corp. Odeo was sold off a few months later to Sonic Mountain. Twitter Inc. was spun-off from Obvious Corp as a separate entity in 2007. Twitter was a free social networking and micro-blogging service.
Williams served as a board member and investor in Twitter Inc. at the time of its formation. He became the CEO of Twitter in October 2008. Twitter soon became a highly successful social network with millions of users, both individuals and corporations. Also several celebrities took to Twitter, greatly increasing the popularity of the site. Williams stepped down from the CEO position in 2010.
In 2012, he co-founded Medium, a blog-publishing platform. Some of its publications include the online music magazine ‘Cuepoint’, and ‘Backchannel’, a technology publication. Medium was created with the idea of encouraging users to create longer posts than the 140-character standard of Twitter.
Major Works
His company Pyra Labs launched the blog-publishing service Blogger in 1999. It became immensely popular as one of the earliest dedicated blog-publishing tools, and was soon acquired by Google. Blogger is available in several languages including Arabic, Bengali, Bulgarian, Catalan, Korean, Latvian, Lithuanian, Vietnamese, Nepali, and Farashi.
Evan Williams is one of the co-founders of Twitter, the micro-blogging site and online social networking service that enables users to send and read short 140-character messages called "tweets". It is one of the most-visited websites in the world and as of May 2015, has more than 500 million users.
Personal Life & Legacy
Evan Williams is married to Sara M. Williams and has two children.
Recommended Lists:
Engineers #91
You May Like

See the events in life of Evan Williams in Chronological Order