Kenneth Williams was a popular British comedian who was one of the main ensemble in 26 of the 31 Carry On films, and appeared in numerous TV shows and radio comedies He was interested in theatre as a boy, but was discouraged from pursuing it by his working class parents. He served in the survey section of the British army during WWII. He used to be part of the Combined Services Entertainment group. After the war, he continued to act in repertory theatres and performed throughout the country. He aspired to be a serious actor who could do dramatic roles, but soon discovered he did not have the aptitude for it. However, his quick wit and repartees made people laugh. With radio shows such as ‘Hancock’s Half Hour’ and ‘Beyond Our Ken’, he became a household name. The segment, ‘Julian and Sandy’ became immensely popular. He appeared in many popular West End revues notably, ‘Share My Lettuce’, ‘Pieces of Eight’, and ‘One Over the Eight’. Williams is remembered for his performances in the ‘Carry On’ series of films in which he was a regular actor for two decades. The films were low-budget slapstick comedies with parodies and double-meaning dialogues, and enjoyed commercial success. He became famous for his flaring nostrils and shrill voice. The actor himself did not think much of them. After his association with the franchise ended, he switched to television. British Celebrities
British Men
Pisces Actors
British Actors
Male Comedians
Childhood & Early Life
Kenneth Charles Williams was born on February 22, 1926 to Louisa Morgan and Charles Williams, a barber. Alice Patricia, his half sister was born to Louisa out of wedlock from a relation before marriage.
He attended Lyulph Stanley School and trained to be a mapmaker's draughtsman. In 1944, he enrolled in the Army and was posted in Bombay as a part of the Royal Engineers survey section. His first stage appearance was with the Combined Services Entertainment. 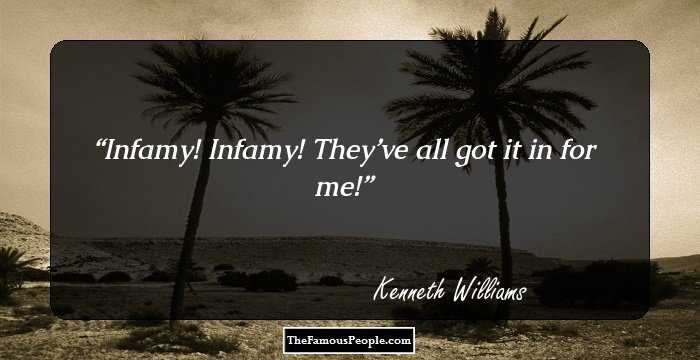 The Best Black Actresses Of All Time
Career
Kenneth Williams started his acting career in 1948, performing in repertory theatre, after he was discharged from the army, but was frustrated over his inability to do dramatic roles.
In 1954, producer Dennis Main Wilson cast him in ‘Hancock's Half Hour’, a radio series, after watching him as the Dauphin in Bernard Shaw’s ‘St Joan’. His amusing, nasal, high-pitched voice brought him recognition.
When ‘Hancock's Half Hour’ changed its format, he found himself sidelined. Between1958 and 1964, he starred on the radio show, ‘Beyond Our Ken’, anchored by comedian Kenneth Home.
In 1964, he joined ‘Round the Horne’ the sequel to ‘Beyond Our Ken’. His recurring characters included the folk singer Rambling Syd Rumpo and Dr Chou En Ginsberg, MA (failed), the Oriental criminal mastermind.
Two homosexual characters on ‘Round the Horne’ became particularly popular– Julian and Sandy played by Hugh Paddick and Kenneth Williams respectively. The sketch used double entendre, puns, adlibs and taglines.
His popularity also owed to his appearances in West End revues. In ‘Share My Lettuce’ written by Bamber Gascoigne and staged in 1957, he was cast alongside comedians Maggie Smith and Phillip Gilbert.
While the revue ‘Pieces of Eight’ in 1959, had brilliant sketches by Peter Cook, it also brought out the best in Williams in pieces such as ‘Not an asp’ and ‘The last to go’.
His final revue was, ‘One Over the Eight’ performed in 1960. He performed in all its routines. The revue is more known for Peter Cook’s sketches than for Williams’s performance.
He starred in the play, ‘My Fat Friend’ written by Charles Laurence. The play was staged in 1972. He also starred with Ingrid Bergman in a Bernard Shaw play, ‘Captain Brassbound's Conversion’.
Continue Reading Below
Between1958 and 1978, he appeared in 26 low-budget comedy films of the ‘Carry On’ franchise. He played a variety of characters including the prudish, nasty, arrogant, and snobbish types.
He began to appear on ‘Just a Minute’, a radio panel game on BBC, from 1968. He was good at talking non-stop on any subject and talked about a fictional psychiatrist for almost a minute.
On television, he contributed regularly to ‘Whats My Line’, appeared on ‘Michel Parkinson’s Chat Show’ and ‘Wogan Talk Show’. He also lent his voice to many characters on the Cartoon series, ‘Willo the Wisp’.
Major Works
Kenneth William’s comic portrayal of Julius Caesar as a scared coward who hides behind his bodyguard in ‘Carry on Cleo’ made it one of the 12 most popular British movies in 1965.
In the 1968 film, ‘Carry on… up the Khyber’, considered the best of the Carry On franchise, he plays the villainous Khasi of Kalabar. Set in British India, his wisecracks teased the British stereotype.
Awards
In 2009, a plaque to commemorate his life was unveiled at his father’s barber shop in Marchmont Street, London, where he resided between 1935 and 1956.
The British Comedy Society commissioned a plaque in 2010, which was unveiled in the lobby of the New Diorama Theatre, in the Regent’s Place by the Mayor of Camden.
On his 88th birth anniversary, a blue plaque was unveiled at Flat 62, Farley Court, Marylebone Road, which was his residence between the years 1963 and 1970.
Personal Life & Legacy
Kenneth Williams had an uneasy relation with his father, Charlie. Charlie died after consuming carbon tetrachloride stored in a cough mixture bottle. Scotland Yard considered him a suspect in his father’s death.
Published posthumously, his diaries revealed that he suffered from depression and loneliness as a result of professional failure and ill-health. He could never come to terms with his homosexuality.
He was discovered dead due to an overdose of barbiturates. It is still a mystery whether it was an accidental death or suicide. He was cremated at East Finchley Cemetery.
A BBC Four play, ‘Kenneth Williams: Fantabulosa!’ was televised in 2006. It starred Michael Sheen as the comedian, while Cheryl Campbell played his mother, Lou.
In 2008, a programme ‘The Pain of Laughter: The Last Days of Kenneth Williams’ aired on BBC. A biography ‘Born Brilliant: The Life of Kenneth Williams’ by Christopher Stevens was published two years later.
Trivia
His one-liner, "Infamy, infamy, they've all got it in for me", was chosen the greatest one-liner in movie history by a survey of writers, actors and comedians.
You May Like

See the events in life of Kenneth Williams in Chronological Order