Kazimir Malevich is a Russian painter most famously known for having founded the Suprematism movement in art. Born to a family of Polish religious refugees, Kazimir was drawn to the fine arts as a young child and taught himself to paint by watching local peasants. Traveling through the greater Russian Empire in the company of his father, Kazimir was exposed to the greatest artists of the age. As a young man, Kazimir Malevich decided to focus on improving his technique, and became a hard-working student at a prestigious art institute. After graduating, this budding artist began to experiment with his own techniques, eventually becoming the vanguard painter in a new art movement. As respect for Kazimir Malevich's work grew, the flower of Russian art began to blossom, and soon he had a worldwide audience appreciating his creations. Exploring new textures and materials, he broke many conventional ideas about what modern paintings could be. Kazimir remained wedded to the arts, working several times as the stage decorator for several hit plays and operas. Malevich then parlayed his deep experience into a long career as a respected professor of the arts. At the time of his death, Kazimir Malevich's works were celebrated worldwide for their innovative use of color, style and technique Jean-Michel Bas...
Artists #75
Artists & Painters #67
Continue Reading Below
DID WE MISS SOMEONE?
CLICK HERE AND TELL US
WE'LL MAKE SURE
THEY'RE HERE A.S.A.P
Quick Facts

Russian Celebrities
Russian Men
Russian Artists
Russian Artists & Painters
Male Artists & Painters
Childhood & Early Life
Kazimir Malevich aka Kazimierz Malewicz was born on February 23, 1879 in the Kiev Governorate of the Russian Empire. His parents, father Ludwika, and mother, Seweryn Malewicz, were native of Poland and Roman Catholics, religious refugees from the Kopyl Region of Belarus.
He was born to a large family, being one of 14 children. Five of his siblings did not survive childhood.
His father worked as a shift manager at a sugar factory. His job required him to tour sugar beet plantations and he often took his family along with him for these extended trips.
In 1895, Malevich studied drawing at a local school in Kiev. The following year he moved to Kursk and continued painting.
In 1904, Malevich's father died and using his inheritance, the aspiring painter moved to Moscow and enrolled at the ‘Moscow School of Painting, Sculpture and Architecture’. 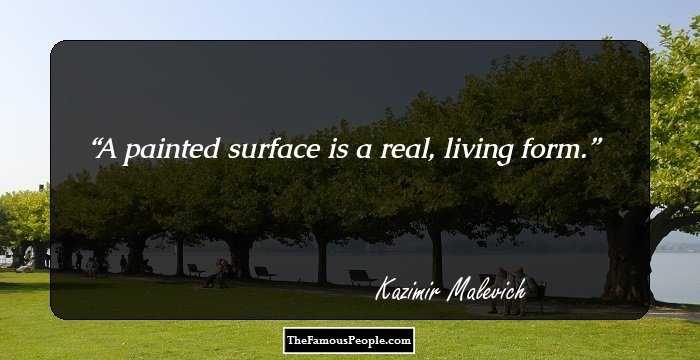 The Hottest Male Celebrities With The Best Abs
Career
In 1910 after graduating from the school, his artistic skills greatly improved under the tutelage of famed painter Fedor Rerberg. The next year, Malevich had one of his paintings shown at a prestigious exhibition in St. Petersburg.
In 1912, he developed his 'Cubo-Futuristic' style of painting. During the same year, he participated in his third exhibition in St. Petersburg and his first in Moscow.
In 1914, the talented painter created and designed the stage set of the opera 'Victory Over the Sun'. The opera played to packed houses and made Malevich a celebrity. In the same year, he exhibited his paintings in the renowned 'Salon des Independants' in Paris, France.
In 1915, he developed the foundations of Suprematism in his first book, 'From Cubism to Suprematism'. For the next year, he lived in an artists' cooperative in the village of Verbovka, where he produced his masterpiece 'Black Square'.
In 1916, his paintings were featured as part of the 'Jack of Diamonds' artists' group that included Nathan Altman, David Burliuk and Aleksandra Ekster. It was during this period that he painted 'Suprematist Composition'.
In 1918, Malevich first exhibited his famous 'White On White' painting. In the same year, he was hired as a set decorator for the play 'Mystery Bouffe'. After the Russian Revolution, he became a member of the ‘Collegium on the Arts of Narkompros’, the ‘Commission for the Protection of Monuments and the Museums Commission’.
From 1919-1922, he taught as a professor at the ‘Vitebsk Practical Art School’ in Belarus.
From 1922-1927, he taught at the ‘Leningrad Academy of Arts’. During the same time he published the book 'The World as Non-Objectivity'.
In 1927, he traveled to Warsaw, Poland and was feted during a retrospective of his most celebrated works.
Continue Reading Below
From 1927-1930, the exceptional painter taught as a professor at the ‘Kiev State Art Institute’ and the ‘House of the Arts’ in Leningrad.
In 1934, most of Malevich's paintings were declared incompatible with acceptable Soviet thought, and were removed from public display. 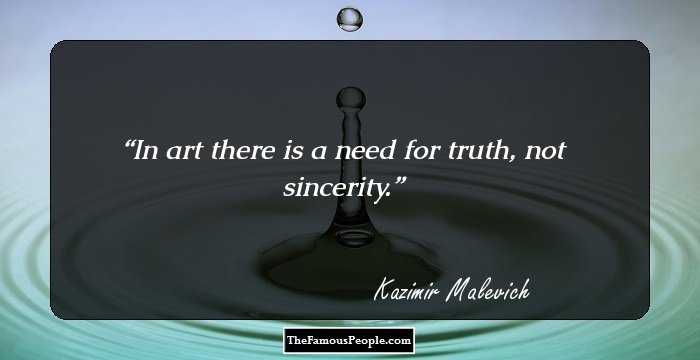 Quotes: Need, Art
Major Works
Malevich's most notable works were the inventive paintings 'Black Square', first released in 1915, and its companion piece, 'White On White', created in three years later.
His painting the 'Black Square' was purchased in an auction in 1933 for $250,000. In 2002, the painting was sold at auction for $1 million.
The painting 'Suprematist Composition' was sold at auction at Sotheby's in New York for $60 million.
Personal Life & Legacy
On 15 May, 1935, Malevich passed away after a long bout with lung cancer. His famous creation 'Black Square' was hung on the wall above his deathbed.
A non-profit charity named 'The Rectangular Circle of Friends of Kazimierz Malewicz' was founded in 2013. The charity's goal is to promote awareness of Kazimir's Polish ethnicity. 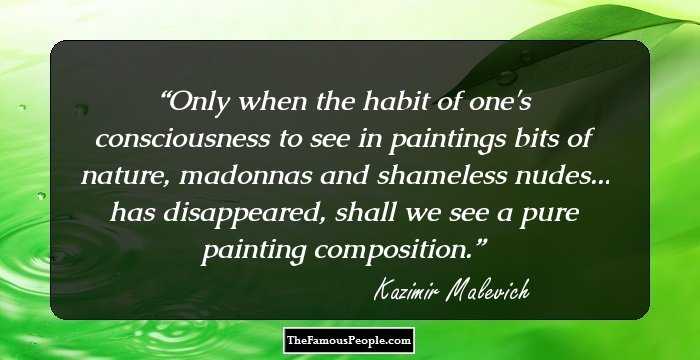 Quotes: Nature
Trivia
Although Kazimir Malevich was best known around the world by the Russianized version of his name, he always signed his paintings with his Polish name, Kazimierz Malewicz.
From 1911-1990, the Brocard company produced a line of eau de cologne named 'Severny'. The label and packaging were designed by this renowned painter
You May Like

Quotes By Kazimir Malevich | Quote Of The Day | Top 100 Quotes

See the events in life of Kazimir Malevich in Chronological Order