Kathleen Ireland or Kathy Ireland as she is popularly known is a model trned entrepreneur from America. Her rise in the world of modelling to the boardroom of one of the leading brands in design and marketing is an inspiration for many. Since childhood she possessed an industrious bent of mind and instead of stocking her creations, like the hand painted rocks, she would try and sell them in her neighbourhood. She began her modelling career while she was in her late teens and with her auburn hair and green eyes, the diva never had dearth of work. She featured on the covers of renowned fashion magazines such as the Vogue and Cosmopolitan, but the highlight of her modelling career was her appearance on the cover of the 25th anniversary edition of the Swimsuit Issue of the Sports Illustrated magazine. It was during one of her modelling assignments that she came up with the idea of providing affordable and quality fashion to all segments of the consumer market. Thus came into being, the brand licensing and design company, 'kathy ireland Worldwide'. The License Global Magazine ranks her company as the 28th most powerful brand internationally. The company's annual retail sales of $2 billion have made her one of the richest models. To know more about her life and works read on American People
Actresses
Business Women
American Women
California Actresses
Childhood & Early Life
Kathleen Marie Ireland was born to parents John and Barbara Ireland on March 20, 1963, in Glendale city of the Los Angeles County. She has two siblings Mary and Cynthia Ireland.
Ever since childhood, Kathleen was highly industrious and would sell hand-painted rocks and even worked as a paper boy. 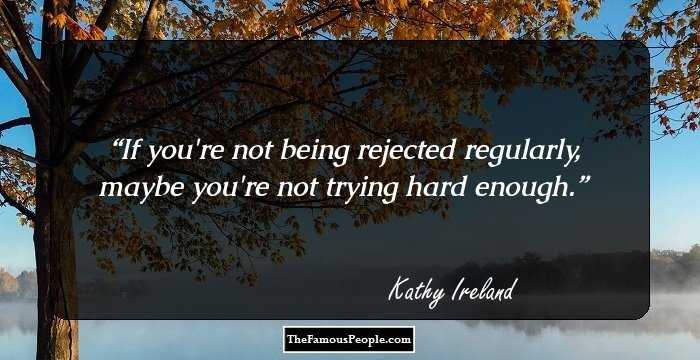 See the events in life of Kathy Ireland in Chronological Order