Katherine Boyer Waterston is an English-born American actress. She made her feature film debut in the movie ‘Michael Clayton’. In her career so far, she has appeared in many films, such as ‘Robot & Frank’, ‘Steve Jobs’ and ‘Fantastic Beasts and Where to Find Them’. Waterston was born in Westminster, London. Before beginning her career, she earned a BFA in acting from Tisch School of the Arts. She began her onscreen career with a minor role in the legal thriller film ‘Michael Clayton’, which was a financial success and received critical acclaim. She later rose to popularity with her roles in films like ‘Robot & Frank’, and ‘Inherent Vice’. She achieved further success after she appeared in the movie ‘Fantastic Beasts and Where to Find Them’ in a main role. It was a spin-off of and a prequel to the famous Harry Potter film series. The film was a huge success, critically and commercially, and won several awards. She also appeared in the 2018 sequel ‘Fantastic Beasts: The Crimes of Grindelwald’. 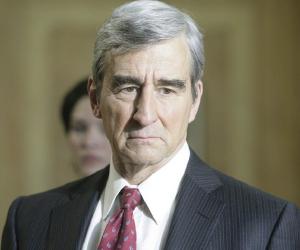 American People
British People
British Women
New York University
Tall Celebrities
Tall Female Celebrities
Career
Katherine Waterston began her acting career with the 2003 play ‘Smashing’, and after that, she acted in the 2007 play ‘Los Angeles’. She made her feature film debut in the 2007 legal thriller film ‘Michael Clayton’. Directed by Tony Gilroy, the film was a commercial success, earning over $90 million on a budget of around $21 million. It also received critical acclaim and won several awards and nominations.
She then appeared in films like ‘Taking Woodstock’ (2009) and ‘Enter Nowhere’ (2011). Her popularity increased as she continued playing supporting roles in movies, such as ‘Robot & Frank’ (2012), ‘Being Flynn’ (2012), and ‘Night Moves (2013). In 2014, she starred in the film ‘Inherent Vice’ in an important role. Though the film was a commercial failure, it was met positively by the critics. Other projects that gained her popularity include the 2015 film ‘Steve Jobs’. Though the film received mostly positive reviews, it was not very successful commercially.
She gained further fame in 2016 after her role in the fantasy film ‘Fantastic Beasts and Where to Find Them’. The film was a prequel to and a spin-off of the famous Harry Potter film series. She portrayed Porpentina Goldstein, one of the main characters.The movie was a commercial success and also well-received by the critics. The film was nominated for several awards, including two Oscar nominations and five BAFTA award nominations, out of which it won nine, including one BAFTA award.
In 2017, she appeared in the films ‘Alien: Covenant’ and ‘Logan Lucky,’ and both turned out to be commercially and critically successful. She also played an important role in the film ‘Current Year’ released the same year.
Her next important work was the 2018 film ‘Fantastic Beasts: The Crimes of Grindelwald’, the sequel to ‘Fantastic Beasts and Where to Find Them’. Though it was also a critical and commercial success, it was not as successful as the 2016 prequel. One of her most recent projects is the 2019 film ‘Amundsen.’
Recommended Lists:

Pisces Actresses
British Actresses
American Actresses
Actresses Who Are In Their 40s
Continue Reading Below
Family & Personal Life
Katherine Boyer Waterston was born on March 3, 1980, in Westminster, London, UK. She was raised in Connecticut. Her father is Sam Waterston, an actor, and her mother is Lynn Louisa, a former model. Her brother, Graham Waterston, is a director, and her sister, Elisabeth Waterston, is an actress. She has a half-brother as well, James Waterston, who is also an actor.
She attended the Loomis Chaffee School and graduated in 1998. She later earned her BFA in acting from Tisch School of the Arts at New York University.
She was revealed to be pregnant in November 2018. However, there has been no further update regarding her pregnancy or baby as of August 2019.
Recommended Lists: