Advanced Search
Television journalist Katie Couric showed signs of her journalistic ability as an undergraduate student of the ‘University of Virginia’. She began her career with ABC, but left to serve CNN as a reporter, for the next seven years. She joined NBC as their White House Correspondent, and began to substitute for the regular anchor of NBC’s morning newsmagazine, ‘Today’. She eventually replaced its host Deborah Norville. Viewers loved her for her pleasant appearance, and admired her assertive style. ‘Today’ became the most watched news program in the morning slot. After 15 years with NBC, she moved to CBS News, and became the anchor of ‘CBS Evening News with Katie Couric’. The program won many ‘Emmy Awards’, and she became the only solo female anchor for the evening news in America. Her series of interviews for CBS called ‘The Sarah Palin interviews with Katie Couric’, were so decisive during the Presidential elections that it destroyed Republican prospects of winning. She became a correspondent for the CBS’s ‘60 Minutes’. Her first experience as a web show host came with ‘@katiecouric’ on CBSNews.com. Steve Harvey
DID WE MISS SOMEONE?
CLICK HERE AND TELL US
WE'LL MAKE SURE
THEY'RE HERE A.S.A.P
Quick Facts

American People
Journalists
TV Presenters
American Women
University Of Virginia
Childhood & Early Life
Katherine Anne “Katie” Couric was born on January 7, 1957 to Elinor Tullie, a part-time writer, and John Martin Couric, a Public Relations Officer with ‘The Atlanta Journal-Constitution’ and the ‘United Press’ in Washington, D.C.
She attended the ‘Arlington Public Schools’, a group of schools considered one of the best in the country. As a high school student, she gained invaluable experience interning at the radio station WAVA.
Between 1975 and 1979, she studied at the ‘University of Virginia’ for a degree in English. There, she was a ‘Delta Delta Delta’ sorority member, and served the university’s newspaper, ‘The Cavalier Daily’. 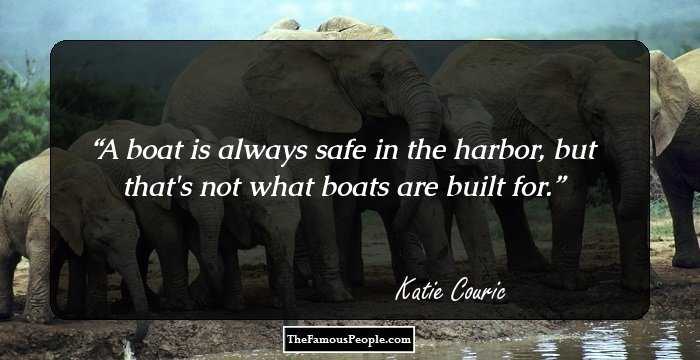 Continue Reading Below
Career
Couric began her career with the ABC News bureau in Washington, D.C. in 1979. Subsequently, she worked for CNN as an Assignment Editor, and as a Reporter for WTVJ in Miami and NBC’s WRC-TV.
In 1989, she joined NBC News as Deputy Pentagon Correspondent. For the next two years, she substituted for the host, co-anchor and co-host of the programs, ‘Today’, ‘Sunday Today’ and ‘NBC News at Sunrise’.
In 1991, when Deborah Norville did not return after her maternity leave, Couric took her place as the permanent co-anchor of the NBC program, ‘Today’. She stayed with NBC for the next fifteen years.
For NBC, she hosted several specials including ‘Everybody’s Business: America’s Children’, ‘Legend to Legend Night: A Celebrity Cavalcade’, and ‘Harry Potter: Behind the Magic’, and co-hosted the Olympic Games’ opening ceremonies.
She interviewed many political personalities including Presidents Ford, Carter, George H. W. Bush, Clinton, and George W. Bush. She was the first and last person to interview John F. Kennedy, Jr., for NBC.
She entered CBS as the Anchor and Managing Editor of ‘CBS Evening News’, in 2006. The program used a new set, better graphics, and a theme composed by Oscar winning composer James Horner.
CBS had hoped that she would revive the news program, but she failed to sustain the initial excitement; the show took the third spot in viewership behind ‘ABC World News’ and ‘NBC Nightly News’.
For CBS, she interviewed many prominent personalities including President Obama, Secretary of State Hillary Clinton, Former Secretary of State Condoleezza Rice, the Israeli Foreign Minister Tzipi Livni, Norah Jones, and Michael J. Fox.
She was the first anchor to reach Port au Prince to report the Haiti Earthquake. She also covered the BP oil spill, the Egyptian Revolution, and Prince William’s wedding.
Continue Reading Below
Between 2006 and 2011, as a ‘60 Minutes’ correspondent , she contributed many stories, and interviewed airline pilot Chesley Sullenberger, former CIA Operations Officer Valerie Plame, and educationist Michelle Rhee for the program.
She was the chief reporter of two CBS Reports series – the award winning ‘CBS Reports: Children of the Recession’ in 2009, and ‘CBS Reports: Where America Stands’, two years later.
Between 2009 and 2011, she hosted a weekly interview program on CBSNews.com. Her guests included newsmakers Al Gore, Hugh Jackman, Shakira, Michelle Obama, Thomas Friedman, Justin Bieber, Ellen DeGeneres, and Daniel Radcliffe, among others.
Since 2011, she is a special correspondent for ABC News, and has co-anchored coverage of the 10th anniversary of the 9/11 attacks, and guest co-hosted ‘The View’ and ‘Live! with Regis and Kelly’.
She is anchoring a weekly web talk show called, ‘Katie’s Take’ for ABC News. It includes discussions with experts in various fields. In 2013, she was hired as the Global Anchor of Yahoo News. 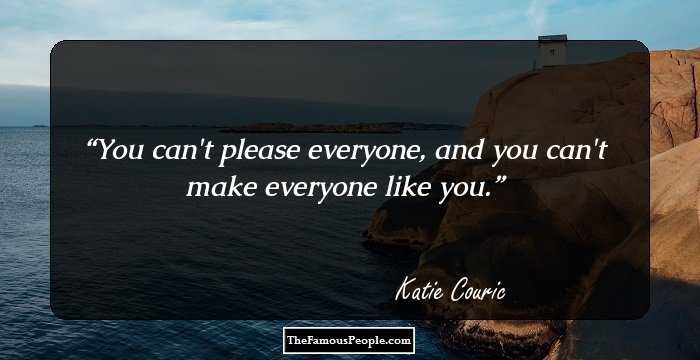 Quotes: You, Like
Major Works
‘The Sarah Palin Interviews with Katie Couric’, broadcast before the 2008 U.S. presidential election on CBS Evening News destroyed Palin’s chances of Vice- Presidency. Around 10 million people watched clips of the interview on YouTube.
As the Anchor and Managing Editor of ‘CBS Evening News’ from 2006 to 2011, Couric won many awards, and was the only solo female evening news anchor in the U. S. for three years.
Awards & Achievements
Katie Couric has won many awards for television reporting through her career, including the prestigious ‘Peabody Award’ for her series ‘Confronting Colon Cancer’.
From 1994 to 2004, she shared six ‘Daytime Emmy Awards’, in the ‘Outstanding Special Class Program’ category for ‘Macy’s Thanksgiving Day Parade’ with her co-hosts and producers.
In 2009, she was presented a ‘Gracie Allen Award’ in the category ‘Outstanding Anchor - News or News Magazine’ for ‘CBS Evening News with Katie Couric’. Gracie Allen was a successful comedienne and activist.
‘CBS Evening News with Katie Couric’ won ‘Emmys’ for ‘Outstanding Investigative Journalism in a Regularly Scheduled Newscast’ for two consecutive years from 2010. She also won an Emmy for ‘Outstanding Interview’ for ‘60 Minutes’. 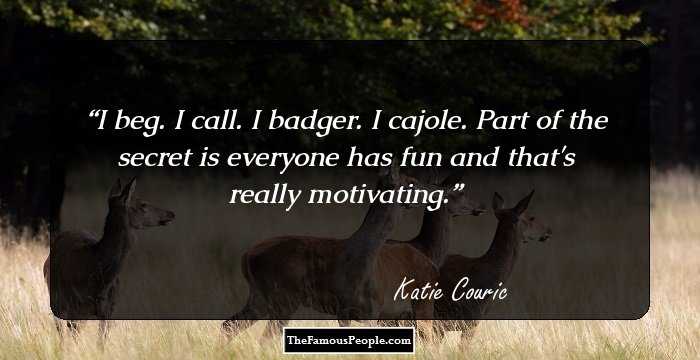 Quotes: I
Personal Life & Legacy
Couric was married to Jay Monahan, an attorney, from 1989 to 1998, when he died of colon cancer. They had two daughters - Elinor and Caroline. Presently, she is engaged to financier John Molner.
After Monahan’s death due to colon cancer, she has been promoting colon cancer awareness and underwent a televised colonoscopy. She telecast her own mammogram for her breast cancer awareness.
Trivia
This TV news anchor was accused of plagiarism after her producer lifted substantial portions from a ‘Wall Street Journal’ column by Jeffrey Zaslow for the anchor’s one-minute commentary about the importance of reading.
This good-looking news anchor declared, “I could announce one morning that the world was going to blow up in three hours and people would be calling in about my hair!”
Recommended Lists:
Media Personalities #395

Quotes By Katie Couric | Quote Of The Day | Top 100 Quotes

See the events in life of Katie Couric in Chronological Order