Katie Holmes has a lot more to her than just her charming and attractive self. A talented and effervescent actress, Holmes turned to acting after she was coaxed by her teacher to partake in a modelling contest. Her great singing and dancing ability coupled with her impressive acting skills earned her an early breakthrough. She earned her first ever professional role in 1997 in the film, ‘The Ice Storm’, which she followed up with ‘Disturbing Behaviors’ and ‘Go’ the following year. Moving up the ladder, she bagged a lead role in the film, ‘Teaching Mrs Tingle’. Her role was much appreciated as the flick. While most of her films did well at the box office, the big blockbuster hit eluded her until 2004. In 2005, however, she hit it big with the film, ‘Batman Begins’ which gained much critical and popular success. Over the years, she has been a part of several films and television series. While her acting career did brought her to attention, it was the events in her personal life, affair and eventual marriage and divorce with famed actor Tom Cruise, that gained more limelight overshadowing her career. Katie Holmes was born as Kate Noelle ‘Katie’ Holmes on December 18, 1979, to Kathleen and Martin Joseph Holmes, Sr. She was the youngest of five children born to the couple.

Raised as a Roman Catholic, she attended the Christ The King Church in Toledo. She completed her preliminary education from the all-girls Notre Dame Academy and her higher education from Columbia University.
Since an early age, young Holmes was bitten by the acting bug. She participated in the school musicals and started attending modelling classes at a special training school.
Coaxed by her teacher, she participated in the International Modelling and Talent Association Competition held in New York City in 1996. Her impressive recitation of the monologue from ‘To Kill a Mockingbird’ gained her many awards in the competition. 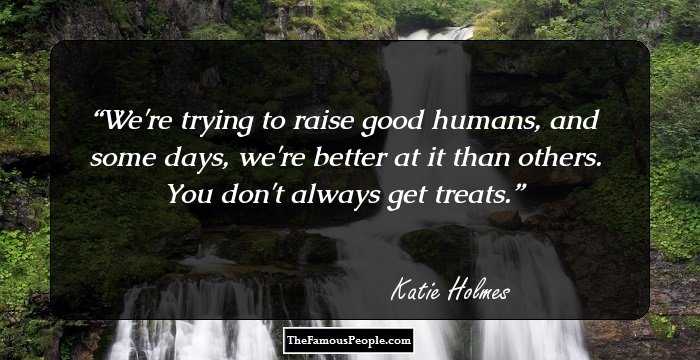 Quotes: You, Trying
Continue Reading Below
Career
Her ground-breaking performance of the monologue inspired her to take up acting professionally. She moved to Los Angeles and started auditioning for roles. Her impressive personality and talent earned her the role of Libbets Casey in the Ang Lee’s film ‘The Ice Storm’.
Following her successful launch, she auditioned for the role of Joey Potter, the tomboyish character and Dawson’s best friend, for the television series, ‘Dawson’s Creek’. Despite auditioning on videotapes, she won the role.

‘Dawson’s Creek’ opened to the audience in 1998, to mixed reviews. While the series was appreciated by the critics and audience, her role as Dawson’s best friend earned her national attention.

While being a series regular in the television show, she took to the big screen and was featured in the film, ‘Disturbing Behavior’ in 1998. Though the film averaged at the box office, it won her a couple of awards. She followed this up by playing the character of a cynical supermarket clerk in ‘Go’ and an A-ranking student in ‘Teaching Mrs Tingle’
Rubbing off her cute-girl-next-door image, she took up challenging roles in her next couple of films released in 2000. While in “Wonder Boys’ she played the role of a college student who is madly in love with a college professor, in ‘The Gift’ she played a different type of temptress.
In 2002, she was seen in the movie, ‘Abandon’, in which she played the character of a delusional, homicidal college student. She followed this up by playing the role of a mistress of the public relations agent in ‘Phone Booth’ and Robert Downey, Jr.'s nurse in ‘The Singing Detective’.
With the end of the ‘Dawson’s Creek’ television series in 2003, she continued to look for challenging opportunities to display her acting latent. The same year, she played the title character of April in the film, ‘Pieces of April’ a gritty comedy. Her performance was much appreciated by the critics who labelled it as her best performance until then.
In 2005, she starred in the big-budget film, ‘Batman Begins’, opposite Christian Bale. The film went on to become the most successful film of her career. However, her portrayal of the role of Rachel Dawes, Batman’s childhood sweetheart met with dismal reviews.
Post 2005, she took a hiatus from acting for about two years to raise her kid. In 2008, she made a comeback to the film industry with the comedy ‘Mad Money’. However, the riposte did not do much to revive her career, as her performance was widely criticized and mocked at.
Continue Reading Below
Not the one to be disheartened, she moved to the small screen and starred in an episode of the television show, ‘Eli Stone’ as Grace, a lawyer. Following this, she made her Broadway debut with the Arthur Miller’s show, ‘All My Sons’
In 2009, she started filming for the remake of the 1970s tele-film ‘Don’t Be Afraid of the Dark’. The film was released to the audience in 2011. Other films which she was a part of include, ‘The Son of No One’ and ‘Jack and Jill’ 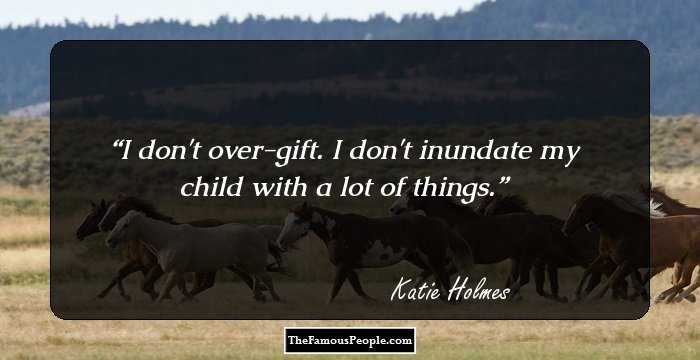 Awards & Achievements
She won the MTV Movie Award for Best Breakthrough Performance for her role of Rachel Wagner in ‘Disturbing Behavior’.
In 2011, she received the Women in Film Max Mara Face of the Future Award.
In 2005, she was ranked No. 38 on TV Guide’s ‘50 Sexiest Stars of All Time’.
Personal Life & Legacy

Katie Holmes was romantically involved with Joshua Jackson, her co-star from ‘Dawson’s Creek’. Later on, she got engaged to actor Chris Klein in 2003. However, the engagement did not work out and the two officially separated in 2005.

Soon after, she started dating actor Tom Cruise. After weeks of being in a committed relationship, the duo got engaged in June 2005, and went on to tie the nuptials in November 2006. Meanwhile in April 2006, she was blessed with a daughter Suri Cruise.

The marriage did not work out for long and was annulled in July 2012. She was given the custody of her daughter Suri Cruise. 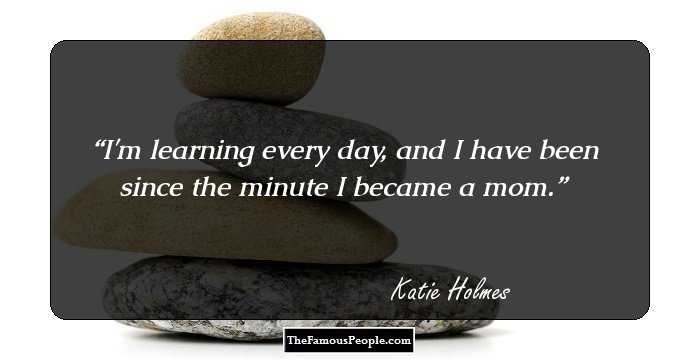 Quotes: Learning
Trivia
This American actress of the ‘Dawson’s Creek’ fame is mentioned in the song, ‘High School Never Ends’, by Bowling for Soup.

Quotes By Katie Holmes | Quote Of The Day | Top 100 Quotes

See the events in life of Katie Holmes in Chronological Order