(First Black Woman to Star in a Major Motion Picture, the 1927 Silent Film 'Siren of the Tropics')

Proclaimed to be 'the most sensational woman anyone ever saw' by Ernest Hemingway, Josephine Baker was one of the most successful entertainers in France and other parts of Europe. She scintillated audiences with her mesmerising dance performances and went on to become ‘the highest-paid chorus girl in vaudeville’. Much revered for her exotic beauty, Baker enjoyed celebrity status for 50 almost years. She also acted in a few films. Unfortunately, racism laid constraints in her career and she was not well received in the United States of America. She served as a source of intelligence during the World War II, gathering secret information about German troops, supporting the French Resistance movement. This earned her one of the highest French military honours, the ‘Croix de guerre'. She made several notable contributions to the Civil Rights Movement, blatantly refusing to perform in segregated clubs and participating in active demonstrations. She also delivered a speech alongside Martin Luther King, Jr at the ‘March on Washington’. She had a huge fan-following and was given the nicknames, 'Black Pearl', 'Bronze Venus' and ‘Creole Goddess’. Vanessa Paradis
3rd June In History
DID WE MISS SOMEONE?
CLICK HERE AND TELL US
WE'LL MAKE SURE
THEY'RE HERE A.S.A.P
Quick Facts

Cause of Death: Intracerebral Hemorrhage

French Celebrities
Singers
Dancers
Actresses
French Women
Childhood & Early Life
She was born as Freda Josephine McDonald in St. Louis, Missouri, to Carrie McDonald, a washerwoman and Eddie Carson, a vaudeville drummer. Her father abandoned the family soon after her birth.
She started working as a domestic help when she was eight. She was often abused and poorly treated by her employers. After a brief time in school, she lived as a street child in the slums of St. Louis, often eating from garbage.. 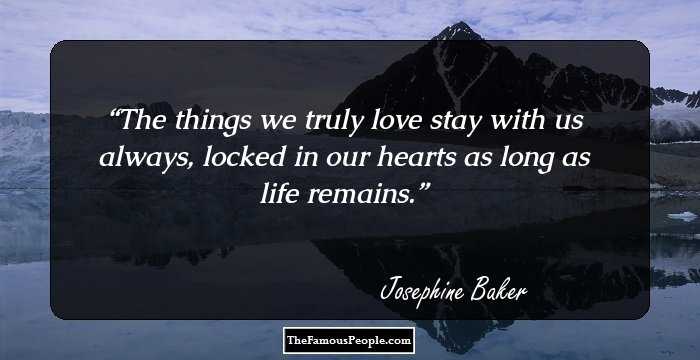 Quotes: Life, Love
Continue Reading Below
Career
At 15, she became a part of a vaudeville show in the St. Louis Chorus. She soon landed in New York City, where she performed at the 'Plantation Club'. In 1921, she was part of the Broadway revue, 'Shuffle Along'.
In 1924, she was part of the Broadway revue, 'The Chocolate Dandies'. The next year, she went to Paris to be a part of the show in 'La Revue Negre', which opened at the Theatre des Champs-Elysees.
In Paris, she earned fame and popularity for her erotic dancing. She went on a Europe tour, performing at various places. She later performed, ‘Dansesauvage', wearing a skirt made of artificial bananas.
In 1926, she performed at the Folies Berg�re music hall for 'LaFolie du Jour'. With this show, she became one of the most popular and highly paid dancers. She was also appreciated by literary figure, Ernest Hemingway.
In 1927, she starred in the silent film, ‘Siren of the Tropics’. The film was not successful outside Europe. After four years, she sang, ‘J'aideux amours', which gained immense success.
In 1934, she played the lead role in 'La Creole', a revival al of Jacques Offenbach's opera. The show opened at the Theatre Marigny, Paris, and ran for six months. That year, she was also seen in the film, ‘Zouzou'.
Around 1935, when he came to the U.S, she did not receive the same success and adulation that she had received in Europe. This was due to the unwillingness of American audiences to accept an African-American woman.
In November 1935, she played the role of a Tunisian local girl named 'Alwina' in the film, 'Princess Tam Tam', which was directed by Edmond T. Gr�ville. Later, she starred in ‘Faussealerte' and 'Moulin Rouge'.
In 1939, when Germany and France were at war, she was appointed as an ’honourable correspondent’ by the French military organisation, Deuxieme Bureau.
Continue Reading Below
She supported the French Resistance during World War II, gathering information about the German troops. She performed in North Africa in 1941 and later toured Spain, pinning notes and gathering military information.
After the war, she devoted more time to her family. In the 1950s, she went to the United States to support the Civil Rights Movement and took part in various demonstrations. She condemned segregated clubs and public venues.
In 1951, after she was denied service at the Stork Club in Manhattan, she filed a case of racism against the owner of the club, Sherman Billingsley. Actress Grace Kelly too walked out of the club with her, in her support.
In 1954, she starred in the film, 'Anjedem Finger zehn'. The following year, she was seen in the film 'Carosello del variet�'.
In 1963, she was one of the speakers who spoke alongside Martin Luther King Jr. at the ‘March on Washington’, one of the largest political rallies that took place for human rights.
In January 1966, she received an invitation from Cuban communist revolutionary, Fidel Castro to perform at the 7th anniversary of his revolution in Havana, Cuba. The show was held in April and had a record-breaking number of attendees.
In 1973, she delivered a performance at the Carnegie Hall in New York. After the performance she received a standing ovation.
In 1974, she performed for a Royal Variety Performance at the London Palladium. That year, she also performed for the Monacan Red Cross Gala, just before she commemorated the 50th year of her dancing career.
In April 1975, she performed at the Bobino Theater in Paris on the 50th anniversary of her dancing career. The event witnessed many celebrity attendees.
Continue Reading Below 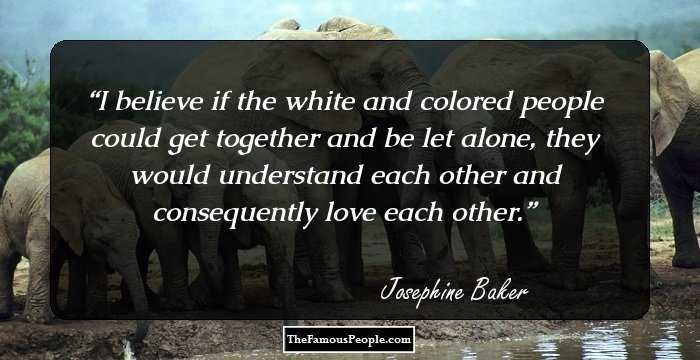 Quotes: Love, Together, Alone, Believe, I
Awards & Achievements
In 1961, she was awarded the Croix de Guerre and the Legion of Honour, highly esteemed French military honours for her role in the French Resistance movement.
Personal Life & Legacy
In 1918, when she was 13, she married Willie Wells. The marriage did not last very long and the couple divorced in a short span of time.
In 1921, she married Willie Baker. The couple eventually legally separated. Despite the separation, she kept her last name as she was recognised by that name.
In 1937, he married French citizen Jean Lion. Through the marriage she was also granted French citizenship. The couple separated and he passed away later.
In 1947, she married Jo Bouillon, a French composer. It was during this marriage that she adopted 12 children from around the world. They eventually divorced.
After her divorce, she became romantically involved with a man named Robert Brady.
She died at the age of 68, after she suffered from a severe coma due to cerebral haemorrhage. Her funeral was held at the L'Eglise de la Madeleine, where her burial received French military honours.
She was inducted into the St. Louis Walk of Fame and the Hall of Famous Missourians.
Located in the Montparnasse Quarter of Paris, Place Josephine Baker is named after her.
Her house, ‘Ch�teau des Milandes’ is listed as a ‘monument historique’ by the French Ministry of Culture.
In 1991, a biographical TV film based on her life titled, ‘The Josephine Baker Story’ was broadcast on HBO.
She has been depicted in many works of art, be it in films, literature or television. She was portrayed in the musical, ‘A La Recherche de Josephine - New Orleans for Ever', the films, 'Frida', 'Anastasia','Les Triplettes de Belleville', 'Das Boot' and 'Midnight in Paris'.
She was referenced in the works of literature,‘Es Muss NichtImmerKaviarSein', 'Josephine's Incredible Shoe & The Blackpearls' by Peggi Eve Anderson-Randolp, and the play 'Josephine and I'.
American singer and actress, Beyonc� Knowles is immensely influenced by her. She wore a version of her ‘Dansebanane’ costume for the song 'Deja Vu'. She was also seen dancing in a champagne glass named, '� La Baker' in one of her music videos, 'Naughty Girl'. 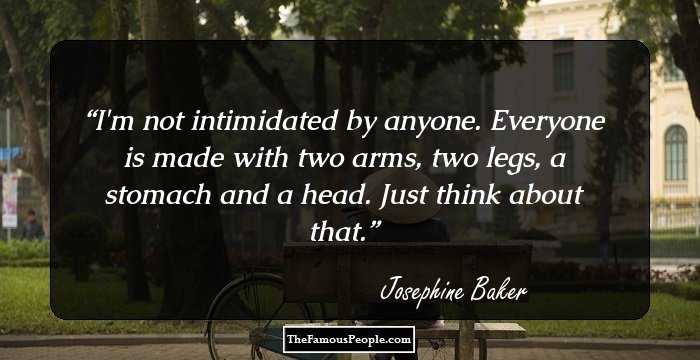 Quotes: Think
Trivia
This American-born dancer, actress and civil rights movement supporter adopted 12 children from different ethnicities and called them the 'The Rainbow Tribe'. She did this is to prove to the world how ‘children of different ethnicities and religions could still be brothers'.
Recommended Lists:
Film & Theater Personalities #522

Quotes By Josephine Baker | Quote Of The Day | Top 100 Quotes

See the events in life of Josephine Baker in Chronological Order