Joseph Story was an American lawyer and jurist who served as an Associate Judge on the Supreme Court of the United States in the nineteenth century. He was the youngest Associate Justice at time - he was only 32 years old when he was elected for the position and even until today, he remains the youngest Supreme Court Justice at appointment. On this important position, Story brought in many impending changes in the law of the United States, like, founding the department of admiralty law in the federal courts, working towards equity jurisprudence and building a department of patent law, standing upfront against slave trade, etc. He did not only sit in the Supreme Court but also was the first Dane Professor of Law at Harvard University. He was apparently a much beloved teacher, since his active position in the Supreme Court helped his students understand the current occurring in the American law in greater details. He was also one of the celebrated writers of his time and wrote many books, articles and essays on various topics of law. Ron DeSantis
Lawyers #539
Judges #92
Miscellaneous #3764
Continue Reading Below
DID WE MISS SOMEONE?
CLICK HERE AND TELL US
WE'LL MAKE SURE
THEY'RE HERE A.S.A.P
Quick Facts

American People
American Men
Harvard University
Male Lawyers
American Judges
Childhood & Early Life
Joseph Story was born in Marblehead, Massachusetts to Dr. Elisha Story and Mehitable Pedrick Story. His father was a member of Sons of Liberty. Story was born out of his father’s second marriage.
Until 1794, Story attended the Marblehead Academy, where his teacher was William Harris––who later became the president of Columbia University. After an incident where Story was beaten up badly by Harris, his father withdrew him from the school.
In 1795, Story was enrolled at the Harvard University and graduated in 1798. After that, he studied law in Marblehead under Samuel Sewall and later went to study it under the guidance of Samuel Putnam. 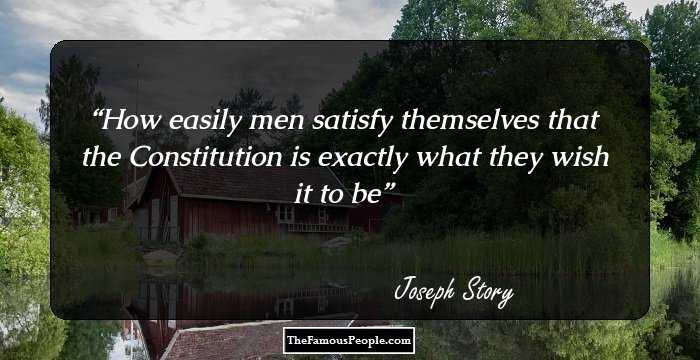 The Hottest Male Celebrities With The Best Abs
Career
After finishing his training as a lawyer, he joined the bar at Salem, Massachusetts, in 1801. He was hired to manage the law of the powerful Republican shipping firm of George Crowninshield & Sons.
In 1805, Story became a member of the Massachusetts House of Representatives and after that he was chosen to represent Essex County in the Congress. He worked to end the ‘Jefferson’ prohibition of maritime business. He remained there till 1808.
After his stint with the Massachusetts House of Representatives, Story went back to his private practice in Salem, Massachusetts, but was again elected to the state House of Representatives and was chosen as Speaker in 1811.
In 1811 itself, Story became the youngest Associate Justice of the Supreme Court of the United States. His nomination came from the then President James Madison and his election was confirmed by the United States Senate.
Since the time of his appointment until 1832, Story made an outstanding contribution to the legal and justice system of the United States. He worked towards equity jurisprudence, denouncing of slave trade, etc.; Story devoted himself to the betterment of the society.
In 1829, he became the first Dane Professor of Law at Harvard University and moved to Cambridge. He was very popular as a teacher and students benefitted from the fact that he was a sitting Supreme Court justice.
Story was also one of the most prominent writers of his time and it is said that by 1844, he was earning $ 10,000 a year from his book royalties. He authored books like, ‘Law of Agency’, etc. 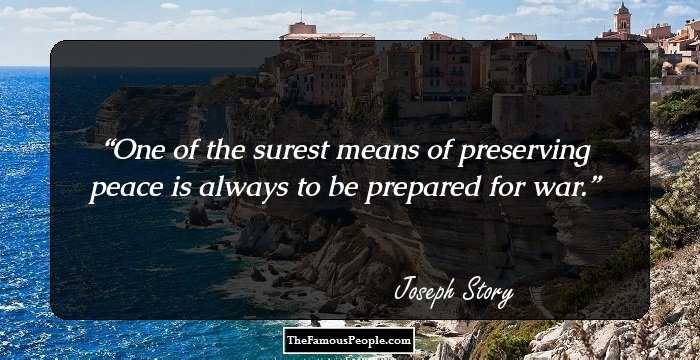 Quotes: War, Peace
Major Works
Story’s most prominent role was that of the Associate Justice of the Supreme Court of the United States. He worked towards denouncing the slave trade, founded the department of admiralty law in federal courts, etc.
Personal Life & Legacy
Story’s first wife, Mary F.L. Oliver, died in 1805, just a few months after their marriage and around the same time when he lost his father.
He married again in 1808 to Sarah Waldo Wetmore. She was the daughter of Judge William Wetmore of Boston. They both had seven children together but only two of them survived until adulthood—Mary and William Wetmore Story.
Story died at home in Cambridge in 1845. He was buried at the Mount Auburn Cemetery, amongst other American pioneers from different fields. His grave is marked by a piece of sepulchral statuary sculpted by his son.
Trivia
This famous jurist used to earn $ 10,000 from his book royalties and only $ 4,500 as an Associate Judge.
He wrote many books in his life, majorly on the topics of law, like, ‘Commentaries on the Law of Bailments (1832)’, ‘The Constitutional Class Book: Being a Brief Exposition of the Constitution of the United States (1834)’, ‘Equity of Pleadings (1838)’, ‘Law of Bills of Exchange (1843)’, etc.
A book dedicated to Story’s life and his principles, ‘Life and Letters of Joseph Story (1851)’, was edited by his writer and sculptor son William Wetmore Story.
Story contributed articles to ‘The Encyclopedia Americana’.
His son became a prominent poet and sculptor of his time.
Recommended Lists:
Lawyers & Judges #578
You May Like

See the events in life of Joseph Story in Chronological Order