Joseph Raymond McCarthy was a Republican U.S. Senator who represented Wisconsin for 10 years from 1947 to 1957. A highly ambitious politician he would go to any length to defame his opponents in order to gain an upper hand. In fact, it was his anti-communist practices and the habit of accusing his opponents of wrongdoings that led to the coining of the term ‘McCarthyism’. He began his anti-communist tactics during the period when the fear of widespread communist subversion was at its peak by fuelling rumours that there were a large number of communist spies inside the U.S. government. He made several accusations on the character of his opponent Robert M. La Follette Jr. while running for the U.S. Senate in 1946, ultimately defeating him. He was a popular speaker and his fame reached phenomenal rise after a Lincoln’s Day speech at a Republican Women’s Club. Buoyed by his rising popularity, he continued to exploit the fear of communism in the minds of people by making false claims against the government without any concrete proof. He was also a homophobic and paralleled his anti-communist activities with an anti-homosexual campaign. His behaviour earned him a lot of criticisms and he was censured for his improper conduct. American Celebrities
American Men
Marquette University
Male Leaders
Scorpio Leaders
Childhood & Early Life
McCarthy was born to Timothy McCarthy and Bridget Tierney as one of their seven children. He was of mixed ancestry.
He dropped out of school when he was 14 to work on his parents’ farm.
He returned to school in 1929 at the age of 20 and graduated from Little Wolf High School.
He went to college to study engineering but soon switched to law. He received his law degree from Marquette University Law School in 1935. 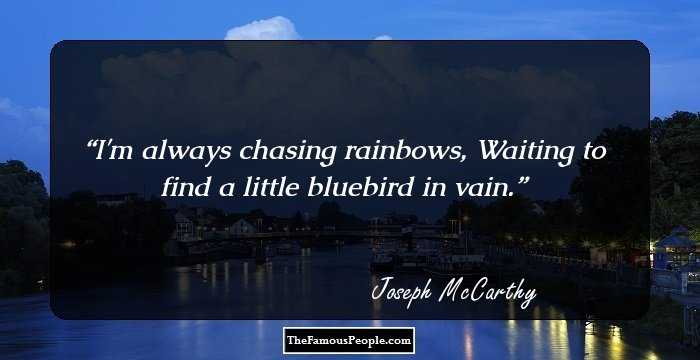 Continue Reading Below
Career
He started working at the law firm of Michael Everlin in 1936. During this time, he also ran as a Democrat for district attorney, albeit, unsuccessfully.
Undaunted by his defeat, he launched a forceful campaign in 1939 to become District Circuit judge in Appleton and he was successful in his endeavor. He also started gambling to earn extra money.
As an attorney, he dispatched many of his cases with great speed and was quick to reduce the already accumulated backlog he had inherited upon taking the office. This created some controversy.
He joined the U.S. Marine Corps in 1942 after U.S. joined the World War II in spite of the fact that his status as a judge exempted him from compulsory duty.
He became a second lieutenant and served as an intelligence briefing officer for a dive bomber squadron. He reached the rank of captain by the time he left the Marine Corps. He made many false claims about his Marine stint to boost his political career.
He campaigned for the Republican Senate while still on active duty in 1944 but was defeated. He resigned from the Marine Corps in 1945 and rejoined his position as a circuit court judge.
An aspiring politician, he launched a persuasive campaign for the 1946 Republican Senate primary nomination challenging the three-time Senator Robert M. La Follette, Jr.
During his campaign, he accused La Follette of not enlisting in the war and of war profiteering which damaged his opponent’s reputation. Ultimately McCarthy won the elections.
During his initial years at the Senate he was a popular speaker who was actively involved in labor-management issues. However, he was also criticized for his quick temper and impatience.
Continue Reading Below
He gave a speech in Wheeling in February 1950 where he displayed a list of 205 Communists in the State Department. This came at a time where fears of communism were running high in the U.S. and his speech became national headlines.
A hearing on McCarthy’s charges was called by the Tydings Committee—a subcommittee of the Senate Foreign Relations Committee--headed by Democrat Millard Tydings.
McCarthy changed his statements regarding the list frequently and at one point stated that Owen Lattimore, a former State Department adviser was a Russian spy. However, he was not able to produce any concrete proofs to support his accusations.
His behaviour invited a lot of publicity and his popularity soared for a while. But he also had his detractors, one of them being the ‘Washington Post’ cartoonist Herbert Block who framed the term ‘McCarthyism’ to denote demagoguery and baseless defamation.
In 1952, McCarthy was reelected to the Senate having defeated Thomas Fairchild in the general elections. He was made chairman of the Senate Permanent Subcommittee on Investigations in 1953. He used this position to investigate communists in the government and appointed other anti-communists in his office.
In 1953, the McCarthy Committee started investigating communist activities in the army and placed accusations on Army dentist Irving Peress and General Ralph Zwicker.
The Army-McCarthy hearings were convened in 1954 to investigate the conflicting accusations between the U.S. Army and McCarthy. The hearings received considerable press coverage and also included live television footage. McCarthy’s reputation was badly damaged as a result.
McCarthy’s tactics made him very unpopular in the U.S Senate and Republican Senator Ralph E. Flanders introduced a resolution in 1954 to censure him. Senator Arthur Vivian Watkins chaired the special committee to evaluate the resolution.
The Watkins Committee recommended censuring McCarthy on two counts and in December 1954 the Senate voted to condemn him by a vote of 67 to 22.
As a result of the censure, his image was badly tarnished and his political career saw a downfall after that. 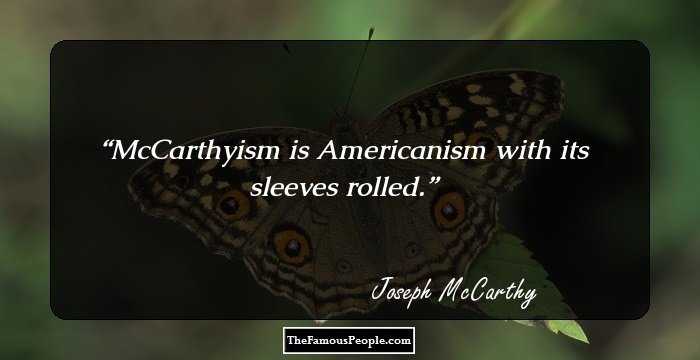 Personal Life & Legacy
He married Jean Kerr in 1953. The couple adopted a daughter in 1957.
His health deteriorated greatly after being censured. His failing health coupled with his alcoholism resulted in his death in 1957.
Trivia
The character of Senator John Iselin in the novel ‘The Manchurian Candidate’ by Richard Condon is based upon this politician.
Actor Peter Boyle portrayed this politician in the Emmy Award winning television movie ‘Tail Gunner Joe’ in 1977. 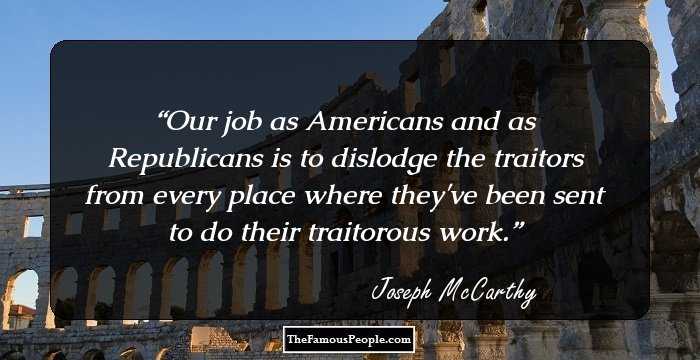 Quotes By Joseph McCarthy | Quote Of The Day | Top 100 Quotes

See the events in life of Joseph McCarthy in Chronological Order