Joseph Heller was an American satirical novelist, short story writer, and playwright, best known as the author of Catch-22, a celebrated antiwar novel. The darkly comic novel, centers on the antihero Yossarian. It is based on the writer’s own experience as a bomber pilot in World War II and takes a satirical look at war, bureaucracy, and the maddening logic or lack thereof. To him the rational response to war was not bravery or heroism, but cowardice. The book received mixed reviews upon publication in 1961, but soared in popularity in the late 1960s and early 1970s as its themes found a receptive audience in the Vietnam War era. He was often compared and grouped with the authors such as Kurt Vonnegut, Thomas Pynchon, and Philip Roth. In the book, Heller wrote. "Orr would be crazy to fly more missions. . . . but if he didn't want to he was sane and had to”. These words typified the phrase Catch-22 which entered the English lexicon and refers to "any absurd arrangement that puts a person in a double bind. Heller wrote five additional novels, including Something Happened, Good As Gold and Closing Time, a sequel to Catch-22, as well as short stories, plays, screenplays, and the memoir, Now and Then. 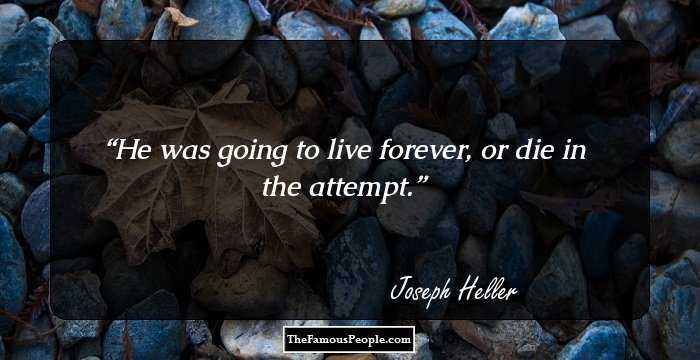 Continue Reading Below
Career
After graduating from Abraham Lincoln High School in 1941, Heller found work as a file clerk for an insurance agency, became a blacksmith's assistant and enrolled in a cadet school.
After graduating from cadet school as a first lieutenant early in 1944, he was assigned to a squadron in Corsica where he initially had no serious complaints about his life in a combat unit.
His thirty-seventh mission, a raid on Avignon, on the Rhone River in southeast France made him realize he was courting death on these flights. The young lieutenant's war was not the same after that.
He completed sixty missions in the Mediterranean and received an Air Medal as well as a Presidential Unit Citation with his honorable discharge. He enrolled at the University of Southern California in 1945.
He transferred to New York University, received his B.A in 1948, an M.A in American Literature from Columbia University and a Fulbright Scholarship to study for a year at Oxford University in England.
Following a short teaching stint at Pennsylvania State University, Heller joined the corporate world as advertising manager at Time magazine. In 1953, he began working on a novel tentatively titled Catch-18.
In 1969, he wrote a play ‘We Bombed in New Haven’. It delivered an anti-war message while discussing the Vietnam War. It was produced by the Repertory Company of the Yale Drama School.
’Something Happened’, his second novel was published in 1974. Its main character and narrator is Bob Slocum, a businessman who engages in a stream of consciousness narrative about himself and his own psyche.
’Good as Gold’ , his 1979 novel has Bruce Gold, a Jewish, middle-aged university English professor as the main protagonist who is offered the post of the country's first ever Jewish Secretary of State.
Continue Reading Below
’Picture This’, a 1988 novel, makes an eclectic historical journey across three periods of history, all connected by a single painting of Rembrandt titled, Aristotle Contemplating a Bust of Homer.
‘Closing Time’, a 1994 novel written by him as a sequel to Catch-22, revisits some characters of the original, including Yossarian, and Milo Minderbinder while Joey, a new character and the author shared similarities.
He penned his memoir ‘Now and Then’ in 1998. Heller describes growing up on Coney Island, his mother and half-siblings in a fundamentally safe and fun neighborhood and provides interesting details from his life.
In 1998, the writer clarified that he did not plagiarize Catch-22 despite the amazing similarities in Catch-22 and a novel written by Louis Falstein titled, ‘The Sky is a Lonely Place in Britain’.
‘Portrait of an Artist, as an Old Man’, his final novel published posthumously in 2000, depicts an elderly author as he tries to write a novel that emulates the success of his previous work. 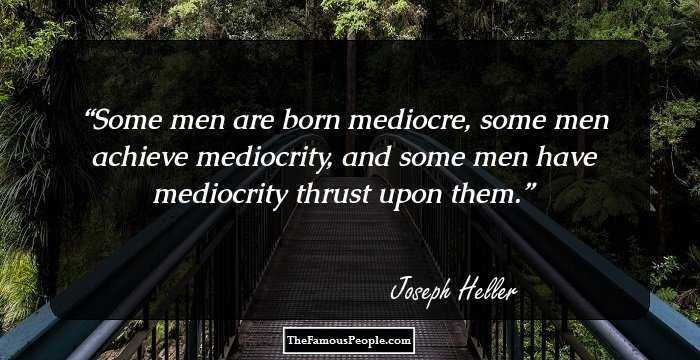 Major Works
Heller’ first novel ‘Catch-22’, published in 1961, describes Army Air Corps Captain John Yossarian’ numerous unsuccessful strategies to avoid combat missions. Now considered a classic, it sold 10 million copies in the United States,
‘No Laughing Matter’ was co-authored by Heller and Speed Vogel. Written during Heller's struggle with a debilitating disease called Guillain-Barré syndrome, the book is full of humor and is devoid of self-pity.
Personal Life & Legacy
Heller married Shirley Held, with whom he had two children, Erica Jill and Theodore Michael.
In 1981, he discovered that he had Guillain-Barré syndrome. Already divorced from Shirley, he married his nurse, Valerie Humphries in 1987.
He died of a heart attack on December 12, 1999 at his home in Long Island. Upon hearing of Heller's death, his friend Kurt Vonnegut said, "Oh, God, how terrible. This is a calamity for American literature”. 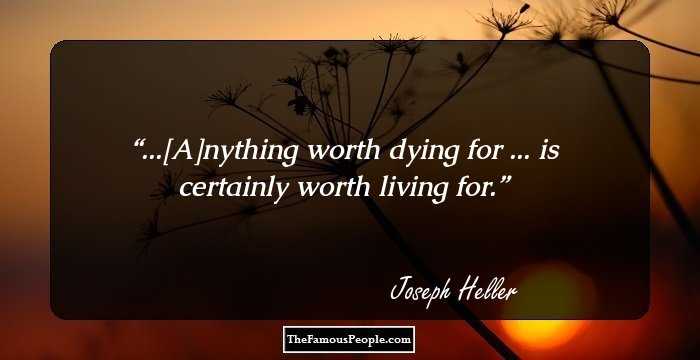 Quotes: Living
Trivia
This famous writer once declared, “Some men are born mediocre, some men achieve mediocrity, and some men have mediocrity thrust upon them.”

Quotes By Joseph Heller | Quote Of The Day | Top 100 Quotes

See the events in life of Joseph Heller in Chronological Order