Jonathan Howsmon Davis, popularly known as ‘JD’ or ‘JDevil’, is an American musician and lead vocalist for the nu metal band ‘Korn’. His music is popular for being dark, addressing issues of abuse and emotional trauma, which is inspired by the terrible and abusive childhood that Davis had. He went through emotional, physical, mental and sexual atrocities when he was growing up—his parents got divorced when he was young, his stepmother tortured him, his family friend used to sexually abuse him and his high school peers outrageously bullied him for wearing different clothes, listening to different music so much so that they used to physically beat him. All of these scaring experiences he included in his music - making music a way to vent out his suppressed emotions. He was into DJing since he was in school, which only got developed into a passionate love for making music and he combined together a band called ‘Korn’ through which he became commercially popular. He is famous for his alternate image, his affliction with the dark side of life and his ability to express pain through music. He earned two 'Grammy Awards' out of eight nominations. Taylor Swift
Lyricists & Songwriters #522
Musicians #888
Singers #1038
DID WE MISS SOMEONE?
CLICK HERE AND TELL US
WE'LL MAKE SURE
THEY'RE HERE A.S.A.P
Quick Facts

Jonathan Davis was born on January 18, 1971, in Bakersfield, California, to Rick Davis and Holly Chavez. His father was a keyboardist for Buck Owens and Frank Zappa and his mother was an actress and a professional dancer.

When Davis was only 3 years old, his parents separated and he went with his father. As a child he suffered from acute asthma.

Davis had a terrible childhood as he was abused sexually and emotionally as a child. He particularly had a horrible relationship with his stepmother who used to physically torture him, a reason why his father later divorced her.
He attended the Highland High School and graduated from there in 1989. He also went to the San Francisco School of Mortuary Science. Because he was a bit different than others, Davis was always a victim of bullying at school. 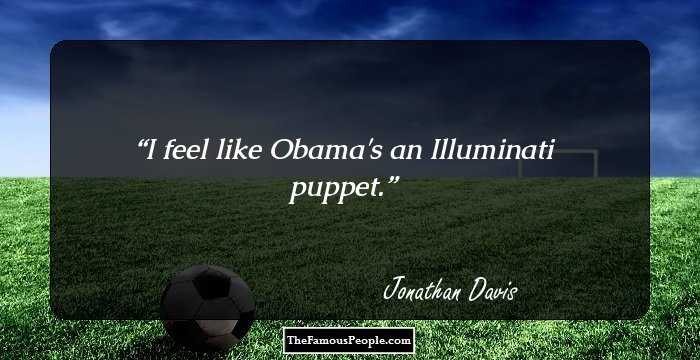 Who Is The Most Popular BTS Member?
Career
From 1987, Davis started to DJ while he was still in the high school under his alter-ego ‘JDevil’. He often did DJing for his high school parties and his favorite genres were ‘New York Freestyle’, ‘Miami bass’, ‘Goth’, etc.
Jeff Creath, a producer and owner of Underground Chicken Sounds recording studio, allowed Davis to live in his garage and within sometime the band ‘Korn’ developed. They began playing gigs and got noticed while performing at Huntington Beach in 1993.

His first album with his band ‘Korn’ was released in 1994, titled ‘Korn’ under Immortal/Epic Records. The theme of the album was something close to Davis’ heart—child abuse and drugs. It peaked at seventy-two on the Billboard 200.

Korn’s fifth studio album ‘Untouchables’ released in 2002, and became an instant hit with the metal fans, which helped it in getting certified platinum. Apart from selling 5 million copies worldwide, its single ‘Here to Stay’ won a Grammy.

In 2003, ‘Take a Look in the Mirror’ was released. The album received mixed critical reviews but ranked at No. 284 on Rock Hard magazine’s ‘The 500 Greatest Rock & Metal Albums of All Time’.

‘See You on the Other Side’ was released in 2005, under Virgin Records. It went platinum but the longtime guitarist of the band was not in it. Korn took the help of ‘The Matrix’ to give itself a more mainstream popularity.

Band’s 2007 released album was not given a title intentionally as Davis wanted his fans to call it whatever they wanted to call it. Certainly the gimmick worked out for them and the album was certified gold.

The more recent albums by Korn are: ‘Korn III: Remember Who You Are (2010)’, ‘The Path of Totality (2011)’ and ‘The Paradigm Shift (2013), which received positive critical reviews and their former guitarist Brian ‘Head’ Welch returned for this album. 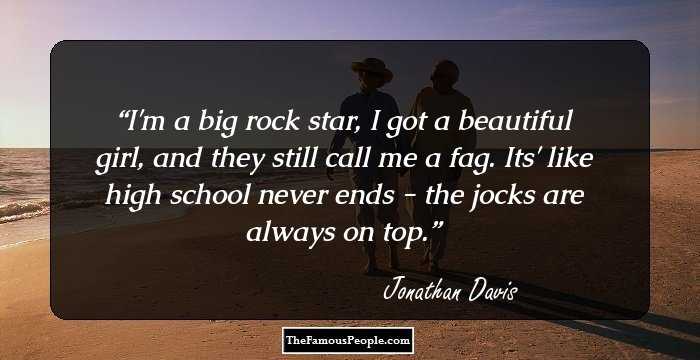 Quotes: Beautiful
Personal Life & Legacy
Davis had a very troubled childhood as he faced the atrocity of his parents’ divorce, physical torture by his stepmother, sexual abuse by a family friend and incessant bullying at school. All of these experiences he uses in his music.

He was married to Renee Perez from 1998-2001 and has a son with her, Nathan. He was married for the second time to a former pornographic actress Deven Davis in 2004. They have two sons together - Pirate and Zeppelin. Deven Davis dies of combined drug intoxication from heroin on August 17, 2018.

In 2006, Davis developed idiopathic thrombocytopenic purpura (ITP), which is a rare bleeding disorder. He was bedridden for days because of this disease and now takes medication to keep it in control.
Trivia
Davis has done small cameos in movies and television series like: ‘Queen of the Damned’, ‘Seeing Other People’, ‘The Still Life’, ‘Sin-Jin Smyth’, ‘Monk’, ‘The Man Show’, ‘South Park’, etc.
Davis’ stepmother used to make him drink a tea mixed with Thai hot oil and jalapeno juice during his illness, to abuse him.
He was bullied at high school for wearing eyeliner, long clothes and always listening to new wave music. He was also called homophobic names. 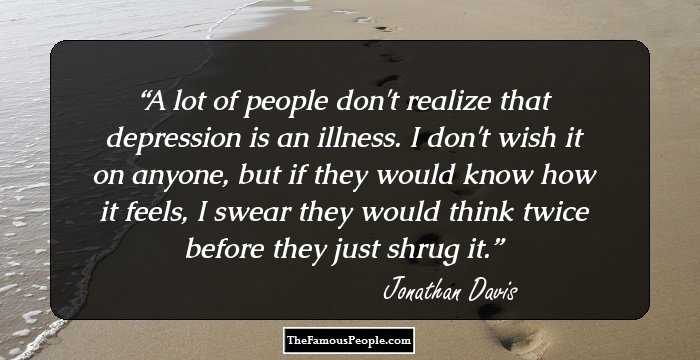 Quotes By Jonathan Davis | Quote Of The Day | Top 100 Quotes

See the events in life of Jonathan Davis in Chronological Order