John Ritter was an American actor and comedian. He was the son of renowned country music singer and actor Tex Ritter and his wife Dorothy Fay who was also an actress. John was the father of actors Jason Ritter and Tyler Ritter. He was best known for playing the character of ‘Jack Tripper’ in ABC sitcom ‘Three’s Company.’ He also won the ‘Golden Globe Award’ and ‘Emmy Award’ in 1984 for his performance in the sitcom. John nurtured his acting skills since his college days where he majored in theatre arts. Prior to ‘Three’s Company,’ he made appearances in series like ‘The Mary Tyler Moore Show’ (1975), ‘The Waltons’ (1972-1976), ‘Hawaii Five-O’ (1971), and ‘M.A.S.H.’ (1973). He then formed his own production company in 1984. He acted in numerous films and television shows, including ‘Problem Child’ (1990) and ‘Bad Santa’ (2003). He was nominated four times for ‘Daytime Emmy Award’ for his work in the animated children's television series ‘Clifford the Big Red Dog.’ He was called the "greatest physical comedian on the planet" by famous American comedic actor Don Knotts. John Ritter died from an aortic dissection in 2003, soon after the production of an episode for the second season of ‘8 Simple Rules.’ Cause of Death: Aortic Dissection

John Ritter was born Jonathan Southworth Ritter on September 17, 1948, in Burbank, California, USA, to Tex Ritter and Dorothy Fay. Both his parents were actors, so he grew up amidst showbiz.

He received his education from ‘Hollywood High School’ and was a student body president at the school. Later, he enrolled at the ‘University of Southern California,’ majoring in psychology and minoring in architecture. Later on, he changed his major to theatre arts and graduated in 1971.

He first appeared in TV as a contestant on ‘The Dating Game’ (1967). Soon after, he joined an acting class. While still in college (1968 – 1969), he traveled to Holland, Scotland, England, and Germany to act in plays. 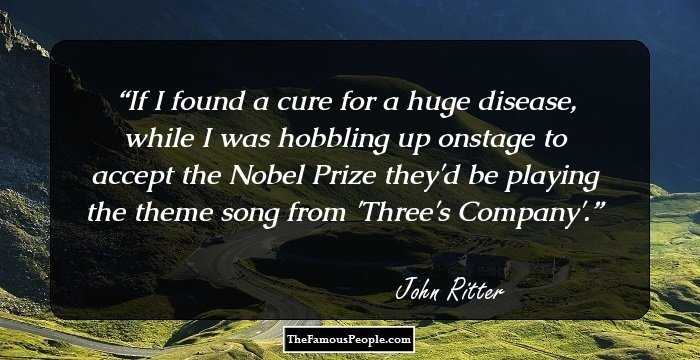 Continue Reading Below
Career
After graduation, he debuted on TV as a campus rebel in ‘Dan August’ (1970). His debut film was ‘The Barefoot Executive’ (1971).

He appeared as ‘Reverend Matthew Fordwick’ in 18 episodes of ‘The Waltons’ (October 1972 - December 1976). Meanwhile, he also made guest appearances on other television series.

Next, he acted in ‘Hooperman’ (1987–1989) as ‘Detective Harry.’ The role won him nominations for both ‘Emmy’ and ‘Golden Globe Awards.’ He also won a ‘People's Choice Award’ for the role.

From 2000 to 2003, he voiced the title character in ‘Clifford the Big Red Dog.’ He received four ‘Emmy’ nominations for his work. During this period, he also acted in the series ‘8 Simple Rules.’ 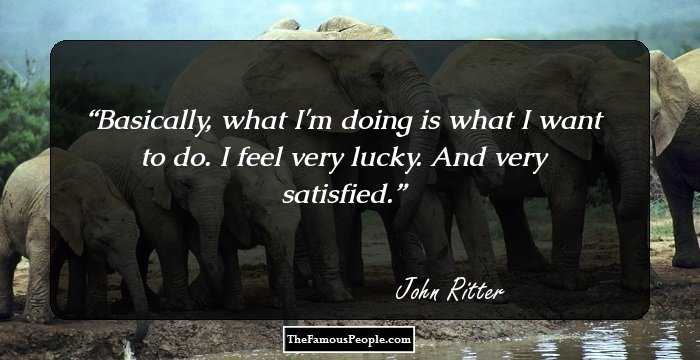 In the sitcom ‘Three's Company,’ he played the character of ‘Jack Tripper,’ a chef who shares a room with two beautiful ladies and pretends to be gay to pacify the conservative landlords.

In ‘Hooperman’ (1987-89), he played ‘Detective Harry Hooperman’ who owns an apartment building and employs ‘Susan Smith’ to manage it. As the relationship evolves, the protagonist must balance love and work.

He was awarded a star on the ‘Hollywood Walk of Fame’ at 6631 Hollywood Boulevard in 1983.

�In 1984, John Ritter won the ‘Emmy Award’ under the ‘Outstanding Lead Actor in a Comedy Series’ category for the sitcom ‘Three’s Company.’ The same year, he also won the ‘Golden Globe Award’ for ‘Best Actor in a Musical/Comedy’ for the same series.

�In 1988, he won ‘People’s Choice Award’ under ‘Favorite Male Performer in a New TV Program’ category for ‘Hooperman.’ 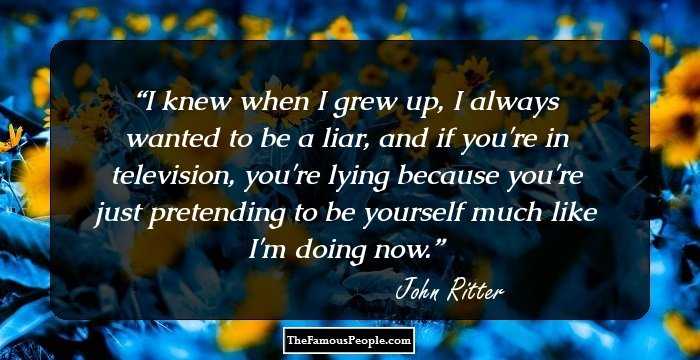 Quotes: You, Yourself
Personal Life & Legacy

John Ritter married actress Nancy Morgan in 1977. Together, they had three children: Jason, Carly, and Tyler. The couple divorced in 1996.

He married actress Amy Yasbeck in 1999. Together, they had a daughter named Stella.

On September 11, 2003, he complained of chest pain while rehearsing for ‘8 Simple Rules.’ Doctors misdiagnosed and treated him for heart attack and his condition worsened. They then diagnosed him with an aortic dissection. He died during the surgery.

He was born with a defect in his right eye, a condition known as coloboma.

He died on his youngest daughter Stella’s fifth birthday.

His final film ‘Bad Santa’ (2003) was dedicated to him posthumously.

Quotes By John Ritter | Quote Of The Day | Top 100 Quotes

See the events in life of John Ritter in Chronological Order