John William Ferrell, popularly known as Will, is an American actor, comedian, producer and writer. He started performing comedy skits in his school. However, he did not want to join the show business as his father, who was a musician, never got his paychecks on time. After his graduation, he took up odd jobs, but ultimately moved to Los Angeles and joined the comedy group ‘Groundlings’ on his mother’s advice. His big breakthrough came when he was spotted by ‘Saturday Night Live’ (SNL) producer Lorne Michaels. He successfully hosted the show for seven years. In a poll taken in 2014, Ferrell was voted the best ‘Saturday Night Live’ cast member of all time. Although he appeared in a number of films while being part of the show, his film career actually took off after he left SNL. From 2003 onwards, he began starring in many popular films that went on to become commercial as well as critical hits. Around the same time, he started writing screenplays and opened a production company called ‘Gary Sanchez Productions’ along with Adam McKay. He is also a good baseball player and a philanthropist. He has donated considerably to different charities that involve cancer survivors. Ryan Reynolds
16th July In History
DID WE MISS SOMEONE?
CLICK HERE AND TELL US
WE'LL MAKE SURE
THEY'RE HERE A.S.A.P
Quick Facts

American People
Actors
Comedians
American Men
California Actors
Childhood & Early Life
John William Ferrell was born on July 16, 1967, in Irvine, California, USA. His father Roy Lee Ferrell Junior was a keyboard player with ‘The Righteous Brothers’ and his mother Betty Kay (née Overman) was a teacher. Will has a younger brother named Patrick.
When Will was eight years old, his parents divorced. However, both of them took good care of their children. Hence, Will did not have any hard feeling about it. Instead, he relished the thought that they would be able to celebrate Christmas twice.
He began his education at ‘Culverdale Elementary School’ in Irvine. After graduating from there, he first joined ‘Rancho San Joaquin Middle School’ and then studied at the ‘University High School.’ He was a member of his high school football team and mostly played as a kicker.
An introvert by nature, Will realized that he had the capability to make people laugh when he was in his third grade. Soon, he was exploring ways to be funny as making people laugh became a good diversion in an otherwise monotonous life.
While in ninth grade, Will, along with one of his friends, began to perform comedy skits which they themselves wrote. He also performed such skits in the school’s talent shows and became popular among his classmates.
After graduating from high school, Will enrolled at the ‘University of Southern California.’ In 1990, he graduated with a BA degree in Sports Broadcasting. He then earned an internship at the NBC television World. Soon enough, he realized that he did not want to be a sports broadcaster and began looking for other jobs. 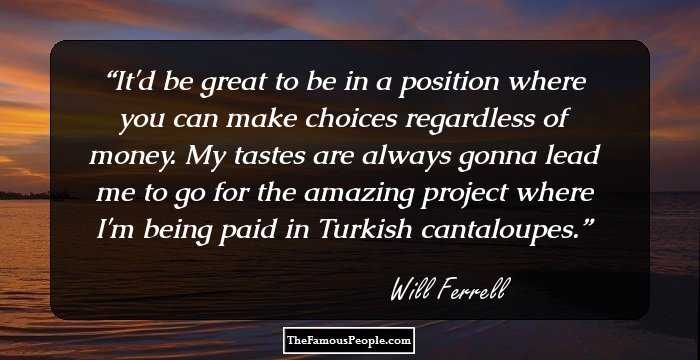 Quotes: You, Me, Money
Continue Reading Below
Career
After trying his hand at several odd jobs, Will moved to Los Angeles. He tried to establish himself as a stand-up comedian, but failed. To hone his skills, he enrolled at an advance comedy class where he learnt to improvise and impersonate.
He then auditioned for the ‘Groundlings,’ an improvisational and sketch comedy troupe, and got through. Here, he got opportunities to hone his skills. Soon, he began to receive small roles in TV sitcoms, such as ‘Grace Under Fire’ and ‘Living Single.’ In addition, he also took part in low-budget films like ‘A Bucket of Blood.’
In 1994, he became a prominent member of ‘The Groundlings.’ Around the same time, ‘Saturday Night Live’ on NBC had started declining in popularity and producer Lorne Michaels was looking for new cast. Ferrell caught his attention.
Will Ferrell joined ‘Saturday Night Live’ in 1995. He left the show in 2002 after a successful seven-year run. During this period, he impersonated well-known people, including President George Bush and became popular for such acts. He returned to SNL as guest host to host special shows.
While working on ‘Saturday Night Live,’ Ferrell appeared in many films. Some of those are ‘Austin Powers: International Man of Mystery’ (1997), ‘A Night at the Roxbury’ (1998), ‘Superstar’ (1999), ‘Dick’ (1999), ‘Austin Powers: The Spy Who Shagged Me’ (1999), ‘The Ladies Man’ (2000), ‘Drowning Mona’ (2000), ‘Jay and Silent Bob Strike Back’ (2001), and ‘Zoolander’ (2001).
After leaving SNL, he began to concentrate on his film career. He landed his first starring role in the comedy film ‘Old School’ (2003). The film was about three men who wanted to relive their college days by organizing a fraternity. In this film, Ferrell appeared as ‘Frank “the Tank” Ricard’ and stole the show.
In the same year, he starred in ‘Elf.’ In this film, Ferrell appeared as ‘Buddy Hobbs.’ The film was critically appreciated and grossed $220.9 million worldwide.
In 2004, Ferrell starred in movies like ‘Anchorman: The Legend of Ron Burgundy’ and ‘Wake Up, Ron Burgundy: The Lost Movie.’ He also appeared in a crime action comedy film titled ‘Starsky & Hutch’ and a documentary called ‘Oh, What a Lovely Tea Party.’
In 2005, Will Ferrell starred in three films: ‘Bewitched,’ ‘Kicking and Screaming,’ and ‘The Producers.’ In addition, he had cameo appearances in ‘Winter Passing,’ ‘Wedding Crashers,’ and ‘The Wendell Baker Story.’
Continue Reading Below
2006 was another important year for Ferrell. This year, he had three films hitting the screens and each doing well at the box office. These films were ‘Stranger than Fiction,’ ‘Talladega Nights: The Ballad of Ricky Bobby,’ and ‘Curious George.’ Sometime now, Ferrell and Adam McKay established ‘Gary Sanchez Productions.’ The company was named after ‘Gary Sanchez,’ a fictional Paraguayan financier.
In April 2007, Ferrell launched ‘Funny or Die,’ a comedy website. He also starred in ‘Landlord,’ a short comedy film released on this site. Since then, the video has been viewed by more than 80 million viewers.
‘The Landlord’ was followed by another video called ‘Good Cop, Baby Cop.’ In 2007, he also starred in ‘Blades of Glory.’ This film, which was directed by Josh Gordon and Will Speck, was well received by the critics as well as the audience.
2008 was an eventful year in the life of Will Ferrell. Apart from starring in ‘Semi Pro,’ he also wrote the screenplay of ‘The Step Brothers’ along with Adam McKay. He was also one of the actors of this film. In September, Ferrell released another video titled ‘Will Ferrell Answers Internet Questions.’
In 2009, Will Ferrell was cast to play ‘Dr. Rick Marshall’ in ‘Land of the Lost.’ He also appeared in an un-credited role in ‘The Goods: Live Hard, Sell Hard.’ In addition, he took part in ‘You’re Welcome America. A Final Night with George W Bush’ which is a comedic Broadway play. Ferrell enacted the role of George Bush in this play. It was broadcast live on HBO.
Ferrell also started co-producing ‘Eastbound & Down,’ an American sports comedy television series, from February 2009. It was broadcast on HBO. It ended on November 17, 2013.
In 2010, Ferrell appeared in ‘The Other Guys’ and ‘Everything Must Go.’ He also lent his voice to ‘Megamind,’ a 2010 American 3D computer-animated superhero comedy film.
He then acted in a number of films, such as ‘Casa de Mi Padre’ (2012), ‘Tim and Eric's Billion Dollar Movie’ (2012), ‘The Campaign’ (2012), ‘Anchorman 2: The Legend Continues’ (2013), ‘Get Hard’ (2015), ‘A Deadly Adoption’ (2015), ‘Daddy's Home’ (2015), etc.
After appearing in films like ‘Zoolander 2’ (2016) and ‘The House’ (2017), he next appeared in the Christmas comedy sequel ‘Daddy’s Home 2’ (2017) alongside an ensemble cast of Mark Wahlberg, Mel Gibson, and John Cena.
Continue Reading Below
In 2019, he was part of the hit computer animated comedy film ‘The Lego Movie 2: The Second Part’ wherein he voiced various characters. The same year, he was also part of other movies, such as ‘Drunk Parents,’ ‘Between Two Ferns: The Movie,’ and ‘Zeroville.’
In 2020, he played ‘Pete Staunton’ in a black comedy drama film titled ‘Downhill.’ The film, which was directed by Nat Faxon and Jim Rash, premiered on January 26, 2020, at the ‘Sundance Film Festival.’ The same year, he made a cameo appearance in the reality comedy film ‘Impractical Jokers: The Movie.’ 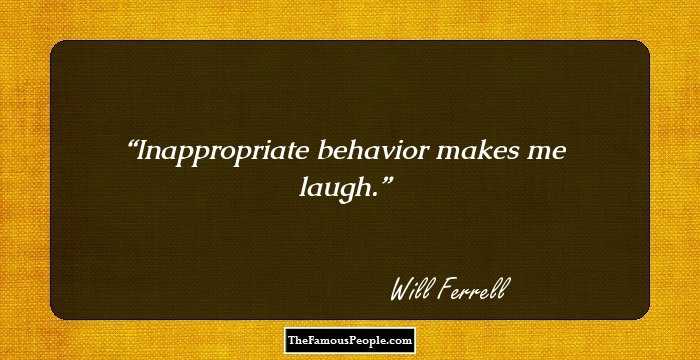 Quotes: Me
Major Works
His participation in ‘Saturday Night Live’ was his first major work. He hosted the show for seven long years and then returned to make guest appearances on three occasions.
‘Old School,’ released in 2003, was another major work in his formative years. The film grossed $75,585,093 in North America and $11,470,256 in international markets; total worldwide gross was $87,055,349. Ferrell received an ‘MTV Movie Award’ nomination for ‘Best Comedic Performance.’
‘Stranger Than Fiction’ was one of his major comedy dramas that was received well by the critics as well as the audience. In this, Ferrell was able to display his acting talent to the fullest.
‘Talladega Nights: The Ballad of Ricky Bobby’ is another important work in his career. It was his highest-grossing live-action opening at $47 million.
Philanthropic Works
Will Ferrell is the brains behind ‘Super Sexy Hot Tan Lotion.’ It is available on ‘Amazon’ at a very low price and the entire proceeds from the sale go to ‘Cancer for College’s College Willpower Scholarship Fund.’ The grant provides scholarships to cancer survivors who struggle to afford college fees because of high medical bills. 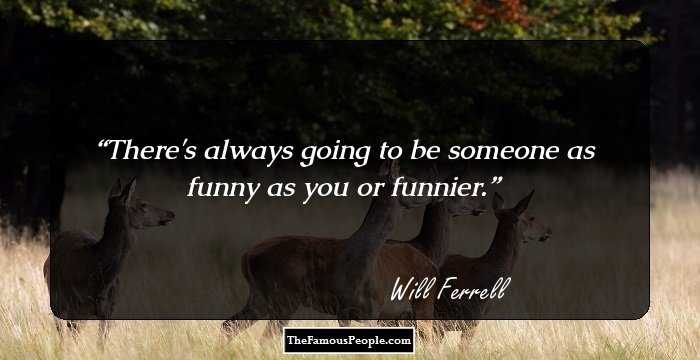 Quotes By Will Ferrell | Quote Of The Day | Top 100 Quotes

See the events in life of Will Ferrell in Chronological Order