John Wilkes Booth was a well-known actor who shot to the heights of notoriety by assassinating the President Abraham Lincoln in Washington, D.C. He was a fanatic supporter of the Confederates and was bitterly opposed to Lincoln. The assassination of Lincoln was a part of a grand conspiracy he had hatched with a group of co-conspirators—a well-planned plot had been hatched for killing the President Lincoln, Vice President Andrew Johnson, and Secretary of State William H. Seward. Only Booth’s attempt was successful. A strikingly handsome man, Booth was a well-known stage actor who hailed from the famous 19th century Booth theatrical family. As a young boy he was athletic and popular though he did not like school. He developed an interest in theatre and made his stage debut when he was 17. With his good looks and talent he became a very popular actor. However, there was another side to his charming actor’s persona — he had a deep rooted hatred for President Lincoln and his policies. After an initial plan of kidnapping the President was foiled, an embittered Booth decided to assassinate the president. He carried out his plan by shooting the President when Lincoln was watching the play ‘Our American Cousin’ at Ford's Theatre. He evaded immediate capture though he was shot dead a few days later. Joseph James De...
DID WE MISS SOMEONE?
CLICK HERE AND TELL US
WE'LL MAKE SURE
THEY'RE HERE A.S.A.P
Quick Facts

American People
Male Criminals
Male Murderers
Taurus Criminals
American Murderers
Childhood & Early Life
He was the ninth of ten children born to the stage actor Junius Brutus Booth and his mistress Mary Ann Holmes. He was named after the radical politician John Wilkes. His parents got married after his father divorced his first wife.
He was an athletic and popular boy though he did not like school. He entered St. Timothy’s Hall, a military academy, where students were made to wear uniforms and were subjected to strict discipline. He left the academy within a year. 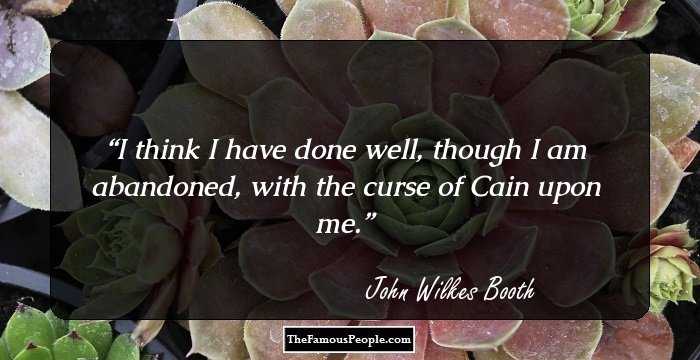 Quotes: Me, Think, I
Continue Reading Below
You May Like

The Hottest Male Celebrities With The Best Abs
Later Years
He aspired to become an actor like his father and made his stage debut in a production of Shakespeare’s ‘Richard III’ in 1855 when he was 17 years old. He was very handsome and exuded a certain charisma which made him a very popular actor.
He was highly energetic and very passionate in his acting. He spent the early 1860s on a national tour as a leading actor. A family friend, John T. Ford opened a 1,500 seat Ford’s Theatre in 1863 and Booth was one of the first leading men to appear there.
The Civil War began on April 12, 1861 and Booth took sides with the Confederate States of America. He was a strong supporter of slavery and vehemently opposed abolitionism. He was also against black suffrage.
He developed a deep hatred for Abraham Lincoln who had become the President in 1860. He hoped that the Confederacy would win in the next presidential elections but as the 1864 elections drew near he realized that Lincoln might win the re-election.
Lincoln’s re-election in 1864 almost drove Booth crazy. He plotted an elaborate plan to kidnap the President along with some other co-conspirators.
In March 1865, he got the information that Lincoln would be attending the play ‘Still Waters Run Deep’ at a hospital. Booth and his men assembled themselves on the route to the hospital to kidnap the President when he traveled through. However, the President changed his plans at the last minute.
Booth’s hatred for the President primarily rooted from the fact that Lincoln was an abolitionist who believed in black suffrage. The president’s views enraged Booth so much that he decided to assassinate the President instead of kidnapping him.
On April 14, 1865, he received the news that the President along with his wife would be attending the play ‘Our American Cousin’ at Ford’s theater in the evening. He set about making plans to kill the President.
Booth informed his accomplices Powell, Herold and Atzerodt about his plans and assigned Powell and Atzerodt to assassinate Secretary of State William H. Seward and Vice President Andrew Johnson respectively.
As a famous actor, he easily gained entry into the theatre and at 10 p.m. in the evening he fatally shot Lincoln as he was watching the play. After the assassination he leapt on to the stage and declared “Sic semper tyrannis" that is Latin for "Thus always to tyrants”. He then escaped using a getaway horse.
Major Crime
Booth was a famous actor who became notorious for assassinating the President Lincoln. He always harbored a deep hatred for Lincoln and had plotted an unsuccessful attempt at kidnapping him. He assassinated the President by shooting him fatally as Lincoln was watching a play.
Personal Life
He fell in love with Lucy Lambert Hale, the daughter of U.S. senator John P. Hale in 1865. He persistently courted the beautiful lady and became engaged to her secretly. Their engagement came to an end when he killed the President.
After killing the President he escaped along with his co-conspirators. After crossing the Potomac River they took refuge at the Garret farm in Virginia. The investigators caught up with them by 26 April 1865. They set fire to the barn where he was hiding and shot Booth when he refused to surrender. He died of his injuries hours later.
Trivia
When this assassin was a young boy a gypsy fortuneteller has predicted that he would have a grand but short life and was doomed to die young.
You May Like