John Samuels Waters Jr. is a director of quirky and unconventional movies. His style and creativity are worlds apart from the mainstream cinema and has every now and then tested the boundaries of propriety. He has given to the world some great movies like ‘Pink Flamingos’, ‘Hairspray’, ‘Cry Baby’, ‘Pecker’, etc. His movies have been characterized by a sense of exaggeration and over the top unrealistic portrayal of dispositions. He was never a normal child, always had a flair for the dark and grotesque. Waters started to portray violence in his creativity from his teen years when he filmed and screened his films in Baltimore to an underground audience. He is not just a director of excellent and peculiar taste but has also done some cameos in the movies and hosted television shows. Waters is also an avid collector of books. Some of his movies have been turned into hit Broadway musicals like: ‘Hairspray’ and ‘Cry Baby’ and he was honored at the Provincetown International Film Festival with Filmmaker on the Edge Award in 1999. Waters has dedicated his time and life to making movies, exhibiting his artwork and installations and materializing his bizarre concepts like hitchhiking to journey across United States. Nicknamed as ‘Pope of Trash’ and ‘The Sultan of Sleaze’ for his open quirkiness, Waters has authored books like: ‘Shock Value: A Tasteful Book about Bad Taste’, ‘Crackpot: The Obsessions of John Waters’ and ‘Change of Life’. American People
Directors
Screenwriters
American Men
Maryland Actors
Childhood & Early Life
John Waters was born on 22 April 1946 in Baltimore, Maryland to Patricia Ann and John Samuel Waters. His father was into manufacturing of fire-protection equipments and theirs was an upper-middle class family. He grew up in Lutherville, a suburban area of Baltimore. The family belonged to Roman Catholic belief. He went to Calvert Hall College High School and graduated from Boy’s Latin School, Maryland. From the very young age Waters was drawn towards movies.
When he was seven years old, he was enthused by the movie called ‘Lili’ and it inspired a love for puppets in his heart. He was known to be violent and dark from the very childhood. He used to perform violent adaptations of ‘Punch and Judy’ at children’s birthday parties. When he was a teenager, his grandmother gifted him his very first 8mm film camera. He was into watching movies appropriate for his own age; he used to watch adult only films at the local drive-ins through his binoculars.
Waters’ friends, just like him, had a taste for counter culture art. They were anti mainstream culture and in 1960s together they started to shoot silent 8mm and 16mm films in Baltimore. These movies were secretly screened in Baltimore church to an underground audience. Audiences were drawn through secret word of mouth and leaflet campaigns on the street. Steadily his filmmaking technique started growing more mature and polished and the subject of his movies was becoming more and more bizarre. This attracted more young and creative, likeminded audience to his underground screenings. 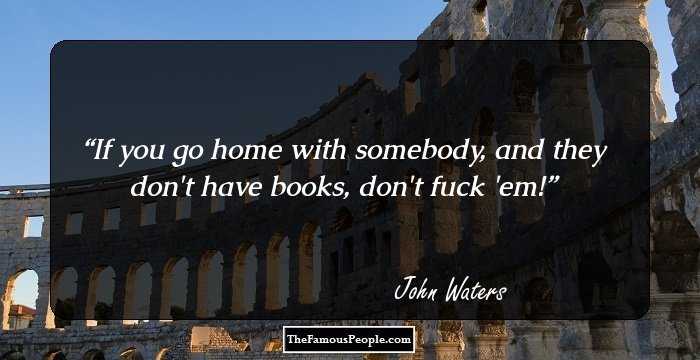 Quotes: You, Home, Books
Continue Reading Below
You May Like

Who Is The Most Popular BTS Member?
Career
The first ever proper short film that Waters made is called ‘Hag in a Black Leather Jacket’ and it was screened only once in a coffee shop known as ‘Beatnik Coffee House’ but in his later years he exhibited the movie for a travelling photography exhibition. In 1966, Waters went to the New York University but his heart was not into it. According to him the kind of art and creativity he was into was completely opposite to what they preferred at the NYU. Not many days after joining the university, Waters and his friends were expelled as they were caught smoking marijuana on the NYU grounds.
Getting thrown out of NYU compelled Waters to come back to Baltimore and there he started filming short films like: ‘Roman Candles’ and ‘Eat Your Makeup’. Later he began to make films of longer length like: ‘Mondo Trasho’ and ‘Multiple Maniacs’. His childhood friend Glenn Milstead, also known as Divine, became the chief actor in his experimental movies. All of his early movies included local actors from Baltimore and were shot in Baltimore itself. His conglomerate of actors included, Mink Stole, Cookie Mueller, Edith Massey, David Lochary, Mary Vivian Pearce, etc.
Waters first formal success came with ‘Pink Flamingos’ in 1973. The movie is said to have stretched the peripheries of propriety and had extreme characterization. It contained inflated situations, very far off reality and the dialogues of the movie were also hyperbolic. This was the basic trend of all of his movies. There is a particular climax scene at the end of the movie which is infamous for its main lead, Divine, eating dog feces.
In 1981, Waters made a move from bizarre creativity to more of controlled and mainstream cinema. His first mainstream film called ‘Polyester’ was released in the same year, which starred Divine and Tab Hunter in it. After ‘Polyester’, Waters came up with many mainstream movies like: ‘Hairspray (1988)’, ‘Cry-Baby (1990)’, ‘Serial Mom (1994)’, ‘Pecker (1998)’ and ‘Cecil B. Demented (2000)’. Although these movies complied with the basics of the commercial cinema, they still had Waters’ patent creative strangeness to them.
In 2004, Waters released his conflict-ridden creative work called ‘A Dirty Shame’, starring Johnny Knoxville. In the same year, he appeared in a cameo in ‘Jackass Number Two’ and in ‘Seed of Chucky’ in which his character was called ‘Pete Peters’. In 2007, he hosted an American dramatization of marriages that ended in murder on the Court TV, called ‘Til Death Do Us Part’.
In 2008, he decided to make a children’s movie called the ‘Fruitcake’ and planned on starring Johnny Knoxville along with Parker Posey in it. He had to put it on hold for he did not have enough funds to make it as it was estimated to cost 5 million American dollars. Therefore, he sold the idea to an independent film making company and made money out of it. But the film could never materialize as the company got shut down.
In 2009, Waters exhibited his photo-based artwork and installations called ‘Rear Projection’ at the Marianne Boesky Gallery, New York and also at the Gagosian Gallery in LA. He has been doing such fine art work since 90s and exhibits his work internationally. His famous comical art work called ‘Rush’ was exhibited in 2009.
Waters has been working on one of his quirky projects and he completed it in the recent years. He was on a hitchhiking journey through United States from Baltimore to San Francisco. He has planned to use his experience as material for his new book. The working title of this book is ‘Carsick’. On his hitchhiking journey he was picked up by famous people like Maryland Councilman Brett Bidle, indie rock, Here We Go Magic, etc. 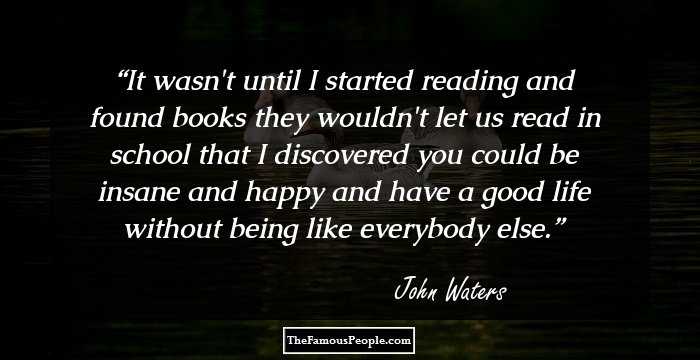 Quotes: You, Life, Like, Books, I
Continue Reading Below
Personal Life & Legacy
Waters is quite open about his sexuality. He is a homosexual and has never shied away from publically accepting it. Although, not much is known about his partners but he is quite openly gay. He is also an active supporter of the gay rights and gay pride.
Trivia
Waters has always been attracted to the grotesque and dark. The earliest dark memories that he has got is of a blood stained car seat that he saw in a yard sale and contemplated about horrid car accidents.
He says that he thinks dark but he does not live it. He claims himself and his life to be very different from his cinema.
This film director, comedian and art collector subscribes to 80 magazines monthly.
He has a collection of over 80,000 books.
His ‘Hairspray’ has been converted into a musical Broadway and it was re-made in 2007 with John Travolta starring in it. ‘Cry Baby’ has also been turned into a musical Broadway.
He has been creatively inspired by people like: Rainer Werner Fassbinder, Herschell Gordon Lewis, Federico Fellini, William Castle, Ingmar Bergman, etc. He has also been greatly inspired by the movie ‘The Wizard of Oz’.

Quotes By John Waters | Quote Of The Day | Top 100 Quotes

See the events in life of John Waters in Chronological Order