John McCain was an American politician who served as a Senator from Arizona. He was the Republican Party’s presidential nominee in the 2008 presidential elections. Born into a military family, he followed his family tradition and joined the U.S Naval Academy, eventually becoming a naval aviator. He took part in the Vietnam War and was almost killed, on a bombing mission over Hanoi, when his plane was shot down and he was taken a prisoner. John McCain's near-death experience in the Vietnam War didn’t deter him from returning back to resume duty. After retiring from the navy, he joined politics. He was elected to the U.S. House of Representatives twice and to the U.S Senate four times. He has earned a reputation of a "maverick" politician for his open disagreement with his party on certain issues. He played a key role in restoring diplomatic relations with Vietnam in the 1990s. He was a US Senator from Arizona from 1987 to 2018. He also contested for presidential nomination in 2000 against Texas Governor George W. Bush, and ran for the US presidential elections in 2008 opposite Democratic candidate Barack Obama but lost. American Celebrities
American Men
United States Naval Academy
Virgo Leaders
Male Leaders
Childhood & Early Life
John Sidney McCain III was born on August 29, 1936, at Coco Solo Naval Air Station, Panama Canal Zone, as the second of three kids, to naval officer John S. McCain Jr. and Roberta (Wright) McCain.
Both his father and paternal grandfather were four-star US navy admirals and came from a family of Scotch-Irish and English lineage.
After shifting between various navy bases in the US and abroad, his family settled in Arizona in 1951, where he went to a private preparatory boarding school, Episcopal High School, Alexandria, Virginia, graduating in 1954.
In order to continue the family tradition, he attended United States Naval Academy, Annapolis, and passed out in 1958. 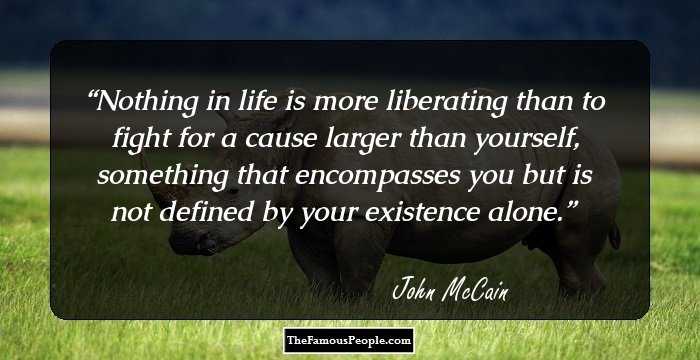 Quotes: You, Life, Yourself, Alone
Continue Reading Below
Career
John McCain started his military career with a two-and-half years training at Pensacola, thus becoming a naval aviator of ground-attack aircraft in 1960, and began flying USS Intrepid and USS Enterprise in the Caribbean and Mediterranean Seas.
During the Vietnam War in July 1967, John McCain volunteered to fly A-4 Skyhawk in the bombing campaign, Operation Rolling Thunder, where his plane went down in a bomb explosion, but McCain escaped with injuries on legs and chest.
In October 1967 while on his 23rd bombing mission, his A-4E Skyhawk was attacked over the North Vietnamese capital, Hanoi, where he broke both arms and one leg, and was held captive in Hoa Lo Prison or ‘Hanoi Hilton’.
He received medical treatment only after North Vietnamese discovered that his father was a high-ranking admiral. He rejected various offers of early release, not willing to violate military code of conduct and being used as a powerful piece of propaganda.
After spending five and a half years in different prison camps, including two years in solitary confinement, with continuous physical torture and maltreatment, he was released in March 1973 as a Prisoner of War (POW).
He underwent rehabilitation and physical therapy for months to get his injuries treated and resumed his flying duty in late 1974. However, his poor physical health deterred his ability to advance further in the Navy.
Visualizing his better prospects in politics after being assigned as the Navy’s liaison to the US Senate in 1977, he retired from the Navy in 1981 on the rank of a captain.
He moved to Arizona to his second wife, Cindy’s residence and started working in her father’s company, Hensley & Co, handling public relations and establishing political connections.
He was elected to the U.S. House of Representatives in 1982 and 1984. Being an ardent supporter of the Reagan administration, he was included in the House Foreign Affairs Committee.
Continue Reading Below
He was elected as the US Senate from Arizona in 1986, defeating longtime Arizona Republican Barry Goldwater, and was, thereafter re-elected in 1992, 1998, 2004, and 2010.
He served as a member on the Armed Services Committee, Commerce Committee, and Indian Affairs Committee, but rose to national prominence through his 1988 Republican National Convention speech.
In 1987, John McCain got involved in a scandal as a ‘Keating Five’ member for having connections with savings and loan swindler Charles Keating, Jr. Although he was cleared of the charges in 1991, he was criticized for showing ‘poor judgment’.
He served as the Chairman of the International Republican Institute, from January 1993 till his death in 2018.
Despite differing thoughts on several issues, like illegal immigration, pork barrel spending, global warming, torture, and constitutional amendment banning same-sex marriage, he supported Bush for 2004 presidential re-elections.
He has been a supporter of the 2007 surge of Iraq troops and stressed upon wining the 2001 Afghanistan War.
In 2015, he became the Chairman of the Senate Committee on Armed Services. 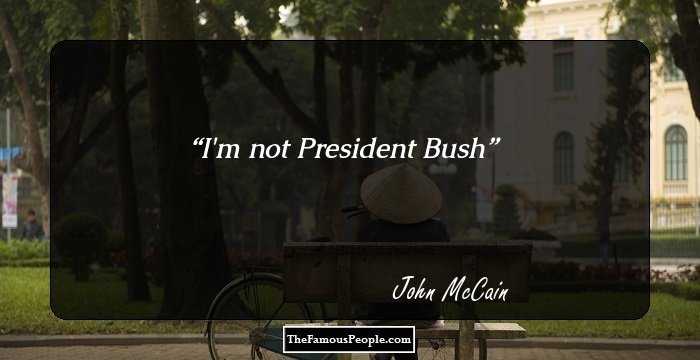 Major Works
In 2000, John McCain ran for Republican presidential nomination against his biggest rival, Texas Governor George W. Bush. After initial primary wins, he lost to Bush and endorsed him thereafter, making a few appearances during Bush’s campaign.
Continue Reading Below
He entered the presidential race for 2008 elections and became the Republic Party’s nominee, with Alaska Governor Sarah Palin as his vice-presidential running mate. He lost the election to Barack Obama.
Awards & Achievements
John McCain was honored with the Silver Star, Purple Heart, Bronze Star, Distinguished Flying Cross, Legion of Merit, and Navy Commendation Medal towards his military services.
In 1997, he was listed among the ’25 Most Influential People in America’, by Time magazine.
He received the Profile in Courage Award, shared with Russell Feingold, in 1999.
He was included in the ‘America’s 10 Best Senators’ list by Time magazine, in 2006. 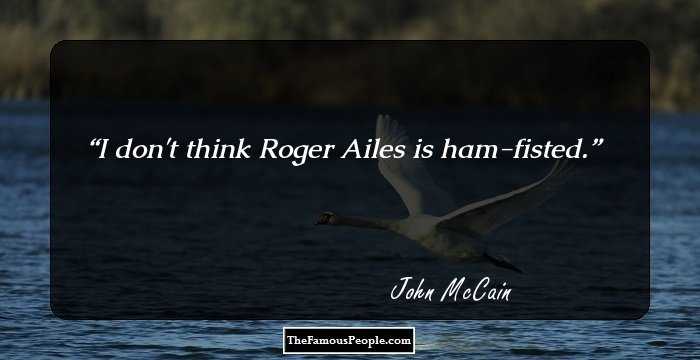 Quotes: Think
Personal Life & Legacy
In 1965, John McCain married Carol Shepp, a model from Philadelphia, thus becoming step-father to her two kids, Douglas and Andrew, from her previous marriage.
The couple had their first child in 1966: daughter Sidney. However, due to McCain’s extramarital affair with Cindy Lou Hensley, daughter of multimillionaire beer distributor in Phoenix, the couple divorced in 1980.
He married Cindy in 1980, a month after his divorce. The couple had four children: Meghan McCain (1984), John Sidney IV (1986), James Hensley (1988), and Bridget Leela (1991, adopted from a Bangladeshi orphanage).
John McCain died on August 25, 2018, four days before his 82nd birthday, at his home in Cornville, Arizona. His family had on August 24 announced that he would no longer receive treatment for cancer.
He was diagnosed with skin cancer, with lesions on face and arm, in 2000, and got all the cancerous tissues removed surgically. Later in 2001, he underwent routine surgery for prostate cancer.
The military tradition of the family has been followed by his sons. His son, John Sidney IV, is a helicopter pilot, while his other son James Hensley is serving in the US Marine Corps.

Quotes By John McCain | Quote Of The Day | Top 100 Quotes

See the events in life of John McCain in Chronological Order