John Luke Robertson rose to fame through the family television reality show ‘Duck Dynasty’. John first appeared in this show as a kid and viewers had seen him growing into an adult over the 10 seasons. What has surprised the audience, however, was John choosing a different path from that of his parents and grandparents. John today is identified as a children’s book author too.
In one of the interviews, the writer mentioned that although he is a part of one of the most famous families in America, Luke doesn’t want to merely settle for money and fame. He further added that the life at ‘Duck Dynasty’ was not his dream, but those of his grandparents, parents, uncles and aunts. The youngster has his own plans and wishes to pursue those.
This writer manages both his married life and studies very easily. Yes! He might only be in his early 20’s but he is already married to his high school sweetheart. Not only that, Luke is also a conference speaker and usually speaks about his family and his faith. Chloe Lukasiak
DID WE MISS SOMEONE?
CLICK HERE AND TELL US
WE'LL MAKE SURE
THEY'RE HERE A.S.A.P
Quick Facts

American People
Liberty University
Tall Celebrities
Tall Male Celebrities
Male Reality TV Personalities
The Meteoric Rise To Stardom
John got his big career break through the television reality show ‘Duck Dynasty’, which was aired on ‘A&E TV Network’ and consisted of more than 100 episodes. It is a reality show that revolved around the lives of John’s family members. Before being a part of the successful show these folks were also seen in ‘Benelli Presents Duck Commander’ and ‘Buck Commander’ - which also was a spin off to the former. ‘Buck Commander was aired on ‘Outdoor Channel’.

The show featured all the members of John’s family as well as its housekeeping staff. This show shattered all previous records of this channel, as the fourth season drew more than 1.8 million viewers, which made it the most watched non-fiction series in history. Apart from their own show, the family also appears in shows like ’Conan’, ‘Tonight Show with Jay Leno’, ‘Today’ and ‘Katie’; where they promote ‘Duck Dynasty’.
Gradually, from a reality star, Luke shifted his focus towards writing. He had released a book in the year 2014 titled ‘Be your Own Duck Commander’, which was inspired by his own family. This juvenile fiction includes a set of four books which are, ‘Willie’s Redneck Time Machine’, ‘Si in Space’, ‘Jase and The Deadliest Hunter’ and ‘Phil and the Ghost of Camp Ch-Yo-Ca’.

Live Original, it's been a good run! One more show in Nashville tonight! It has been incredible! (Ps. Sorry to whoever's drink and foot I crushed last night)

What Makes John Luke Robertson So Special
It is believed that John being a part of the ‘Duck Dynasty’ ensemble alone helped the show earn a high viewership. Everyone started loving the cute guy with the dimples and also enjoyed his funny onscreen gestures. John often wears a smile on his face which apparently fills many viewers with positivity.

If there is anything I learned in Uganda it's that the child sponsorships and donations going that way are working! The difference between the kids who get to come inside the school and the kids outside the fence is heartbreaking. HelpOneNow is an organization doing lots of great work all over the world. More info at http://helponenow.org/liveoriginal/

Beyond Fame
‘Duck Dynasty’ gained attention when the news of his marriage started spreading thick and fast. On the occasion of his 19th birthday, John proposed to his high school girlfriend, Kate McEacharn, who had an obvious answer, ‘yes!’ Probably, the best birthday gift the youngster could have asked for. It is also believed that John followed the footsteps of his parents who also got married early.
But the bigger news was the marriage of John and Kate and also the release of his book, ‘Young and Beardless: The Search for God, Purpose and a Meaningful Life’. John released his second book after the wedding and had also mentioned that his wife inspired the work. He also once conveyed the message that people should live their lives to the fullest. The book will take a tour through his life it starts with his life engagement and ends after their marriage.

Acaí Bowls at @duckanddressing right now! This super healthy meal will will be available at @theicecabin starting on Tuesday! ??

Behind The Curtains
John Luke Robertson was born to Willie Robertson and Korie Robertson in Monroe. He grew up along with his parents and sister and also attended the ‘Ouachita Christian High School’. He was very active student during his school days and was the member of the track team and tennis team.
He also got elected as the president of his class twice. During his leisure time he used to attend summer camps and went on mission trips. John got married early in his 20’s to his high school love, Kate McEacharn and both of them now attend the ‘Liberty University’. His marriage was also featured in the show that gained more than 3 million viewers.

The 4th of July only comes one day a year but every day is Independence Day in the US! Thank you to all who work to keep these monuments as memories of how far we have come and to point us to where we want to go (even though this one makes me look like a unicorn) #USA

Trivia
The Robertson family struck gold when John was 15 years old, till then most of his family members had other jobs and sources of income.

Age is but a number 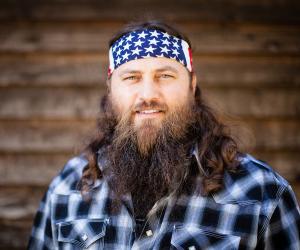