(Known for His Performances in 'Dangerous Liaisons' & 'Being John Malkovich')

John Gavin Malkovich is an American actor and producer best known for his performance in movies, such as ‘Places in the Heart’ and ‘In the Line of Fire’ for which he received ‘Academy Award’ nominations. He has enjoyed a long and productive career spanning four decades in Hollywood. Starting out as an actor, he eventually made it big as a producer too. A love for performance arts was something he was born with, though neither of his parents was from show business. He displayed a keen interest in acting from childhood and was an active participant in high school plays. As a teenager, he was part of a folk rock musical group and was also part of a summer theatre project. He began his acting career as a stage actor. He became a charter member of ‘Steppenwolf Theatre Company’ and appeared in several of their productions. He made his Broadway debut as ‘Biff’ in ‘Death of a Salesman.’ Following his successful stage career, he branched out into films. During his initial years in Hollywood, he managed to land only minor roles. He finally landed a major role in ‘Places in the Heart’ where he played ‘Mr. Will’ for which he was nominated for the ‘Academy Award’ for ‘Best Supporting Actor.’ American People
Directors
T V & Movie Producers
American Men
Illinois Actors
Childhood & Early Life
John Gavin Malkovich was born on December 9, 1953, in Christopher, Illinois, USA, to Daniel Malkovich and Joe Anne. His father was the conservation director for the State of Illinois and the publisher of ‘Outdoor Illinois,’ while his mother owned ‘Benton Evening News.’
He was overweight as a child and was often made fun of by his elder brother. Resolving to lose weight, he ate nothing but Jell-O for four months and shed several pounds.
He attended ‘Benton Consolidated High School’ and appeared in a number of plays during high school. He was also part of a folk rock music band.
He enrolled at ‘Eastern Illinois University’ and later went to ‘Illinois State University’ where he majored in theatre. 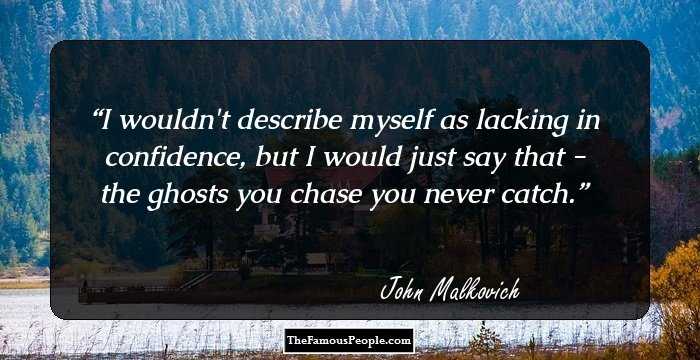 Quotes: You, Never, I
Continue Reading Below
Career
He joined ‘Steppenwolf Theatre Company’ in 1976 along with his friends Joan Allen, Gary Sinise, and Glenne Headly. He got noticed for his performance in Sam Shepard's family tragedy ‘Curse of the Starving Class’ at ‘Goodman Theatre’ in 1978.
In 1980, he appeared in Sam Shepard’s play ‘True West’ for which he won an ‘Obie Award.’ This was followed by a role in ‘A Streetcar Named Desire’ in Chicago’s ‘Wisdom Bridge Theatre’ in 1982.
After gaining prominence as a stage actor, he started playing film roles. Initially, he could land only minor roles. During the 1980s, he started landing substantial roles in films.
He played a blind boarder in the 1984 Depression Era film ‘Places in the Heart.’ He was much appreciated for his portrayal of ‘Mr. Will’ which is often considered his breakthrough role. He was nominated for an ‘Academy Award’ for this role.
In 1985, he acted alongside Dustin Hoffman, Kate Reid, and Stephen Lang in the CBS made-for-television film ‘Death of a Salesman.’ The film was based on the 1949 play of the same name by Arthur Miller. The film was a big hit.
He appeared in Stephen Frears’ historical drama ‘Dangerous Liaisons’ in 1988. He played the amoral ‘Vicomte de Valmont’ who is chosen by an evil Marquise to seduce an innocent young girl and ruin her. His performance was much appreciated by film critics.
He portrayed ‘Mitch Leary,’ a psychotic assassin in the crime thriller film ‘In the Line of Fire’ in 1993. The story revolves around a disillusioned former CIA agent who attempts to assassinate the president of the United States.
In 1999, he played a fictionalized version of himself in the comedy-fantasy film ‘Being John Malkovich.’ The film also had John Cusack, Cameron Diaz, and Catherine Keener in important roles. He won several awards and accolades for this role.
He acted in the television historical miniseries ‘Napoleon’ in 2002. He played ‘Charles Talleyrand’ in the series which explored the life of Napoleon Bonaparte and his military successes and failures. It was the most expensive miniseries made in Europe in 2002.
Continue Reading Below
He featured in the 2007 documentary film ‘Polis Is This: Charles Olson and the Persistence of Place’ which was a film about the distinguished poet.
He was part of the ensemble cast of the action comedy ‘Red’ (2010) which had actors like Bruce Willis, Morgan Freeman, and Helen Mirren. His other movies in the mid-2010s include ‘Lines of Wellington’ (2012), ‘Warm Bodies’ (2013), and ‘Cesar Chavez’ (2014).
In 2016, he was cast in the disaster movie ‘Deepwater Horizon.’ The following year, he was part of the romantic comedy ‘The Wilde Wedding’ where he was seen alongside Glenn Close, Patrick Stewart, and Minnie Driver.
He was one of the lead characters in the American-Bulgarian crime thriller ‘Bullet Head’ (2017). The following year, he was part of the action thriller ‘Mile 22.’
In 2018, he starred alongside Sandra Bullock in Netflix’s post-apocalyptic thriller ‘Bird Box.’ The following year, he was seen in the controversial biographical movie ‘Extremely Wicked, Shockingly Evil and Vile’ which was based on the life of serial killer Ted Bundy.
In the meantime, John also had recurring roles in TV series, such as ‘Crossbones,’ ‘Billions,’ ‘The ABC Murders,’ and ‘The New Pope.’ In 2020, the actor played ‘Dr. Adrian Mallory,’ one of the main characters, in Netflix’s web series ‘Space Force.’
His upcoming projects include ‘Ava’ and ‘El Tonto.’
A creative director, John has also directed many plays and movies, including a theater production of ‘Good Canary’ for which he won the ‘Molière Award’ for ‘Best Director.’ 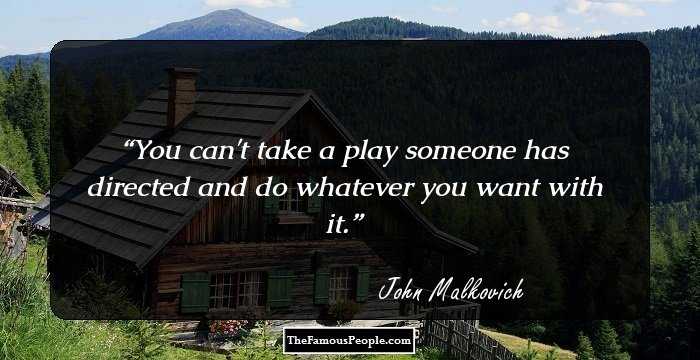 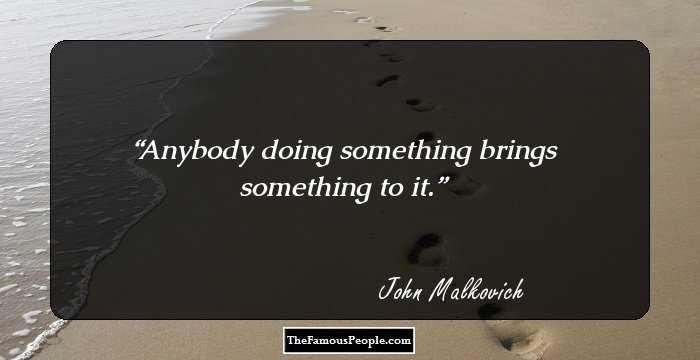 Personal Life & Legacy
He married actress Glenne Headly in 1982. It was reported that he had a fling with Michelle Pfeiffer which ended his marriage in 1988.
In 1989, he started a relationship with Nicoletta Peyran with whom he has two children.
He is the co-owner of a restaurant named ‘Bica do Sapato’ in Lisbon.
Trivia
Malkovich wrote and starred in a movie directed by Robert Rodriguez. Titled ‘100 Years: The Movie You Will Never See,’ the movie is currently locked in a vault in the south of France and would not be released until 2115.

Quotes By John Malkovich | Quote Of The Day | Top 100 Quotes

See the events in life of John Malkovich in Chronological Order