John Fowles was an illustrious English novelist. This biography offers detailed information about his childhood, life, works, achievements and timeline. David Thewlis
John Fowles initially started out as a teacher and was unaware that his life would change with the publication of his first novel, ‘The Collector’, which went on to become one of his best-known works in his long and fruitful career. Some of his other prominent works include ‘The Aristos’, ‘The Ebony Tower’, ‘Daniel Martin’, ‘The Magus’ and ‘A Maggot’ to name a select few. This prominent author and novelist gained immense fame during his lifetime but towards the end of his life, he could barely walk, with a verbal disorder and a bemused gaze. A master of literature, Fowles reiterated on the themes of philosophy, postmodernism, social life, personal relationships and feminism. His importance can be gauged by the fact that ‘The Times’ newspaper named him as one of the ’50 greatest British writers since 1945’. In addition to his novels, short stories, poems, theoretical writings and screenplays, Fowles also translated several plays from French for the National Theater. He is also accredited with writing several reference books on preservation and ecology, local history and the appreciation of nature. British Men
Male Writers
Aries Writers
Male Novelists
Childhood & Early Life
John Robert Fowles was born in Leigh-on-Sea, located 40 miles from London, to Gladys May Richards and Robert John Fowles. When he was only 6-years-old, his mother passed away.
He was close to his cousin, Peggy Fowles, who was 18 years old at the time of his birth and was more like his nursemaid. He studied at Alleyn Court Preparatory School and then at Bedford School, which he joined in 1939.
During his time in school, he was academically and athletically proficient and graduated from the institute in 1944. After school, he enrolled in a Naval Short Course at Edinburgh University, which he completed the next year. He was about to get a commission in the Royal Marines, but was instead assigned to Okehampton Camp for two years.
In 1947, he completed his military service and entered New College, Oxford, where he pursued French and German and later, focused only on French for his BA.
During his time in Oxford, he was greatly inspired by the works of Albert Camus and Jean-Paul Sartre, famous existentialists. 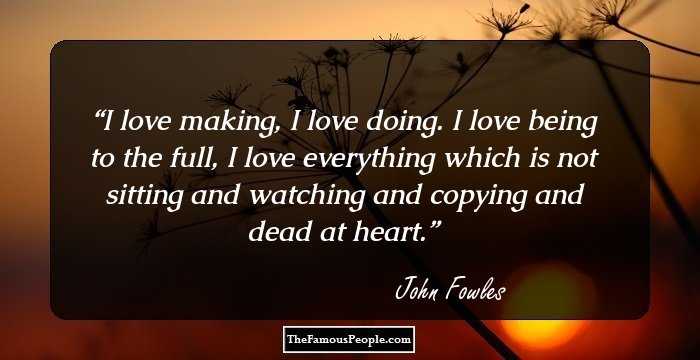 Quotes: Love, Heart, I
Continue Reading Below
You May Like

British Writers
British Novelists
Aries Men
Career
After he graduated from Oxford, he spent the next year at the University of Poitiers.
In 1951, he was employed as an English teacher at the Anargyrios and Korgialenios School of Spetses, which was set on the Peloponnesian island of Spetsai. During his time on the island, he began writing the draft for ‘The Magus’.
Although he was already working on ‘The Magus’, he began outlining what would go on to become one of his best works, ‘The Collector’. The book was finally published in 1963. The success of the novel was so huge that he realized in order to pursue a literary career; he would have to quit teaching.
He wrote a second book, ‘The Aristos: A Self Portrait in Ideas’, in 1964, which contained numerous metaphysical dictums. The following year, ‘The Collector’ was made into a film and Fowles left London to settle in a secluded farm house in Dorset.
After he completed his draft for ‘The Magus’, it was published in 1966. Two years later, it was made into a film.
In 1969, he authored and published ‘The French Lieutenant’s Woman’. His next work titled ‘The Ebony Tower’ came out four years later. The book made him even more successful than before and it was also adapted for television.
Following the success of ‘The Ebony Tower’, he authored ‘Shipwreck’ in 1974. Three years down the line, he would author and publish a typicalEnglish novel titled, ‘Daniel Martin’.
From 1978 to 1982, he went on to write a number of books, averaging one book a year. The books that were published include, ‘Islands’, ‘The Tree’, ‘The Enigma of Stonehenge’, ‘A Short History of Lyme Regis’ and Mantissa. Many of them were reviewed as average by the critics and were not as successful as his previous novels.
He then went on to author, ‘A Maggot’, in 1985, which is included in the list of his major works. At the time of its publication, it was classified as a postmodern novel and received rave reviews for its unique narrative style. The same year, he also co-authored, ‘Land’ with Fay Godwin.
Continue Reading Below
During this period, he also worked briefly as the overseer of the Lyme Regis Museum, retiring from his post in 1988. From then on, he became involved in politics and his output began to decline.
He authored ‘Lyme Regis Camera’ in 1990 and eight years later, wrote ‘Wormholes- Essays and Occasional Writings’, which were his only works of the 90s.
Towards the end of his life, he wrote ‘The Journals – Volume 1’ in 2003. Three years later, he produced last work ‘The Journals – Volume 2’. 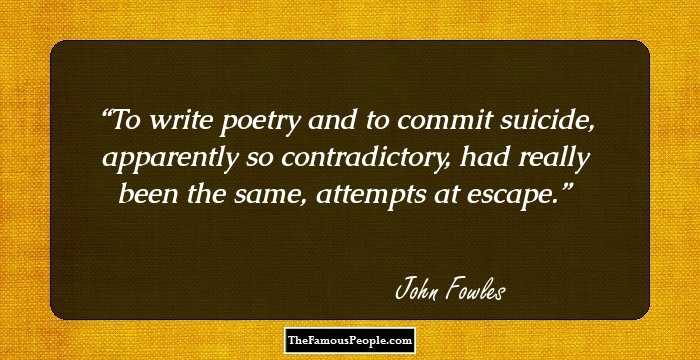 Major Works
‘The Collector’, was published in 1963 and became a huge hit with the readers as soon as it was published. The novel was adapted for film, which released two years after the release of the book and it was also adapted for theatre. The novel went on to become such a huge hit, that a song called ‘The Collector’ was inspired by it. Apart from movies and theatre, the basic plot of ‘The Collector’ has been used for television as well. The thematic rudiments of the novel have also been used for books and comics.
‘A Maggot’, written in 1985, is regarded as his magnum opus. Set against the backdrop of ancient timeframe and went on to become best-seller as soon as it was published. The narrative style became popular with the readers and is widely regarded as one of the greatest classics of his time. It became an instant best-seller.
Awards & Achievements
He won the Silver Pen Award in 1969.
In 1970, he was awarded the W.H. Smith Literary Award.
He was conferred the Christopher Award, in 1981.
He was made an honorary fellow of New College, Oxford, in 1997. 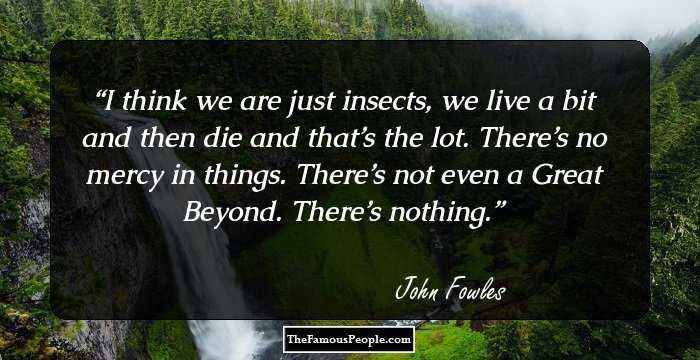 Quotes: Think, I
Personal Life & Legacy
He fell in love with Elizabeth Christy, who was already married at the time. After her marriage with her husband ended, she married Fowles on April 2, 1954. He became step-father for Christy’s daughter, Anna.
He later married another woman, Sarah Smith, in 1998.
He passed away after a prolonged illness at his home in Lyme Regis.
Trivia
This bestseller author was more eminent in the United States than in England which also explains why he felt like he was living like an ‘outcast’ and was living in ‘exile’ on home soil.
You May Like

Quotes By John Fowles | Quote Of The Day | Top 100 Quotes

See the events in life of John Fowles in Chronological Order