(American Writer and Winner of the 1962 Nobel Prize in Literature)

Advanced Search
John Steinbeck was a famous American author known for his novels of rustic settings, like 'Of Mice and Men', 'Tortilla Flat', 'The Grapes of Wrath', and 'East of Eden', amongst several others. This talented writer has inked as many as sixteen novels amongst a total of twenty-seven publications. A 'Nobel Prize' and 'Pulitzer Prize' winner, this writer took time to achieve success in life, but hardships faced along the way did not hamper his determination. Most of his works are set in California, where he was born and raised. He drew inspiration for his characters from people he came into contact with each day. Particularly close and influential was his friend, marine biologist, Ed Ricketts. The novel, 'Tortilla Flat', was the first successful book, and from then on, each literary work produced by this great writer has achieved critical success. Blunt and crisp in its tone, his books have also been the subject of controversy, often being banned, particularly in schools, for its use of obscene language. In the late 20th century, this writer became one of the most banned authors around the world. Years after his death, he is still considered one of the pioneering writers of American classics. Read on to know more about this writer’s life and works American Celebrities
American Men
Stanford University
Male Writers
Pisces Writers
Childhood & Early Life
John Ernst Steinbeck Jr. was born to Olive Hamilton and her husband John, in the Salinas municipality of the Monterey County, California, on February 27, 1902. His father was a treasurer for the government of Monterey County.
The young boy was raised as an Episcopal Christian, but he later became a sceptic. The rural area in which he was brought up later became the backdrop for most of his literary works.
In 1919, he completed his education from the 'Salinas High School', and went on to pursue a degree in Literature from the 'Stanford University'. He however dropped out and moved to New York City, where he earned a living by running small errands.
In the late 1920s, he came back to his home town, having failed to find a job as a writer, and began working as a guide for tourists, and a mannequin manufacturer. This was the period when global economic crisis ensued, and faced by the 'Great Depression', John struggled to make a living for himself and his family.
In 1930, he met marine biologist and writer, Ed Ricketts, who became a close friend, and served as a model for several of Steinbeck's characters. 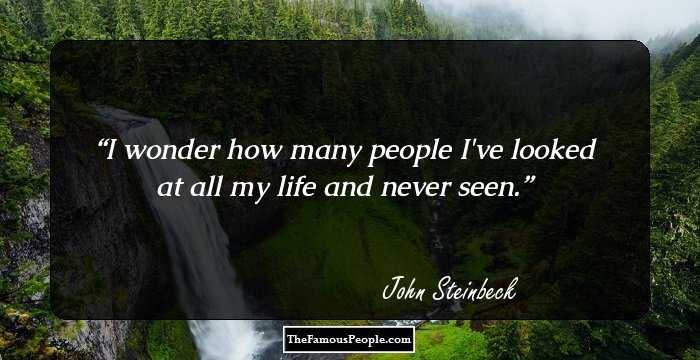 Quotes: Life, Never, I
Continue Reading Below
Career
Steinbeck brought out his debut novel, titled 'Cup of Gold', in the year 1929. The book however was not received well by readers across the country.
In 1932, he published the book, 'The Pastures of Heaven', which comprised of twelve short stories that were linked to each other. The next year, he wrote 'The Red Pony' and his second novel, 'To a God Unknown', both of which were only moderately successful.
It was only in 1935, that John tasted success with the novel, 'Tortilla Flat', which used Monterey, California as its backdrop. The novel, 'Tortilla Flat', set after the World War I, was a hit with both critics as well as his readers.
The same year, he became a member of the 'League of American Writers', where he was inspired by the works of Communist writers, Ella Winter and Lincoln Steffens.
In 1936, he produced the first book of the 'Dustbowl' trilogy, 'In Dubious Battle'. The book talks about a protest led by Californian fruit pickers, and aided by the assumed 'Communist Party'.
The second book of the 'Dustbowl' trilogy, 'Of Mice and Men' was published in 1937. The book was written as a drama, which touches upon controversial issues of the times, such as discrimination against people with mental disorders, apartheid, and the fight towards becoming independent.
In 1939, the third part of the 'Dustbowl' trilogy, 'The Grapes of Wrath' was printed. The book subtly but heavily supported the working class, and condemned capitalism. This led to the book being banned for several years, including in recent times, when a Mississippi school board prohibited the book for its abundant use of expletives.
Another novel by John, 'The Moon Is Down', published in 1942, describing a resistance movement held in Northern Europe, became quite popular with readers. The book was adapted into a movie, and it was presupposed that the resistance was being held in Norway, against the Nazis.
In 1943, this prolific writer worked for the 'New York Herald Tribune', and the 'Office of Strategic Services', reporting on the events of the World War II. Recent research also suggests that he had connections with the CIA, though it is still undetermined as to what his job was.
Continue Reading Below
After the war ended, Steinbeck returned home, and continued writing to cope with his depression, and physical injuries. During 1944-45, he penned the scripts for 'Lifeboat', a film by Alfred Hitchcock, and Irving Pichel's 'A Medal for Benny'.
In 1945, he authored the novel, 'Cannery Row', which spoke about the lives of people in a place called Ocean View Avenue in Monterey. This book too, like some of his other books were made into films later during the century.
Two years later, Steinbeck wrote the novel, 'The Pearl', with the assumption that it was going to be adapted into a movie. In 1952, he penned his longest running book, 'East of Eden', and also starred as the narrator for the movie, 'O. Henry's Full House'.
'East of Eden', which deals with the story of the families, the Trasks and the Hamiltons, with biblical references, was made into a movie, a few years later.
From 1954-61, he published the novels, 'Sweet Thursday', and 'The Winter of Our Discontent', as well as a travelogue titled 'Travels with Charley: In Search of America'. The travelogue talks about his adventures on a trip he takes with Charley, his dog, in a bid to rediscover America. 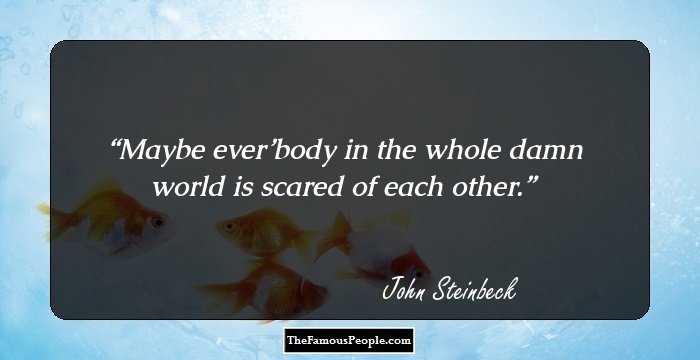 Major Works
'The Grapes of Wrath' is considered to be one of Steinbeck's greatest literary achievements. It is because of this book, that he earned the 'Pulitzer Prize' and the 'National Book Award' in 1940. This book, which has seen sales of more than fourteen million units, has been made into a movie featuring Jane Darwell and Henry Fonda.
Awards & Achievements
In 1940, this exceptional writer was honoured with the 'National Book Award', and the 'Pulitzer Prize', for the novel, 'The Grapes of Wrath', which is the third novel from the 'Dustbowl' Trilogy.
For his novel, 'The Moon is Down', published in 1945, this great writer was felicitated with the 'Haakon VII Cross of Freedom' for writing about the Norwegian resistance movement.
Continue Reading Below
Referred to as "a giant of American letters", in 1962, he was awarded the 'Nobel Prize in Literature'.
In September 1964, John received the most prestigious civilian award, Presidential Medal of Freedom, from the then Head of State, Lyndon B. Johnson.
In 2007, he was included posthumously in the California Hall of Fame for his contribution to the field of Literature. 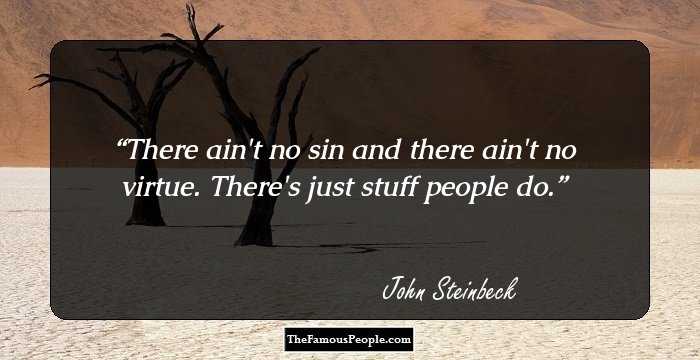 Personal Life & Legacy
John was married thrice, first with Carol Henning, in the year 1930, whom he divorced after twelve years of matrimony.
In 1942, he married Gwyndolyn Conger, with whom he had two sons, Thomas and John, but the relationship did not last long, and the couple separated after six years.
Steinbeck met American actress Elaine Scott in America, and got married to her in 1950.
On December 20, 1968, this brilliant writer succumbed to heart failure, in New York City. He was buried at Salinas, next to the graves of his parents and grandparents.
This splendid author's novel, 'The Acts of King Arthur and His Noble Knights', was published in its incomplete form, posthumously in 1976.
The Ocean View Avenue was later renamed as 'Cannery Row', after the immense popularity that the novel had gained.
In 1979, a stamp was issued by the US Government, with this famous writer's portrait.
Trivia
This American writer openly declared, after receiving the 'Nobel Prize', that Ernest Hemingway and William Faulkner were his most favourite writers.

Quotes By John Steinbeck | Quote Of The Day | Top 100 Quotes

See the events in life of John Steinbeck in Chronological Order