Mukesh Ambani is an Indian business tycoon and chairman of ‘Reliance Industries Limited’ (RIL). He is ranked among the richest people in the world. He is the richest person in India and is considered to be one of the world’s most powerful personalities. His brilliance and success can be evaluated from the fact that his company is currently India's most valuable company in terms of market value. After completing his education, he joined ‘Reliance Industries’ and assisted his father in the establishment of a textile industry. Gradually, with hard work and sincerity, he expanded the business to different sectors, including petrochemicals, retail, and telecommunications. After the death of his father, he and his brother Anil parted ways which resulted in the division of the company. His profound business sense and will to scale greater heights made him an icon for budding business visionaries in India. He has created great wealth not just for his family, but also for thousands of his shareholders and employees. He is a living legend among the business community of India and serves as an inspiration to millions of people around the world. Isha Ambani
DID WE MISS SOMEONE?
CLICK HERE AND TELL US
WE'LL MAKE SURE
THEY'RE HERE A.S.A.P
Quick Facts

Indian People
Yemeni
Indian,Yemeni People
Oil Barons
Telecommunication
Indian Men
Stanford University
Childhood & Early Life
He was born on April 19, 1957, in Aden, Yemen, to Dhirubhai Ambani and his wife, Kokilaben Ambani. He has two sisters, Dipti Salgaoncar and Nina Kothari, and a younger brother, Anil Ambani.
Dhirubhai Ambani used to work in a firm in Yemen before moving to Mumbai in 1958 where he started his own business of spices. Later, he started focusing on the textile business and gradually transformed into one of India’s most celebrated business magnates.
Mukesh received his early education from the ‘Hill Grange High School,’ Mumbai, along with his brother. Later, he enrolled at the ‘Institute Of Chemical Technology,’ Matunga, and obtained his BE degree in chemical engineering.
He then attended the ‘Stanford University,’ USA, to earn a master’s degree in business administration (MBA). However, he later opted to drop out to assist his father in establishing ‘Reliance Industries.’ 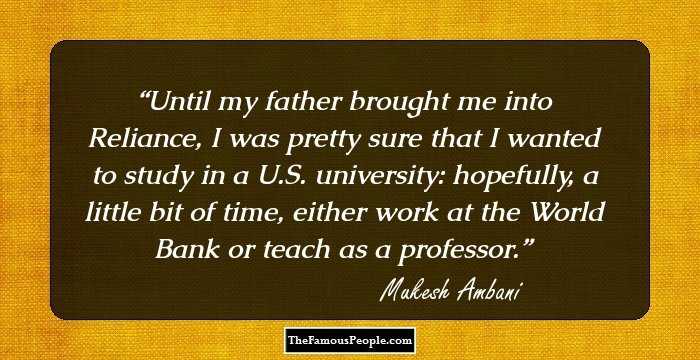 Quotes: Me, Time
Continue Reading Below
Career
Upon returning, he helped his father in setting up a polyester filament yarn (PFY) manufacturing plant. In 1981, he officially joined the ‘Reliance Industries.’
He emerged as the originator of Reliance’s backward integration from textiles to polyester fiber and later into petrochemicals. During the process, he led the creation of 51 new, world-class manufacturing facilities that involved diverse technologies which raised Reliance's manufacturing capacity.
He also helped in the establishment of ‘Reliance Infocomm Limited’ which focused on information and communications technology initiatives. After the business was divided between the two brothers, his younger brother took over the company which is now known as ‘Reliance Communications Limited.’
In 2008, his company ‘Reliance Industries’ bought a cricket team worth $111.9 million (Mumbai Indians) in ‘The Indian Premier League.’
He currently holds the position of chairman, managing director, chairman of ‘Finance Committee,’ and member of ‘Employees Stock Compensation Committee’ of ‘Reliance Industries Limited.’
His company currently operates in five major segments: exploration and production, refining and marketing, petrochemicals, retail, and telecommunications. It is ranked among the ‘Fortune Global 500’ companies and is India's most valuable company by market value.
He served on the board of directors of ‘Bank of America Corporation’ and on the ‘International Advisory Board of the Council on Foreign Relations.’ He has also served as the chairman of the ‘Board of Indian Institute of Management Bangalore’ (IIMB).
He revolutionized the Indian network communications by setting up the digital infrastructure of 4G network and forming the ‘Reliance Jio Infocomm Limited,’ popularly known as ‘Jio,’ which was made available in September 2016.
His company ‘Reliance’ has partnered with many international companies, such as ‘BP plc’ (British Petroleum Company plc), ‘Niantic Inc.,’ ‘Network 18,’ and ‘Eros International’ among many other companies.
Continue Reading Below 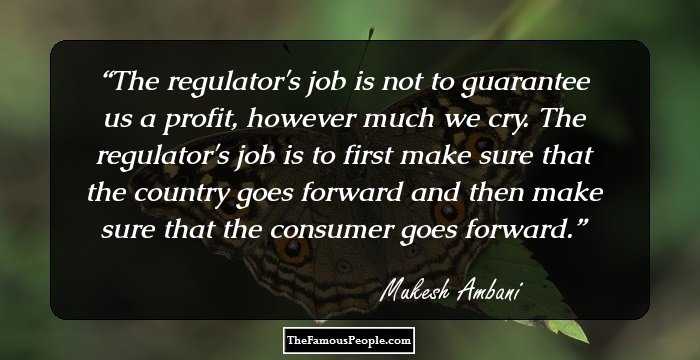 Major Works
His vision resulted in the formation of the world’s largest grassroots petroleum refinery at Jamnagar, India. The refinery is integrated with petrochemicals, power generation, port, and related infrastructure.
One of his most notable works is the establishment of ‘Reliance Communications Limited,’ one of the largest and most complex information and communications technology initiatives in the world.
His company ‘Reliance Jio Infocomm Limited’ became one of the pioneers in bringing the 4G network to India. The company also provides free Wi-Fi hotspot services which have been set-up across cities all over India.
Awards & Achievements
In 2004, he received the ‘World Communication Award’ for the ‘Most Influential Person in Telecommunications’ from ‘Total Telecom.’
In 2007, he was awarded the ‘United States-India Business Council Leadership Award’ by the ‘United States-India Business Council.’ The same year, he won the ‘Chitralekha Person of the Year Award,’ presented by the government of Gujarat.
In 2010, he was named the ‘Business Leader of the Year’ by ‘NDTV India’ and ‘Businessman of the Year’ by the ‘Financial Chronicle.’
In 2010, he was presented with the ‘School of Engineering and Applied Science Dean's Medal’ by the ‘University of Pennsylvania.’
In 2010, he also won the ‘Global Leadership Award,’ presented by the ‘Business Council for International Understanding.’
Continue Reading Below
In 2010, he received the Honorary Doctorate (Doctor of Science) degree from the ‘Maharaja Sayajirao University,’ Baroda.
In 2014, he was ranked 36 on ‘Forbes’ list of the world's most powerful people. In 2018, he was ranked 32 in the same list.
He was honored with the ‘Asia Society Leadership Award’ by the ‘Asia Society,’ Washington D.C., USA.
He won the ‘ET Business Leader Award’ in 2017 for ‘Corporate Excellency.’
He was also ranked among the ‘Fortune’ magazine’s ‘50 Greatest Leaders of 2018.’ 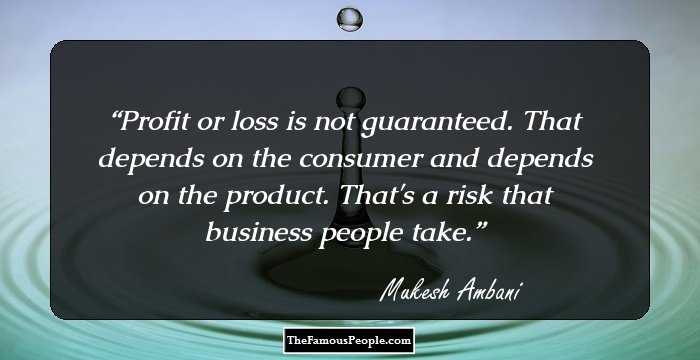 Quotes: Business
Personal Life & Legacy
He is married to Nita Ambani. The couple is blessed with three children; two sons, Anant and Akash, and a daughter, Isha.
He helped his younger brother Anil Ambani in a bailout of around 463 crores when the latter was guilty of contempt of court involving a partnership with ‘Ericsson’ in February 2019.
Trivia
Currently, his family resides in a private 27-storey building in Mumbai named ‘Antilia.’ Valued at US$1 billion, ‘Antilia’ is believed to be the most expensive home in history.
According to the US based news agency Bloomberg’s ‘Robin Hood Index’ in 2018, Ambani’s personal wealth can help in running the Indian Federal Government for 20 days.

Quotes By Mukesh Ambani | Quote Of The Day | Top 100 Quotes

See the events in life of Mukesh Ambani in Chronological Order