DID WE MISS SOMEONE?
CLICK HERE AND TELL US
WE'LL MAKE SURE
THEY'RE HERE A.S.A.P
Popularity Index
23
Quick Facts

awards: German Cross in Gold
Knight's Cross of the Iron Cross with Oak Leaves and Swords 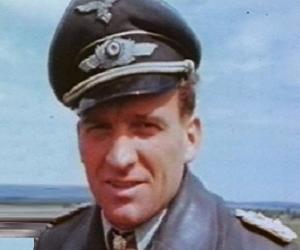 Who was Joachim Peiper?

Joachim Peiper was a field officer in the Waffen-SS during the Second World War. He was also the personal adjutant to Heinrich Himmler briefly during the war. Joachim was born into a middle class family to a father who previously worked in the Imperial German Army as a captain. He later retired from the army due to health reasons. While he was still a kid, Joachim lacked academic interests and followed his older brother and went into scouting. His brother Horst later joined the SS and inspired by him, Joachim decided to follow the same route and as he turned 18, he joined a group called Hitler Youth. He eventually joined the military and came in personal touch with Heinrich Himmler during the mid-1930s. In 1938, he was appointed as the adjutant to Himmler, with Karl Wolff being his commanding officer. Germany defeated Poland in 1939 and Joachim assisted Himmler in formulating policies for Polish people. He also fought on both the Eastern and Western fronts and was awarded by the Nazi government for his bravery. Following the war, he was subjected to trail for War Crimes in Belgium and was given a 12 years prison sentence. After the sentence was over, he tried living a normal life. In 1976, some intruders attacked him and set his house on fire. The officials concluded that he died of smoke inhalation. However the real cause of death is unknown since the body too badly burned.

German Soldiers
Aquarius Men
Childhood & Early Life
Joachim Peiper was born on January 30, 1915, in Berlin, German Empire. His family was originally from the Silesian region of Germany. He grew up in a middle class family with father Captain Waldemar Peiper, who served in the Imperial German Army before the birth of Joachim. He grew up with two older brothers, Hasso and Horst.
However, his father did not quit his ‘patriotic activities’ even after retiring because of Malaria. Following the culmination of the First World War, he joined Freikorps and played a key part in Silesian Uprisings.
Joachim’s father played a huge role in shaping the minds of his sons-Horst Peiper and Joachim. Horst went on joining the SS and Joachim followed the suite and desired to join the German Army at a very young age.
He was not a very bright student academically and did not secure good enough grades to qualify enrolling into a university. In 1926, when he saw his older brother joining the Scout Movement, he also became a part of it. It was then that he gained a substantial interest in joining the army. Horst later joined the SS and died during the German occupation of Poland in an accident.
Continue Reading Below
You May Like

Who Is The Most Popular BTS Member?
Career
Joachim joined the youth wing of the Nazi party, named Hitler Youth as soon as he became eligible after he turned 18. He followed his brother Horst into that as well and desired to join the cavalry division.
In October 1933, he went on joining the SS and within the next few years, he was promoted to higher positions several times within the SS. In January 1934, he was accepted into SS-Mann.
He participated in the famous Nuremberg Rally in 1934 and soon after that, he got in touch with Heinrich Himmler, one of the top men in the Nazi Party. Meeting him, he decided that he wanted to become one of the top-most SS officers.
He kept receiving several promotions in the next few years and for training, he was sent to the Dachau Concentration Camp in 1936. In the same year, under the commanding officer Sepp Dietrich, he was appointed as one of the bodyguards of Adolph Hitler, the Nazi Party chief.
In July 1938, he received a huge promotion as he was appointed the adjutant to Heinrich Himmler. On the job, he became acquainted with many senior level SS officers and Heinrich also became very fond of him. Joachim became Heinrich Himmler’s most admired Adjutant. Himmler even took Joachim to his state visit to Italy.
His real test was about to begin with the declaration of war. Germany attacked Poland in September 1939 and easily won. He was also with Himmler when Hitler ordered the murders of Polish Intellectuals. Joachim later wrote that Himmler was speechless for several days after that.
Germany had easily defeated Poland and being Himmler’s right hand man, he played a huge role in formulating the policies for Polish people.
In May 1940, he asked the permission to join a combat unit during the war with France. When the war was over, he returned back to his duties as an adjutant to Himmler. He later accompanied Himmler during his trips to the Balkans, Greece, Norway and Austria as his right hand man.
In the summer of 1941, he was freed from his duties as the adjutant to Himmler and embarked on a combat mission when Germany declared attack on Soviet Union. However, Joachim kept writing in Himmler’s personal diary until after a few months.
Continue Reading Below
In March 1943, Joachim was awarded with Germany’s highest honor, the Knight’s Cross of the Iron Cross, for which Himmler congratulated him personally on the radio.
He further participated in the Battle of Normandy and Battle of the Bulge.
Trial & Punishment
After the war was over, Joachim Peiper was accused of many war crimes, such as ordering the massacre of POWs and killing the innocents.
Following the surrender by the German Armies, Americans embarked on a full blown inquiry and Joachim was interrogated while he was jailed at Freising, Upper Bavaria.
His official trial took place in 1946, between May 16 and July 16. Main accusations were based on the written statements made by the defendants. However, the defence attorney tried to prove that the statements were taken falsely.
Several other witnesses claimed that Joachim gave orders for murdering the prisoners of war multiple times. Joachim accepted the charges on him on a few instances and on many others he said that the statements were taken from witnesses after torturing them.
On July 16, 1946, Joachim was sentenced to death by hanging. However, when German media accused that the confessions were taken through torture, a commission was established and Joachim’s sentence was converted into a life imprisonment and later, to time served.
Personal Life & Death
Joachim Peiper married Sigurd Hinrichsen, a secretary on Himmler’s personal staff, on June 26, 1939. The couple had three children together.
Following his release from the prison, Joachim tried living a normal life and moved to France and worked translating English books to German. He used the alias Rainer Buschmann for the same. He also worked at Porsche and Volkswagen. He led a discreet life in France.
He was shot to death by a vigilante group named ‘The Avengers,’ in France, on July 14, 1976. He was 61 years old at the time of his demise.
You May Like

See the events in life of Joachim Peiper in Chronological Order