(One of the Greatest Defensive Linemen of All Time)

Advanced Search
JJ Watt is an American professional football player who plays for the ‘Houston Texans.’ While in school, he was actively involved in hockey, basketball, baseball, and track and field events. However, he later concentrated on football and played for ‘Central Michigan’ and ‘Wisconsin’ in college. He entered the ‘National Football League (NFL) Draft’ as a top performer in all categories, except the 40-yard dash, and was offered a four-year contract by the ‘Houston Texans,’ which was later extended for another six years. He has named the ‘NFL Defensive Player of the Year,’ the ‘Sports Illustrated Sportsman of the Year,’ and the ‘Walter Payton NFL Man of the Year.’ Watt has had his share of injuries in the game. He has devoted his time to philanthropy whenever he has been off the field. He founded the ‘Justin J. Watt Foundation,’ which provides opportunities to children after schooling. He has also been involved with a number of other charities. He was made the vice president of power relations for ‘Reliant.’ He has received an honorary doctorate degree from ‘Baylor College of Medicine.’ He is currently dating soccer player Kealia Mae Ohai, who is the captain of the ‘Houston Dash’ and a member of the US women’s national soccer team. The sports couple have everything going for them at the moment. Cam Newton
22nd March In History
DID WE MISS SOMEONE?
CLICK HERE AND TELL US
WE'LL MAKE SURE
THEY'RE HERE A.S.A.P
Quick Facts

American People
American Men
University Of Wisconsin–Madison
Tall Celebrities
Tall Male Celebrities
Childhood & Early Life
Justin James Watt was born on March 22, 1989, in Waukesha, Wisconsin, US, to Connie and John Watt. His father was a firefighter, and his mother was a building-operations vice president. He has two younger brothers named Derek and TJ Watt who also grew up to become professional footballers.
He played hockey till the age of 13 but later became passionate about football and gave up hockey to concentrate on one game. He attended ‘Pewaukee High School,’ where he also played basketball and baseball, apart from participating in track and field events. He won the state-level title for shot put and set a new school record in 2007.
During his senior year, he made it to the first-team ‘All-State,’ ‘All-County,’ and ‘All-Conference’ selections. He won the ‘Woodland Conference Player of the Year Award’ and was named the team’s ‘Most Valuable Player’ (MVP).
He was regarded as a two-star recruit by ‘Rivals.com’ and ‘Scout.com.’ Although he was not a top-ranked player yet, he bagged the opportunity to play for ‘Central Michigan’ in the defensive position.
He received a scholarship from ‘Central Michigan University,’ where he played under coach, Butch Jones. He was advised to move from a defensive to an offensive position. However, he continued to play as a defensive end. He then joined the ‘University of Wisconsin-Madison,’ where he continued to play in the defensive position.
He was redshirted for the 2008 season and named ‘Wisconsin’s ‘Scout Team Player of the Year.’ He won the ‘Ronnie Lott Trophy’ and was voted as the team’s ‘MVP’ in 2010. By the end of his college days, he was named to the ‘All-American’ first-team and the ‘All-Big Ten’ first-team. 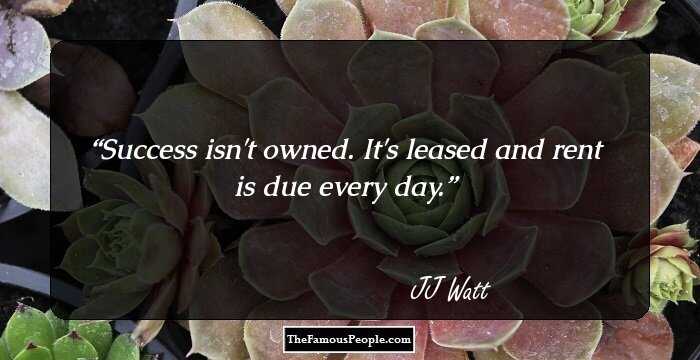 Continue Reading Below
Career
He skipped his senior season at ‘Wisconsin’ and entered the 2011 ‘NFL Draft’ as a top performer in all categories, except the 40-yard dash. He was offered a four-year, $11.24-million contract by the ‘Houston Texans’ in July 2011.
In 2011, the ‘Texans’ made it to the playoffs for the first time in the history of the franchise. Watt was voted the ‘Texans Team Rookie of the Year.’ He was also named to the ‘Pro-Football Weekly/ PWFA All Rookie Team’ and the ‘USA Today All-Joe Team.’
2012 was one of the most successful years in Watt’s career. He achieved 69 solo tackles, 12 assisted tackles, 20.5 sacks, 4 forced fumbles, and 2 fumble recoveries that season. He was named his team’s ‘MVP’ and the ‘AP Defensive Player of the Year.’
His personal performance in 2013 was equally good. However, his team failed to deliver and mostly lost that season. Watt was named to the ‘NFL Pro Bowl’ that year and also became the ‘Pro Bowl’ captain.
In 2014, he agreed to a six-year contract extension with the ‘Texans’ for $100 million, which made him the highest-paid non-quarterback of the ‘NFL.’ He earned the distinction of being the first ‘Texan’ defensive player to score a touchdown from scrimmage that year. He was named to the 2014 ‘All-Pro First-Team’ as a defensive end and made it to the ‘All-Pro Second-Team’ as a defensive tackle. He was also named to the 2015 ‘Pro Bowl’ and received the ‘Defensive Player of the Year’ award again.
He suffered a groin injury and fractured his left hand, which forced him to withdraw from the 2016 ‘Pro Bowl.’ He had to undergo a groin surgery. He also underwent a surgery of his back for a herniated disc that restricted his playing. However, he still managed to achieve the 35th spot on the ‘NFL Top 100 Players of 2017’ list.
He opened the 2017 season against the ‘Jacksonville Jaguars.’ However, he suffered a leg injury later in the season, which made him undergo another surgery. He was ruled out for the rest of the season. 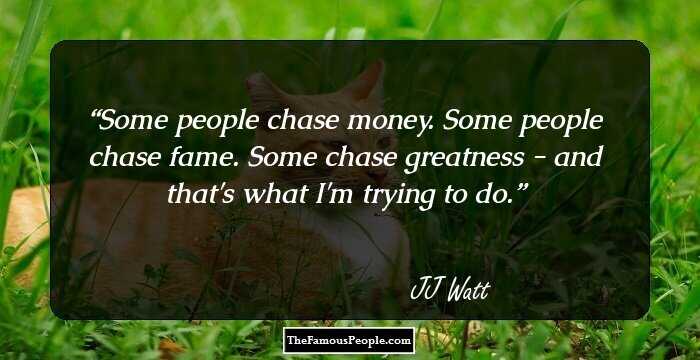 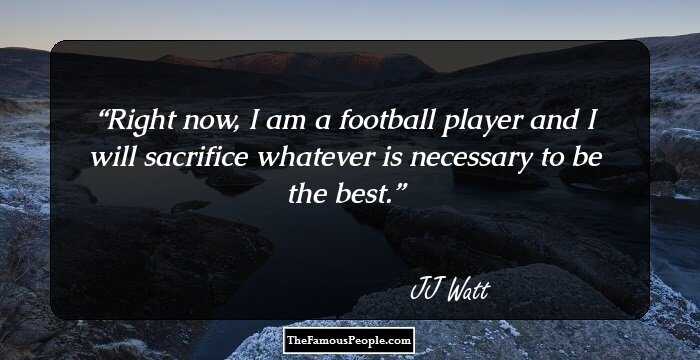 Personal Life
Watt belongs to a humble background. As a child, he had to give up hockey due to financial constraints. He even worked as a pizza-delivery boy while in college. However, things changed as his professional football career progressed. He is over six feet tall and weighs 131 kgs. His sturdy frame has been his biggest asset and has helped him in his game.
In 2017, he donated $100,000 and supported an online campaign for relief efforts in the Houston area. His philanthropic efforts earned him the ‘Walter Payton NFL Man of the Year’ honor. He also shared the title of the ‘Sports Illustrated Sportsperson of the Year.’
He is in a relationship with soccer player Kealia Mae Ohai, who is the captain of the ‘Houston Dash’ and a member of the US women’s national soccer team. He was introduced to her by his teammate, Brian Cushing, who is married to her elder sister.
In 2015, he was made the vice president of power relations for ‘Reliant,’ which is a subsidiary of ‘NRG Energy Inc.’ In 2018, he received an honorary doctorate degree from ‘Baylor College of Medicine.’
He is the founder of the ‘Justin J. Watt Foundation,’ which encourages children to take up sports and to keep away from vices that generally ruin the youth. The motto of his organization is “Dream Big, Work Hard.”
Trivia
He has played minor roles in the movie ‘Bad Moms’ and the TV series ‘New Girl’ and ‘The League.’
He earned letters in football, basketball, baseball, and track events during his years at ‘Pewaukee High School.’

See the events in life of JJ Watt in Chronological Order