Jinx or Jinx Da Rebel is an American YouTube star. A native of Wisconsin, Jinx had an active childhood. He excelled in sports and later enlisted in the US Air Force. After he was discharged from his military service, he returned home and looked for a creative outlet. He set up his YouTube channel in April 2013. The first video was uploaded in June that year. Jinx made videos on a wide range of topics, from challenges to comedy to music. However, it was through the reaction videos that he accumulated the most fans. As of early 2018, he had amassed 1.7 million subscribers and 116 million views. However, he received heavy criticism from some of the top YouTube stars because of the same reaction videos. As a result, he eventually stopped making reaction videos. Jinx is also an aspiring musician. He released his debut EP in 2015 and subsequently was accused of plagiarising music of other hip-hop artists. 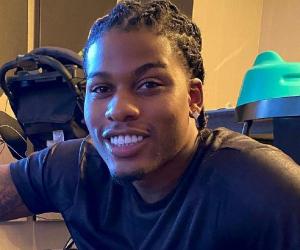 Logan Paul
Vloggers #615
YouTubers #597
DID WE MISS SOMEONE?
CLICK HERE AND TELL US
WE'LL MAKE SURE
THEY'RE HERE A.S.A.P
Quick Facts

American People
Wisconsin YouTubers
Male Youtubers
Scorpio Youtubers
American Vloggers
Career
After leaving the military, Jinx returned to the US. He was the first among his brothers to set up a channel on YouTube on April 30, 2013. The first video, titled ‘Star's "As The World Turns" (Season 1 - Japan Edition) (Ep. 1)’, went online on 3 June. While the number of views was significantly low in his early videos, it soon began to change. He made content on a variety of topics, but the majority of them were reaction videos. In time, he became a full-time reactor and was the first person on the website to be so. At the height of his popularity, he was getting millions of views on each upload.
Recommended Lists:

American YouTubers
Scorpio Men
On June 4, 2015, he set up his second channel for vlogging and movie reviews, naming it Jinx Reloaded. He has a third channel, Skye Crew, which he has set up for himself and his daughter. While Jinx Reloaded has 7.6 thousand subscribers, Skye Crew has about 202 thousand.
The heavy criticism concerning his reaction videos affected him deeply. In the end, Jinx decided not to make any more reaction videos but focused on uploading movie reviews and Snapchat vlogs. He moved all of his content from Jinx Reloaded to his main channel.
On August 7 and 8, 2015, he put out his Extended Play ‘The Rap of All Trades’ on SoundCloud and iTunes. Initially, it didn’t receive much attention. Following the reaction controversy, he thought it would be a good idea to make music videos of some of the songs from the EP. But it ended up attracting a fresh wave of criticism.
In the recent months, his content has considerably improved. He has been releasing comedy skits and unboxing videos. He has also been active as a hip-hop artist and recently put out three new tracks, ‘Never Say Never’, ‘I Want’, and ‘My Crew’.

Famous Beautiful Women With Green Eyes
Continue Reading Below
Controversies & Scandals
Following the success of Jinx and his brother as reactors, a lot of other channels decided to emulate them. By late 2015, there were thousands of reaction channels on YouTube. Soon the original creators on the site began to notice the trend. The response was immediate. There was universal condemnation. Some of the top YouTube stars, including Pewdiepie, Doctor Ian Mantis Toboggan, I Hate Everything, GradeAUnderA, LeafyIsHere, DramaAlert and JacksFilms, spoke out, criticising Jinx and his ilk. They felt that they were not adding any creative value to the video when they were reacting to them. Facing such widespread criticism, Jinx tried to defend himself in a video titled ‘Message to YouTubers’, but it ended up only aggravating the situation. Eventually, he announced that he was quitting doing reaction videos for good.
After he released the music videos of three tracks from his EP ‘The Rap of All Trades’, Jinx was accused of illegal sampling after using copyrighted material of another person in his music without giving the original creator due credit. All the songs were taken down either by DMCA or Jinx himself. Universal, which represented some of the original artists, launched a formal DMCA complaint against him and the tracks were subsequently removed from SoundCloud as well.

Personal Life
Brady was born on November 13, 1992, in Milwaukee, Wisconsin. He has two brothers who are known on YouTube as CJ SO COOL (Cordero James Brady) and CJ_on_32s. CJ SO COOL is a highly popular YouTube star with 4.8 million subscribers. CJ_on_32s has about 86 thousand subscribers. Brady and his brothers grew up in Gary, Indiana. He later served in the United States Air Force and was posted in Japan.
He is dating Mercedes Stanley, who has a channel on YouTube named MzBenz TV. On September 14, 2017, their daughter Skye Milan Mercedes Brady was born. Jinx currently resides in Las Vegas, Nevada.