Jesse Abraham Arthur McCartney is an American singer, songwriter, movie and stage actor. He is well-known for his long term association with Disney, for which he has made special appearances in sitcoms like ‘The Suite Life of Zack & Cody’, ‘Hannah Montana’ and done voiceovers for movies like ‘Tinker Bell’, ‘Alvin and Chipmunks’, etc. He is known for his famous debut album ‘Beautiful Souls’ for which he got Grammys nominations and bagged Teen Choice Awards and Nickelodeon Award. He has in all come out with three albums until now: ‘Beautiful Souls’, ‘Departure’ and ‘Departure: Recharged’. He has worked in movies like: ‘Keith’ and ‘Chernobyl Dairies’. McCartney showed his passion for acting since the age of seven when for the first time he acted in his local theater and from there on there was no looking back for him. He proclaims himself to be ambitious and once said in one of his interviews that he wants to go to the top and entertainment business is his life. He considers his songs to have a ‘blue-eyed soul’ to it and has always considers singer James Taylor as his inspiration. American People
Rock Singers
Rhythm & Blues Singers
American Men
Male Singers
Childhood & Early Life
McCartney was born on 9 April 1987 to Ginger and Scott McCartney in Westchester, New York. He was introduced to acting at an early age. He was only seven years old when he was introduced to the local community theatre production.
At the young age of 10 he got his big chance to play the lead role on the Broadway play called ‘The King and I’. He acted in the play along with another famous child artist called Ricky Ullman from ‘Phil of the Future’ fame. He was very well noticed in the production and from there onwards he was offered much bigger and lucrative opportunities in the field of entertainment. 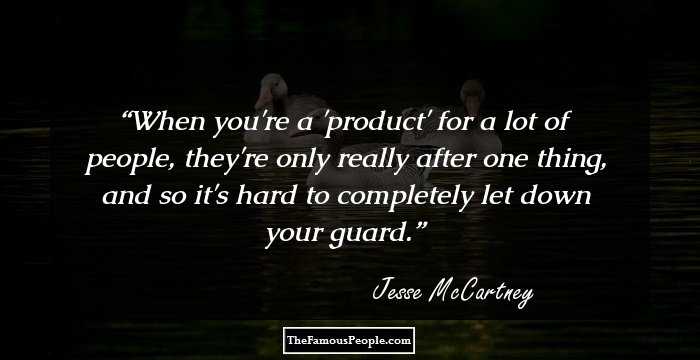 The Most Popular US Veterans
Career
In 1999, McCartney became a part of the American pop boy band called the Dream Street. He remained in the group until 2002. This worked as a stepping stone for his solo career later on. The band did very well in its days and earned a gold record with the release of their debut CD.
By 2002, at the age of fifteen, he started concentrating on his solo singing career and formed a local band with musicians like: Dillion Kondor on the guitar, Peter Chema on bass, Katie Spencer on the keyboards, Alex Russeku on drums, Karina LaGravinese and Sharisse Francisco as background vocals. This local band was managed by McCartney’s mother Ginger McCartney and Sherry Goffin Kondor, who also later co-produced his debut album ‘Beautiful Soul’.
In 2003, McCartney released his first solo EP featuring three hit songs: ‘Beautiful Soul’, ‘Don’t You’ and ‘Why Don’t You Kiss Her’. Around this time, he also got a chance to perform a duet with the famous Hollywood actress Anne Hathaway. The song was called ‘Don’t Go Breaking My Heart’ for the movie ‘Ella Enchanted’s’ original soundtrack.
In 2004, McCartney’s first solo album was released. It was called ‘Beautiful Soul’ and featured the hit of the same title. The album took two years in the making and finally got released on September. It was released in Europe in 2005. This album was his first formal solo work, internationally released. He classed it as an urban pop record.
‘Beautiful Soul’ has four tracks that were co-written by McCartney himself. The album, soon after its release, reached at number 15 on the Billboard 200. It was his highest certified album as of 2009. The album sold more than 1.5 million copies by the mid of 2006.
In 2005, he toured for ‘Beautiful Soul’. The most famous of these tours was the one at the Crest Theatre, Sacramento, California. He performed at around 56 places in the United States during this tour. The last spot was at the Madera District County Fair, Madera, California. Then later in the same year he extended his tour to Australia.
In 2006, McCartney released his second album called ‘Right Where You Want me’. He co-wrote most of the songs in the album. This album was considered more of a mature work from McCartney as compared to his debut album ‘Beautiful Soul’. According to the critics this album mirrored his musical and personal expansion and development. It placed itself at the number 14 on the Billboard 200.
It was in the year 2007 that McCartney co-wrote the famous hit ‘Bleeding Love’, which was sang by British singer Leona Lewis in the album ‘Spirit’, along with OneRepublic’s Ryan Tedder. This song was initially produced by the two talents boys for McCartney’s next album, but they ultimately decided to give it away to Leona Lewis. The song got so popular that it was nominated for the Record of the Year at the Grammys in 2009.
In 2008, his third album ‘Departure’ was released in the United States and Canada. The album showcased much more mature emotions from McCartney’s side and it secured 14th position on the Billboard 200. The hit single from the same album called ‘Leavin’ reached on the 10th position on the Billboard Hot 100. This was his highest charting hit ever.
Continue Reading Below
The same year, McCartney got on to the task of promoting his recent third album, ‘Departure’, on a shared tour with Jordin Sparks, American Idol Season Six winner. It was a month long tour. Both the artists did some shows at various theaters and low-budget venues to promote the album.
In 2009, he re-released his third album ‘Departure’ under the new name ‘Departure: Recharged’. This time the album featured popular songs: ‘Body Language’, ‘Oxygen’, ‘Crash & Burn’ and ‘In My Veins’. It also included a remix version of ‘How Do Sleep?’ from the original ‘Departure’ and featured the famous rapper Ludacris. ‘Body Language’ featured the rapper T-Pain and it was spotted at number 35 on the Hot 100.
In 2010, it was announced to the media that McCartney’s fourth album ‘Have It All’ will be released in early 2011 but later on it was said that it will release in December 2010. But later on he announced to his fans on his official Facebook page that he has again decided to release the album in 2011. When even that did not happen he said on his Twitter page that the release of ‘Have It All’ has been shelved until the time the verdict on his lead role in a television series comes out.
McCartney’s television career has been a colorful one. His first ever stint with TV started with ABC’s ‘All My Children’, in which he played the character of ‘Adam Chandler Jr.’. In 2005 and 2007 he appeared on popular Disney sitcoms, playing himself, like: ‘The Suite Life of Zack & Cody’ and ‘Hannah Montana’ (which starred Miley Cyrus). In 2008 and 2009 he gave his voice to Disney movies like: ‘Horton Hears A Who!’, ‘Alvin and the Chipmunks’, ‘Alvin and the Chipmunks: The Squeakquel’, ‘Alvin and the Chipmunks: Chipwrecked’ and ‘Tinker Bell’.
In 2008, McCartney worked with Elisabeth Harnois in the movie ‘Keith’, directed by Todd Kessler. He has the main lead in the movie. Also, in the same year, he was being considered to act in M. Night Shyamalan’s adaptation of ‘Avatar: The Last Airbender’.
In 2009, he gave the voice for ‘Ventus’, a video game character from the famous video game series called ‘Kingdom Hearts Birth by Sleep. He also reprised roles in ‘Kingdom Hearts 3D: Dream Drop Distance’. In the year 2012, he featured in the horror movie called ‘Chernobyl Dairies’. 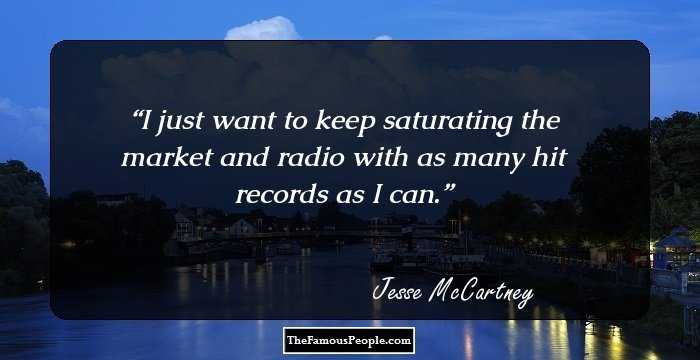 Awards & Achievements
McCartney won multiple awards in 2005 at the Teen Choice Awards. He was awarded for his debut album ‘Beautiful Souls’ under the categories of: Choice Crossover Artist, Choice Male Artist and Choice Breakout – Male. In the same year, he also bagged the Nickelodeon Kids’ Choice Awards for the Favorite Male Singer of the year.
Trivia
He has made contribution to various Disney soundtracks like: ‘That’s So Raven’, ‘Sydney White’, ‘Hannah Montana’, ‘The Princess Diaries 2: Royal Engagement’, ‘Lizzie McGuire’, ‘Stuck in the Suburbs’, etc.
McCartney’s fragrance is called ‘Wanted By Jesse’.
McCartney was replaced by actor Dev Patel for the lead role in the movie ‘Avatar: The Last Airbender’.
He was considered for the role of Sebastion in the movie ‘She’s The Man’.
He auditioned for a role in ‘The Sixth Sense’. 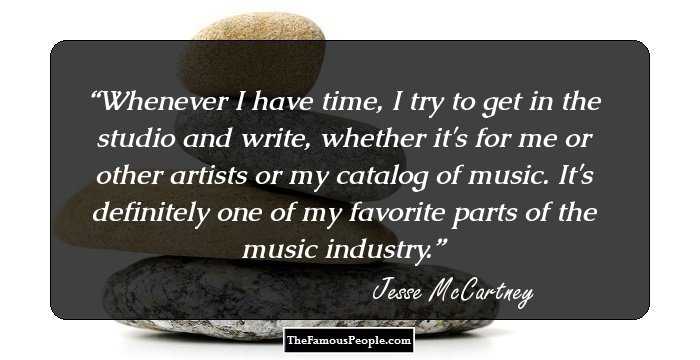 Quotes: Me, Time, Music
Recommended Lists:
Singers #761
You May Like

Quotes By Jesse McCartney | Quote Of The Day | Top 100 Quotes

See the events in life of Jesse McCartney in Chronological Order