Who is Jerry Springer?

Gerald Norman ‘Jerry’ Springer is an England born American talk show host of America’s most famous tabloid talk show, ‘The Jerry Springer Show’. This show came to him with a lot of hard work and political expertise that he inculcated in his substantial career in politics of Ohio. Springer started his career at a law firm after finishing his law degree from the Northwestern University. He was then lucky enough to come in contact with Senator Robert Kennedy, who asked him to work on his presidential campaign but as soon as Springer got down to it, Kennedy was killed and left him feeling utterly shattered. He then decided to join politics and served five terms at a position in the Cincinnati city council and two terms as the mayor of Cincinnati city. Although he aspired to be the governor of Ohio but it did not materialize and instead he became a political reporter and commentator. In the early 90s, he was given ‘The Jerry Springer Show’, which took him to the heights of his career as a television host and anchor. Talk Show Hosts
Political Leaders
American Men
British Men
Childhood & Early Life
Jerry Springer was born in London, England, to Margot and Richard Springer. He was born inside the Highgate tube station in London as it was at the time used as a shelter from German attacks during World War II.
Springer was brought up in East Finchley where his father owned a shoe shop and his mother was a bank clerk. In 1949, the Springer family immigrated to States and started living in Queens, New York.
He attended Tulane University, New Orleans, Louisiana to pursue Bachelor of Arts and he majored in political science. Later in 1968, Springer got a Juris Doctor degree from the Northwestern University. 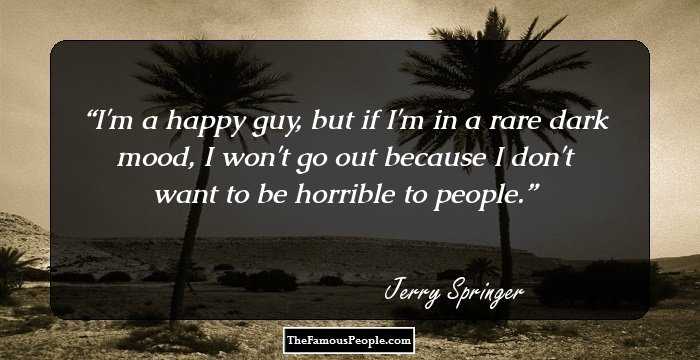 Northwestern University
Tall Celebrities
Tall Male Celebrities
Male Leaders
Career
After Springer finished his law degree, he came in contact with the New York Senator, Robert Kennedy during a social event. He was signed on by him to do his presidential campaign but Kennedy was assassinated shortly afterwards.
Kennedy’s assassination left him feeling emotionally traumatized and he decided to carry on with Kennedy’s political ideology. Springer started working at Frost & Jacobs law firm in Cincinnati, Ohio.
Springer was the leader of the movement to lower the voting age from 21 to 18, while he was still working at the law firm. This concluded in his Senate Judiciary Committee authentication supporting sanction of the 26th Amendment.
In 1970, he contested for Congress in Ohio and almost defeated the already established Republican politician, Donald Clancy. In the following year, he was elected to the Cincinnati city council.
Springer had to resign from Cincinnati city council in 1974 on the grounds that he had hired a prostitute. He came clean in the press about it and political analysts at the time predicted that his political career was over.
In 1971, he was elected as the mayor of the Cincinnati, after serving five terms with the Cincinnati city council. He was the mayor for two terms.
He contested for the position of the Governor of Ohio in 1982, but he unfortunately did not win that one and instead signed on with Cincinnati NBC affiliate, WLWT, as a political reporter and commentator.
With his steady success at the channel, Springer was named as the primary news anchor and Managing Editor and in two years, he became No.1 news anchor of Cincinnati. He won ten local Emmy Awards for his nightly commentaries.
‘The Jerry Springer Show’ first aired in 1991; it was designed by WLWT and addressed topics like homelessness and gun politics. The show was given a new image after three years, by addressing tabloid sensationalized topics, to popularize it.
Continue Reading Below
From 2000-2001, he hosted a David Letterman style talk show in the UK for Channel 5, titled ‘Late Night with Jerry Springer’. He also hosted the UK version of ‘Greed’ during the same time.
In 2005, a British version of ‘The Jerry Springer Show’ was launched, titled ‘The Springer Show’. It gained a lot of popularity even though it was a subdued version of the original. He also hosted ‘Springer on the Radio’ in the same year.
Springer, with his image as a witty host, hosted Miss Universe 2008 and also guest hosted for WWE Raw at Wells Fargo Arena in Iowa, in the following years. Around the same time, he hosted ‘Baggage’––a dating game show. 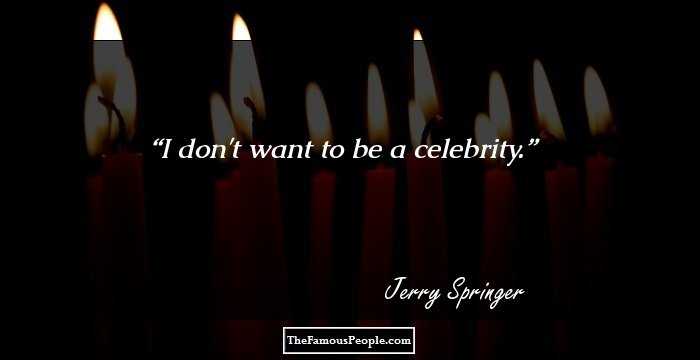 British Leaders
Aquarius Leaders
Male Tv Anchors
American Leaders
Major Works
Apart from his political career as a member of Cincinnati city council and mayor of Cincinnati, Springer’s most famous work of his lifetime is his ‘The Jerry Springer Show’ which has been running since 1991 until present date.
Recommended Lists: 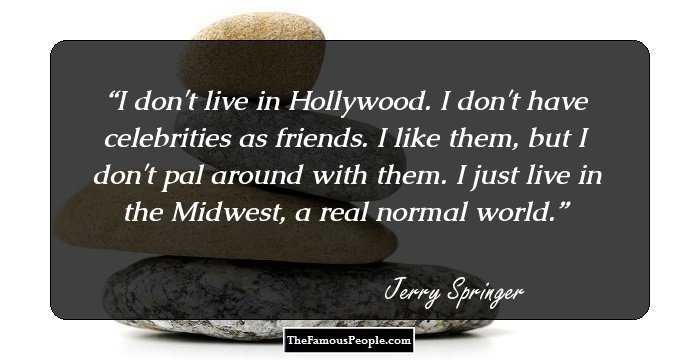 Quotes By Jerry Springer | Quote Of The Day | Top 100 Quotes

See the events in life of Jerry Springer in Chronological Order