(Comedian, Actor and One of the Most Significant American Cultural Figures of All Time)

Jerry Lewis, the comedian who rose to fame as one of the wildly popular duo ‘Martin and Lewis’ during the 1950s is more than just a funny man—he is also an accomplished actor, film producer and screenwriter. The son of professional entertainers, he was introduced to the world of show business when he was just five years old. By the time he was in his teens he had developed his own comic routine, ‘Record Act’, an exaggerated mime of popular songs. He met Dean Martin, a nightclub singer with whom he formed the comedy pair, Martin and Lewis. The pair performed at nightclubs before making their transition to radio, films and television. Famous for their slapstick comedy and exaggerated physical acts, the duo reached the heights of popularity when they appeared in a series of comedy films. In spite of working as a team, each member carved his own individual niche which enabled both to embark into successful solo careers after the team dissolved. Jerry appeared in ‘The Delicate Delinquent’—his first film without Martin—which went on to become a huge hit and established him as a solo actor. The actor eventually moved on to film direction and production winning the Best Director of the Year award eight times in Europe. Jennifer Coolidge
16th March In History
DID WE MISS SOMEONE?
CLICK HERE AND TELL US
WE'LL MAKE SURE
THEY'RE HERE A.S.A.P
Quick Facts

Cause of Death: Peripheral Artery Disease

American Celebrities
Jewish Comedians
Actors
Comedians
Directors
Childhood & Early Life
Jerry Lewis’s name at birth was Joseph Levitch. His father Daniel was an actor and master of ceremonies who performed under the name Danny Lewis. His mother Rachael was a piano player for the New York City radio station.
He started performing along with his parents when he was five years old. He dropped out of the Irvington High School to pursue a career as a full-time entertainer and started using the stage name Jerry Lewis. 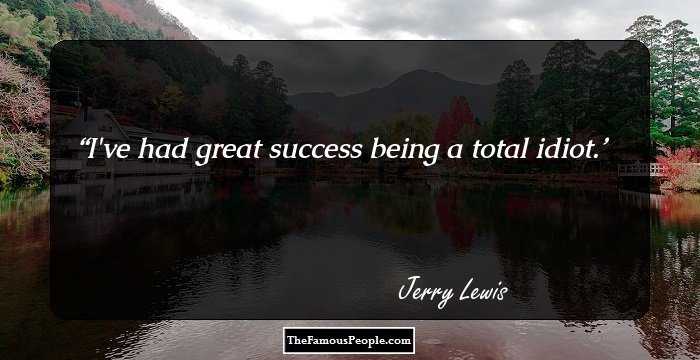 Continue Reading Below
Career
He developed a comedic routine called the ‘Record Act’ in which he mimed the lyrics of popular songs while a phonograph played the songs offstage. He was given a chance to perform at a burlesque house which flopped. Unable to get any more shows he worked at odd jobs to make ends meet.
His father’s friend, Max Coleman helped him book a performance at Brown’s Hotel in New York. This time his show was a big success and motivated him to further his career in this field.
While performing at nightclubs in 1945, he met a singer Dean Martin. This meeting proved to be fortuitous and the two went on to form the comedic pair Martin and Lewis in 1946. Their initial routine consisted of Martin singing a song which Lewis interrupted with ad-libbed insults.
Lewis played the comedian while Martin served as the straight man. The pair developed a routine characterized by ad-libbing and impromptu jokes instead of planned rehearsals. By the late 1940s the pair had a prominent national presence.
The duo made many appearances on early live television in 1948, making their debut on Ed Sullivan’s ‘Toast of the Town’. The very next year they had their own regular radio show called ‘The Martin and Lewis Show’.
Paramount producer Hal Wallis had seen them in performance and was quite impressed by them. He booked them to a film contract and Lewis and Martin made their big screen debut with ‘My Friend Irma’ in 1949.
Together they starred in 16 films including ‘At War with the Army’ (1950), ‘Living it Up’ (1954), and ‘You’re Never Too Young’ (1955), most of which became extremely popular. The famous duo also continued appearing on radio and television.
Over the years their relationship became strained and their partnership ended in 1956. ‘Hollywood or Bust’ (1956) was their last movie together. After ending their partnership, both the comedians embarked on solo careers.
Lewis appeared in his first film without Martin in 1957. The movie, titled ‘The Delicate Delinquent’ was a big hit and gave him the confidence to move on as a solo artist.
Continue Reading Below
He turned director with the 1960 film ‘The Bellboy’ which he also wrote and starred in. Over the next three decades he directed and acted in several films like ‘The Nutty Professor’ (1963), ‘The Big Mouth’ (1967), ‘One More Time’ (1970), and ‘Cracking Up’ (1983).
He has also made several appearances on stage. He made his Broadway debut as a replacement cast member in the revival of the baseball musical, ‘Damn Yankees’ in 1994. Apart from the U.S. he is also a much respected artist all over Europe. 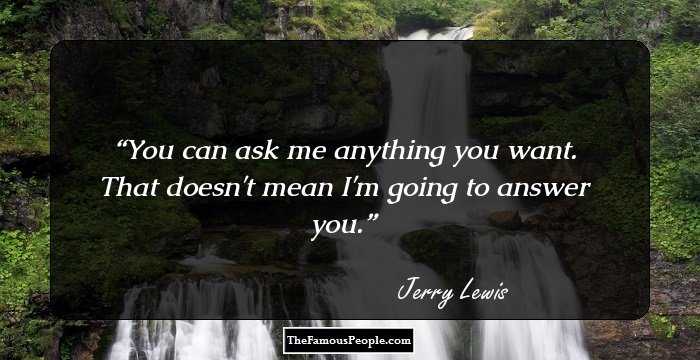 Quotes: Me
Major Works
He rose to international prominence as a part of the comedy duo ‘Martin and Lewis’ which he had formed with Dean Martin. The pair was the hottest act in America during the 1950s and used to perform in nightclubs before venturing into radio, television and films. They appeared together in 16 super hit movies.
Awards & Achievements
He was presented with the Jefferson Award for the ‘Greatest Public Service Benefiting the Disadvantaged’ in June 1978.
He was honored with the prestigious Hubert H. Humphrey Humanitarian Award in 1980. The award is given to individuals who best exemplify the ideals and courage of the late Vice President. 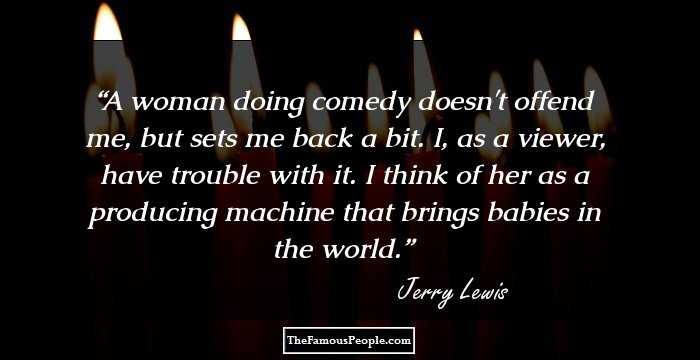 Quotes: Think
Personal Life & Legacy
He married Patti Palmer, a singer, in 1944. The couple divorced after several years in 1980.
His second marriage was to a much younger woman, SanDee Pitnick, a Las Vegas dancer, in 1983. He was 56 and she was 32 at the time of the wedding.
He has a total of seven children.
He served as national chairman of the Muscular Dystrophy Association (MDA) from the 1950s until 2011. He has raised over $2.6 billion for the cause.
Trivia
This famous comedian never wears one pair of socks twice. He always wears new ones and gives them to charity after one use.

Quotes By Jerry Lewis | Quote Of The Day | Top 100 Quotes

See the events in life of Jerry Lewis in Chronological Order