J.D. Salinger was an American writer who became famous for his novel, 'The Catcher in the Rye'. Having started writing short stories in high school, this author struggled early in his career, to get his works recognized and published. Some of his writings were published by his teacher Whit Burnett, in the magazine 'Story'. However, the aspiring writer's aim was to get them printed in 'The New Yorker' magazine. The magazine received many submissions from the writer, but rejected most of them, except for 'Slight Rebellion off Madison', 'A Perfect Day for Bananafish', and 'Hapworth 16, 1924'. After 'The Catcher in the Rye' was published, this author shot to fame, and produced other extremely popular books like 'Franny and Zooey', 'Nine Stories', and 'Raise High the Roof Beam, Carpenters and Seymour: An Introduction'. His most famous creation is that of the 'Glass' family which appears in almost all his stories. He is also known for having introduced the character of Holden Caulfield, who acts as the epitome of the chaos going on in any teenager's life. Once the author got a taste of fame, he chose to stay away from public life. He became a recluse, thus giving rise to a lot of speculations about his private life. American Celebrities
Short Story Writers
American Men
Columbia University
New York University
Childhood & Early Life
Jerome David Salinger was born to a Jewish cheese-seller, Sol, and his Irish wife, Marie Jillich, in New York City, on January 1, 1919. The family, along with Jerome's older sibling, Doris, lived in Manhattan.
In 1932, the family took up residence in Park Avenue, New York City, where Jerome began attending the 'McBurney School'. In school, the young boy displayed an innate talent for literature, acting, and fencing.
Later, he joined the 'Valley Forge Military Academy', in Pennsylvania, where the boy started his literary activities, including penning down stories, and editing 'Cross Sabres', the school's yearbook. He also was a member of various co-curricular groups including the Aviation and French clubs.
After graduating from the 'Valley Forge Military Academy', he enrolled at the 'New York University', in 1936. He began pursuing a course in special education, but finding it difficult, quit college. 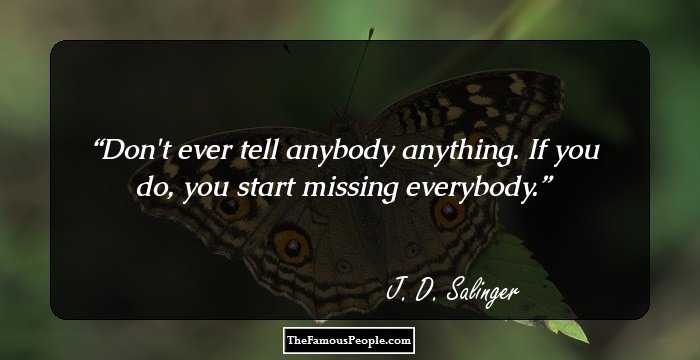 Quotes: You
Continue Reading Below
Career
In 1937, Jerome travelled to Vienna to get trained in meat-packing, but left the place within a year, just before Austria became a part of Nazi Germany.
In 1938, he began attending the 'Ursinus College' in Pennsylvania, but dropped out once more. The following year, he enrolled for a writing class held in the evenings at the 'School of General Studies' affiliated to 'Columbia University'.
In 1939, during his time at 'Columbia University', he was trained and motivated by writer, Whit Burnett. Burnett was the founder and editor of a magazine called 'Story', and Salinger's short story 'The Young Folks' was printed the following year.
The budding writer worked with the 'Caribbean cruise ship' for a short period of time. During the same time, in 1941, he gave several short stories for publishing in 'The New Yorker' magazine, which were initially rejected.
In December, his story 'Slight Rebellion off Madison' was selected and printed by the magazine. The story depicted the life of a fictional teenager, Holden Caulfield, set against the backdrop of war. This was a time when the Pearl Harbour in the U.S. was attacked by Japan, and the story could not be published.
From 1942-45, during the World War II, the aspiring writer served in the army, participating in major fights like the 'Battle of Hürtgen Forest' and 'Battle of the Bulge'.
During his time at the army, Salinger became friends with fellow writer, Ernest Hemingway, and regularly maintained correspondence with the latter. He also published many stories in magazines like 'The Saturday Evening Post', and 'Collier's'.
In 1946, Jerome's mentor Whit Burnett offered to publish the former's collection of short stories, through a publication house, 'Lippincott Imprint'. The publishing house did not agree to print the book, and the writer blamed his former teacher for the rejection.
The following year, William Maxwell, editor of the 'The New Yorker' magazine liked Salinger's story, 'The Bananafish', but sent it back for rework. The writer modified it, and renamed the story to 'A Perfect Day for Bananafish', and it was published in the magazine on January 31, 1948.
Continue Reading Below
On July 16, 1951, the prolific writer's book, 'The Catcher in the Rye' was printed by the publishing firm, 'Little, Brown and Company'. The novel, used the writer's previous creation Holden Caulfield as the narrator, and was widely embraced by the readers. The attention showered upon the writer was overwhelming, and Jerome decided to stay away from the spotlight.
A short story collection titled 'Nine Stories', which featured the 'Glass' family, a set of characters that appeared in many of the author's literary works, was published in 1953. This book too, gained immense popularity with readers as well as critics.
In 1961, the talented writer released 'Franny and Zooey', a compilation of one short story, and one novella. The short story, 'Franny', and the novella, 'Zooey', dealt with two members of the 'Glass' family, which were once again quite well-received by readers.
Two years later, Salinger's last book, 'Raise High the Roof Beam, Carpenters and Seymour: An Introduction', was released by 'Little, Brown and Company'. In 1963, the year of its publication, it was named one of the top three best-sellers in the U.S., by news magazine 'Publishers Weekly'.
Jerome's last literary work, a novella called 'Hapworth 16, 1924', was published by 'The New Yorker' magazine. After the publication of this story, the celebrated author did not release any more books, and shied away from the limelight. 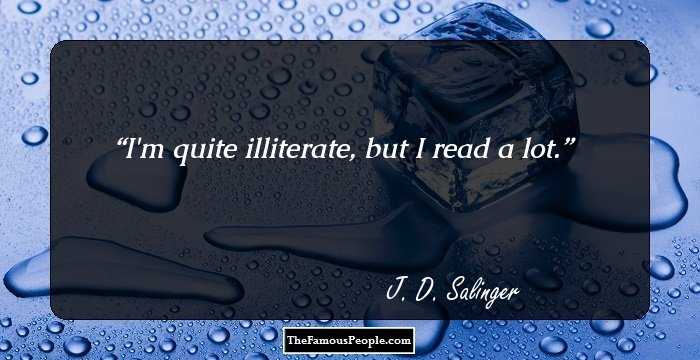 Quotes: I
Major Works
J.D. Salinger is best known for his 1951 novel, 'The Catcher in the Rye', which talks about the complexities of adolescence. More than 65 million copies of the book have been purchased since its release. It is considered by ‘Time’ magazine, ‘Modern Library’ publishing house, and the ‘BBC’, as one of the best English novels published in the 20th century.
Personal Life & Legacy
This famous author was dating playwright Eugene O'Neill's daughter, Oona, in 1941. However, she soon ended their affair by marrying the legendary Charlie Chaplin.
In 1945, Jerome got married to Sylvia Welter, a German lady, in a small town called Pappenheim, Germany, when he was in the country for army service. However, the couple got divorced within eight months of marriage, amidst rumours that she was a war informant for her country.
Continue Reading Below
In the late 1940s, this writer was drawn towards a sect of Buddhism known as 'Zen'.
In 1949, a screen adaptation of Jerome's story 'Uncle Wiggily in Connecticut' was released. The film, titled 'My Foolish Heart', was made by Polish director Samuel Goldwyn, who had bought the rights from the author, but the movie was a flop.
Salinger got married once again, this time in 1955, to Claire, the daughter of art critic, R. Langton Douglas. She was asked by her husband to quit 'Radcliffe College', and stay at home instead. The couple were married for a period of twelve years, during which they had two children, Margaret, and Matthew.
In 1972, the famous writer began an affair with a student of 'Yale University', Joyce Maynard, who was thirty five years younger. The relationship lasted only a few months and was kept under the covers, but this affair was publicized by Maynard later, in her book titled, 'At Home in the World'.
This writer, who was wary of too much public attention, gave his last interview in 1980, for the newspaper, 'The Baton Rouge Advocate', to reporter Betty Eppes.
In 1986, Jerome refused to allow writer Ian Hamilton to publish a biography titled 'In Search of J.D. Salinger'. The book was supposed to use letters written by the former, and this meant a breach of privacy.
During the same decade, he was dating actress Elaine Joyce, before he got married in 1988 to a nurse named Colleen, who was forty years younger than the writer.
Dariush Mehrjui, a filmmaker from Iran, directed a movie, 'Pari', based on the writer's famous book, 'Franny and Zooey'. Though, he did not need to purchase the rights to the book in Iran, Salinger did not allow Mehrjui to screen his movie in New York City's 'Lincoln Center'.
In 2000, this exceptional writer’s daughter, Margaret published a memoir, titled ‘Dream Catcher’, owing to which, the latter’s relationship with her father suffered.
In 2009, the writer filed a lawsuit against writer, John David California, who was about to publish a sequel, '60 Years Later: Coming through the Rye' to Jerome's 'The Catcher in the Rye'.
The prolific writer died a natural death on January 27, 2010, in New Hampshire, United States.
‘Salinger’ is biography by American writers Shane Salerno and David Shields, which was published in 2013. Salerno also made a documentary film that went by the same name, which was telecast in the ‘American Masters’ television show. 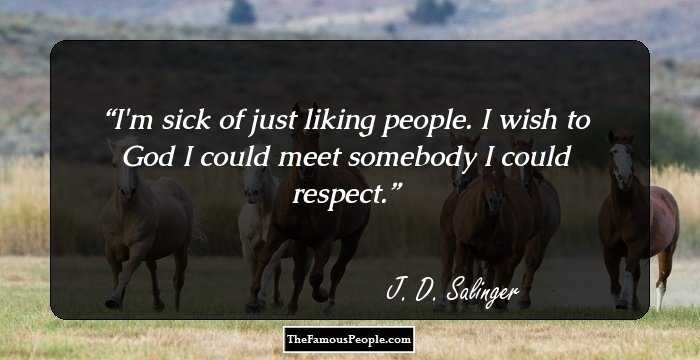 Quotes: God, I
Trivia
This famous American author's masterpiece is supposed to be the inspiration behind murders committed by several assassins, including, Mark David Chapman, who killed English singer, John Lennon.

See the events in life of J. D. Salinger in Chronological Order