Jayden Bartels is best known as a dancer who not only performed on stage on multiple occasions, but also appeared on television shows like Dance Moms and Dance-Off Juniors. She is also a singer, an actress and a model. She has been a model for LA Models for some time. As a dancer, she has been part of The Movement Talent Agency and Millennium Dance Crew. She has acted on a number of TV commercials for El Monterey, Tide, Toys-R-Us, Pizza Hut, etc. In 2015, she appeared on two episodes of the WebTV series, Clique Wars. Jayden has performed on stage in productions of many musical dramas like ‘Little Mermaid’, ‘Newsies’, ‘Mary Poppins’, ‘Alice in Wonderland’ and ‘Little Shop of Horrors’. In March 2016, Jayden auditioned to be a part of the Purpose Tour Children, Washington DC. She was selected for the tour and performed on stage with Justin Bieber, dancing to "What About The Children", and uploaded a video on her YouTube channel on May 1, 2016. American People
Female Musically Stars
Female Social Media Stars
American Musical.ly Stars
American Social Media Stars
The Meteoric Rise To Stardom
Jayden Bartels has been dancing since she was a child. She is a member of a competitive dance team and performs in a variety of styles including ballet, jazz, tap, lyrical, hip-hop, and contemporary. As a singer, she performed with a singing group for several years, and would often get solo performances at each venue. She has acted in many commercials before appearing on TV shows. Even though she appeared on television for the first time on the WebTV series ‘Clique Wars’, she rose to fame after she took part in dance shows like ‘Dance Moms’ and ‘Dance-Off Juniors’. She appeared as a guest on Lifetime's popular dance reality show ‘Dance Moms’ in the sixth season of the show in the episode ‘Float Like a Butterfly, Sting Like Ab-bee’, which aired on November 1, 2016. She was cast as the main character of the 2016 USC thesis film, ‘When Pigs Fly’, a short film about never outgrowing one's imagination, written and directed by Andrew Wood.
Recommended Lists:

Famous Beautiful Women With Green Eyes
Continue Reading Below
What Makes Jayden Bartels So Special
Jayden Bartels loves to perform in front of an audience. She loves to sing, dance and act. She has acted in many musical plays. She has performed for Ovation Theater Group and Summer Art Academy. She is a talented singer and has released cover versions of many popular songs with music videos that show off her dancing skill also. On May 11, 2016, she posted a music video of a cover version of the Meghan Trainor song "NO". The video has her as the lead dancer, with two girls and two boys acting as supporting dancers. On June 30, she released another music video in which she sang a cover version of Laura Marano's song "Boombox". On Aug 5, 2016, Jayden covered the song "Sit Still, Look Pretty" by Daya in a music video which was released by DreamWorksTV. On August 20, 2016 Jayden posted on Instagram the trailer of ‘The Swan Princess: Princess Tomorrow, Pirate Today’ to let people know that she has done the voiceover for the main character Alise. She is also a social media star who is active on Instagram, Twitter, YouTube and TikTok. Her YouTube channel contains videos of her dancing classes, performances, auditions, music videos and vlogs. She has gained immense popularity on the lip syncing app TikTok. Following her friends, she started using the platform when she was 10 years old. She has more than 900,000 fans on her TikTok account.

Beyond Fame
Jayden Bartels has many acting roles lined up for the next year. On March 1, 2017, she will be seen in the episode "Lost Souls" of the second season of the TV series ‘Criminal Minds: Beyond Borders’. She will appear in an episode of ‘It's Always Sunny in Philadelphia’ in 2017. Next year, she will also make a guest appearance on ‘Nicky, Ricky, Dicky & Dawn’ in the episode "Ye Olde Hand Holde" as Olivia.

Behind The Curtains
Jayden Bartels was born on November 1, 2004. She lives in California with her mother and her father. Her mother manages her social media accounts and sometimes shoots her videos. Her father often shoots her TikTok (earlier known as Musical.ly) videos and can be seen in many videos dancing with her in a series on YouTube named ‘Dancing With My Dad’. She has two much older brothers who are in their 20s. Answering to fan questions on a live stream, she mentioned that she goes to a regular school and is not homeschooled. She is in the sixth grade. Jayden took piano classes for two years. She is interested in gymnastics and does a bit of tumbling, though she is not a full on gymnast. She has also played soccer for two years.
Trivia
Jayden's favorite shirt is the one she wore while dancing on stage with Justin Bieber. 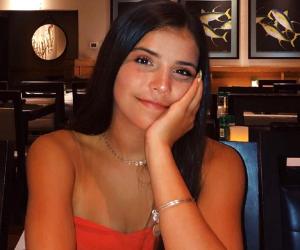