Advanced Search
Javier Bardem is a Spanish actor. He is one of the most recognized actors in world cinema, thanks to his exemplary body of work in the Spanish and English film industry. Javier Bardem hails from an influential family of film personalities; his mother and grandparents were actors, while his uncle was a renowned screenwriter and director in Spain. Initially, Javier Bardem wanted to be a painter. However, he later changed his mind and decided to become an actor. When he started acting, his life turned around and he went on to become one of the most recognized actors even before making his Hollywood debut. ‘Jamon Jamon’ is one of his earlier Spanish films that turned him into an international star. But his inability to speak English kept him from making his English-language debut early on in his career. Bardem learned English and then started appearing in English language films. Subsequently, he became the first Spanish actor to receive an ‘Oscar’ nomination for ‘Best Actor’ for his performance in the American biographical romantic drama film ‘Before Night Falls.’ His performance in the 2007 film ‘No Country for Old Men’ is regarded as the most important work of his career. Javi Luna
DID WE MISS SOMEONE?
CLICK HERE AND TELL US
WE'LL MAKE SURE
THEY'RE HERE A.S.A.P
Quick Facts

Spanish People
Spanish Men
Pisces Actors
Spanish Actors
Actors Who Are In Their 50s
Childhood & Early Life
Javier Bardem was born Javier Angel Encinas Bardem on 1 March 1969, in the city of Las Palmas de Gran Canaria in the Canary Islands of Spain, to Jose Carlos Encinas Doussinague and Pilar Bardem. His father was a businessman, while his mother is an actress.
Due to his family’s association with the Spanish film industry for many generations, Bardem grew up among those associated with films. In spite of having an interest in films, he wanted to become a painter. He was only six years old when he appeared in his first film ‘El Picaro.’
Bardem studied at ‘Escuela de Artes y Oficios’ in order to get trained as a painter. In fact, he did start off as a painter, but did not find the kind of success he was hoping for. When he struggled with his finances, he started taking up acting jobs. In 1989, he appeared on the TV show ‘The Day Ahead’ on Spanish television. Subsequently, he decided to give up on his painting career. 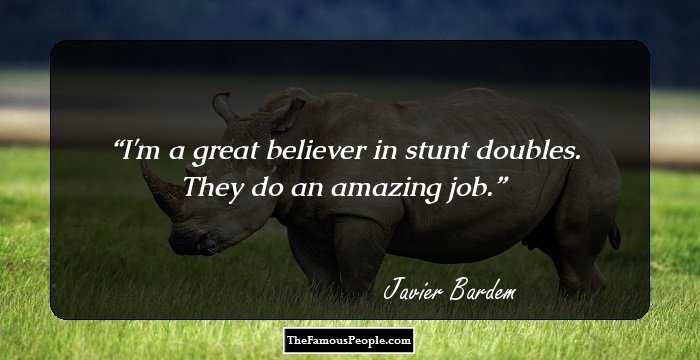 Continue Reading Below
Career
When Bardem was 20 years old, he appeared in a film titled ‘The Ages of Lulu.’ His performance in the film earned him a role in the film ‘Jamon Jamon,’ which released in 1992. ‘Jamon Jamon’ was a major success and Bardem became popular for his acting skills. The following year, he also starred in the film ‘Golden Balls.’
Bardem’s work in Spanish cinema was noticed by Hollywood and English-language filmmakers. When he received opportunities to act in English-language films, he had to turn down the offers as his English was not up to the mark. After taking English lessons, he starred in the film ‘Perdita Durango’ in 1997. In the ensuing years, he continued to work in Spanish films.
Javier Bardem was cast to play the lead role of ‘Reinaldo Arenas’ in the biographical film ‘Before Night Falls’ which released in the year 2000. His performance was praised by the critics and fellow actors alike. The film turned out to be his big breakthrough as he received an ‘Academy Award’ nomination for ‘Best Actor.’ Two years later, he starred in the film ‘The Dancer Upstairs’ in which he played the role of a detective.
Javier Bardem’s next project was the Spanish film ‘Mar Adentro’ in 2004. The film was released in the United States under the title ‘The Sea Inside’ and the actor’s performance as a euthanasia activist brought him plenty of accolades. The same year, Bardem was also cast to play the role of a gangster in the film ‘Collateral.’
2007 turned out to be an important year in Javier Bardem’s career as he starred in films like ‘No Country for Old Men’ and ‘Love in the Time of Cholera.’ Bardem’s portrayal of ‘Anton Chigurh’ in ‘No Country for Old Men’ was widely appreciated and earned him worldwide recognition. ‘Anton Chigurh’ has been widely regarded as one of the most iconic villains of Hollywood.
In 2008, Bardem starred alongside Penelope Cruz and Scarlett Johansson in Woody Allen’s ‘Vicky Cristina Barcelona.’ Bardem’s next big project was the Spanish film ‘Biutiful.’ His performance in the film was widely appreciated. It also earned him a ‘Best Actor’ nomination at the ‘Academy Awards,’ making him the first actor to be nominated for the award in spite of delivering an entirely Spanish-language performance.
In 2012, Javier Bardem was cast as the main antagonist in the Bond film ‘Skyfall’ and his performance was well received by critics and audiences alike. He followed it up with his impressive performance in the film ‘Sons of the Clouds: The Last Colony.’
From 2013 to 2016, he was seen in a number of movies, including ‘The Counselor,’ ‘Autómata,’ ‘The Gunman,’ and ‘The Last Face.’
In 2017, he portrayed the main antagonist in the fifth installment of the ‘Pirates of the Caribbean’ movie series ‘Pirates of the Caribbean: Dead Men Tell No Tales.’ The same year, he was also seen alongside Jennifer Lawrence and Michelle Pfeiffer in the horror movie ‘Mother!’
He was appreciated for his role in the 2018 Spanish movie ‘Todos lo saben.’ The following year, he was cast to play 'Stilgar' in Denis Villeneuve's epic science fiction film ‘Dune,’ which is slated for release in December 2020. In 2020, he was also seen playing 'Leo' in Sally Potter's British-American drama film ‘The Roads Not Taken.’ 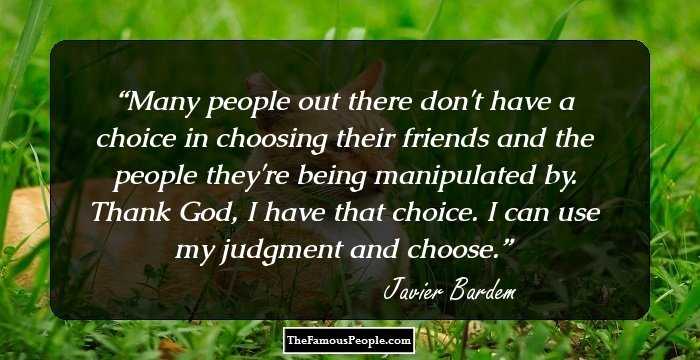 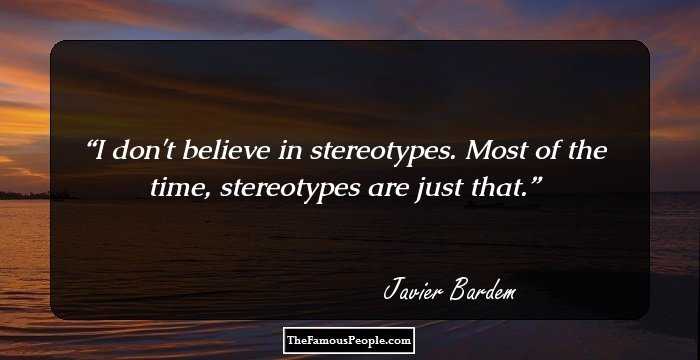 Quotes: Time, Believe
Personal Life & Legacy
Javier Bardem got married to Penelope Cruz in the year 2010 after three years of courtship. They have a son and a daughter.

Quotes By Javier Bardem | Quote Of The Day | Top 100 Quotes

See the events in life of Javier Bardem in Chronological Order