Ask a movie buff what is common between the films, ‘Open Your Eyes’, ‘The Girl of Your Dreams’, ‘Vanilla Sky’ and ‘Blow’ and without a second to spare, out would come the reply, Penelope Cruz! A truly charismatic Spanish actor of substance, Penelope Cruz cruised her way to the big screen with her exceptional talent, captivating appeal and skilled approach. Right from a young age, she indulged in re-enacting actors which built the foundation to take up acting as a career option. However, en-route pursuing her dreams, she faced a lot of rejections initially but did not lose her vision of becoming a top actress. Resultantly, all her hard work, willpower and determination paid off when she was cast in the movie, ‘Jamon, Jamon’ in 1992. Her artistic talent was recognized as she earned nominations for Best Newcomer and Best Actress in her debut year in Goya Award, Spain’s equivalent of Oscars. Thus, started a career that was destined for greater glories! After making her presence felt at the Spanish movie circles, she moved to Hollywood to make her mark at the world forum. She earned critical acclaim and recognition for her work and became the first Spanish actress to be conferred upon with an Academy Award and a star at the Hollywood Walk of Fame. In the following lines, we have provided detailed sketch of her life, childhood and profile. Read on. Ester Expósito
Actresses #39
Film & Theater Personalities #100
DID WE MISS SOMEONE?
CLICK HERE AND TELL US
WE'LL MAKE SURE
THEY'RE HERE A.S.A.P
Quick Facts

Penelope Cruz Sanchez was the oldest of the three children born to Encarna Sánchez and Eduardo Cruz. While her mother was a hairdresser and personal manager, her father was a retailer and auto mechanic.

Raised as a Roman Catholic, young Cruz, she spent much of her childhood at her grandmother’s apartment. Often she indulged in playing acting games and re-enacting the commercials that left her friends and parents amused.
As a child, she was interested in dancing and also attained training in the same. For nine years, she took lessons in classical ballet at Spain’s National Conservatory. The dance lessons instilled in her focus, determination and discipline which came in handy in future.

Her tryst with cinema started when she was ten. Her father brought home a Betamax machine on which the family watched movies together. The movie ‘Tie Me Up! Tie Me Down!’ by Spanish director Pedro Almodóvar, inspired her to take up acting professionally. 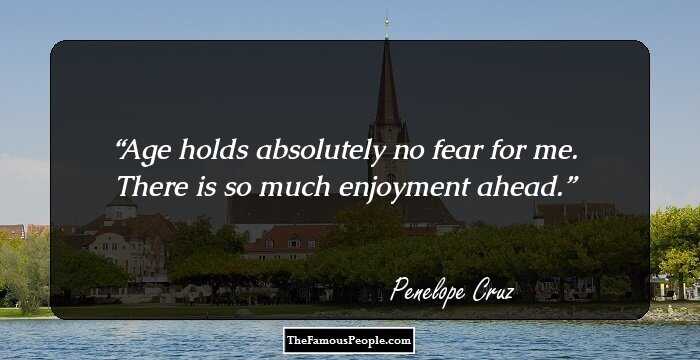 The Most Popular US Veterans
Career
Her entry into the world of cinema wasn’t a rosy one as she faced rejection a number of times. However, not the one to give up, she persistently continued with her endeavour to bag herself a role.
In 1989, she auditioned at a talent agency. With more than 300 girls eyeing for the role, she came out victorious, impressing the judges with her oozing fresh talent, unmatched sense of presence and remarkable acting skills.

She made her big screen debut with the feature film, ‘Jamon, Jamon’ in 1992. She played the role of the female protagonist, Silvia. The film met with favourable response. She was as much appreciated for her talent as for her daring nudity in the film, which made her a major sex symbol overnight.
Her next release was lined up for the same year titled, ‘Belle Epoque’. This Academy Award winning movie had her playing the character of virginal Luz with complete perfection.
With as little as two movies old, it was too early to tag her as a successful artist but given her power packed performances and skilled approach; she seemed to be destined for the riches and the glory. Staying true to the prophecy, she gave one hit after the other and no sooner than in 1996, established herself as a successful Spanish and Italian films actor.
In 1997, she worked for internationally renowned director Pedro Almodovar for his film, ‘Carne Tremula’. Her portrayal of the character of Isabel Plaza Caballero earned her critical recognition globally and set the stage for many more films from the Almodovar camp to come her way.
Her other offerings for the year 1997 include: ‘Love Can Seriously Damage Your Health’, ‘Live Flesh’ and ‘Open Your Eyes’. Following year, she was cast in Stephen Frears' western film, ‘The Hi-Lo Country’ which was a major dud at the box office.
In 1998, she was seen in films like, ‘Don Juan’ and ‘The Girl of Your Dreams’. The latter film earned her immense critical and commercial recognition for her portrayal of the character of Macrena Granada with complete perfection.
Continue Reading Below

In 1999, she was seen in ‘All About My Mother’, a film directed by Peter Almodóvar.

Meanwhile, in between doing Spanish films, she learned ballet and English language to equip herself with the language.
At the age of 25, she decided to move to Hollywood. Being on top of her career she didn’t have much trouble in getting the work. ‘Woman on Top’ was her first Hollywood offering, in which she was cast as Isabelle, a world-class chef suffering from motion sickness. Same year, she played the romantic lead in Billy Bob Thornton's ‘All the Pretty Horses’. Both films were well received.
The string of successful films made her resume quite extraordinarily extravagant but the high point still remained elusive. Year 2001 filled up for the same with the release of Cameron Crowe's ‘Vanilla Sky’, an interpretation of the Spanish film ‘Open Your Eyes’. The film was a major box office blockbuster, helping her garner her first crossover success.
Taking the success story of ‘Vanilla Sky’ further, she was paired opposite acting genius and stalwart, Johnny Depp in ‘Blow’. The film despite receiving mixed reviews from the public, made a whopping $80 million at the box office worldwide.
She could not take the legacy of back to back super successful films any further as her subsequent releases, ‘Don't Tempt Me’ and ‘Captain Corelli's Mandolin’ garnered negative response. Nevertheless, the latter managed to keep the box office ticking by making $62 million worldwide.
Years 2002 to 2004 were difficult years for her career, as none of her movies seemed to work. Starting from ‘Waking Up in Reno’ to ‘Gothika’, ‘Fanfan la Tulipe’, ‘Noel’ and ‘Head in the Clouds’ (2004), each of them proved to be a failure. The only saving grace was Sergio Castellitto's melodrama ‘Don't Move’.

In 2006, she was cast alongside Salma Hayek in the western comedy film, ‘Bandidas’. Following this, she was seen in ‘Volver’, a film from the Almodóvar's camp. For the same she received numerous awards and recognitions.

In 2007, she starred in Woody Allen's ‘Vicky Cristina Barcelona’. She played the character of María Elena, a mentally unstable woman, with absolute perfection, thus garnering positive reviews from critics and audiences. She also bagged an Academy Award in the category of Best Supporting Actress.

Continue Reading Below
In 2010, she made a cameo appearance in the film, ‘Sex and the City 2’ which was a sequel of the 2008 film, ‘Sex and the City’. Following year, she was a part of the cast for the fourth offering from the Pirates of the Caribbean film series.
Her latest releases include, Woody Allen's 2012 film ‘To Rome with Love’ and ‘A Matador's Mistress’ released on demand via cable, satellite, telco and online. She is said to be working with Sergio Castellitto in his war tale, ‘Venuto al Mondo’. 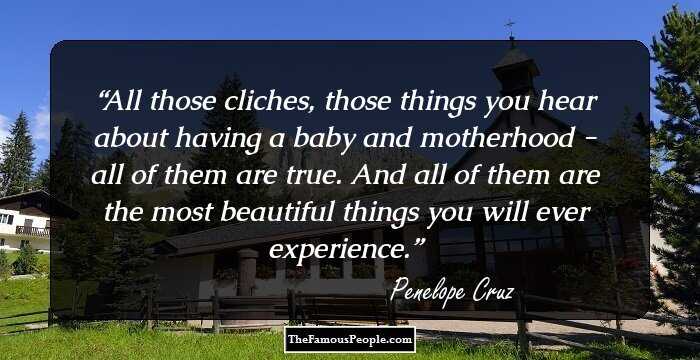 Quotes: Beautiful
Major Works
‘Vanilla Sky’ marks the highpoint in her career graph. Cast opposite Tom Cruise, the film was very well received at the box office and earned a whopping $200 million worldwide. It went on to become her highest grossing film till date.
Awards & Achievements
She won the Empire Award for Best Actress for her role in Volver in 2006.
In 2008, she was presented with the highly esteemed Academy Award and BAFTA Award in the category of Best Supporting Actress for her portrayal of the character of Maria Elena in ‘Vicky Cristina Barcelona’.
In 2011, she was presented star on the Hollywood Walk of Fame. With this, she became the first ever Spanish actress to be conferred with the prestigious Star. 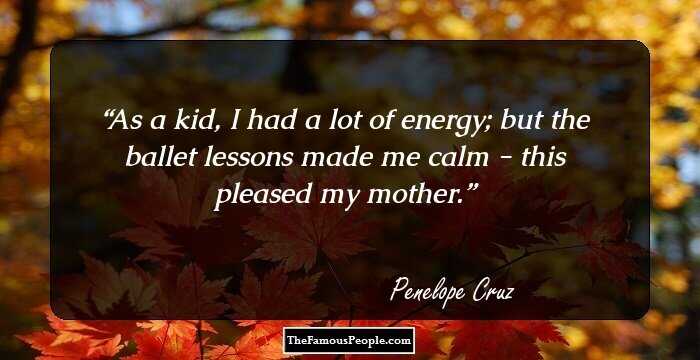 Personal Life & Legacy
She was in a romantic relationship with ‘Vanilla Sky’ co-star, Tom Cruise for three years, from 2001. However, the two separated ways in 2004.
She began dating ‘Vicky Cristina Barcelona’ co-star Javier Bardem in 2007. The two tied the nuptial knot in 2010. The couple has been blessed with two children, Leonardo and Luna.

She is close friends with Spanish director Pedro Almodóvar. Acting apart, she owns a clothing line.

Quotes By Penelope Cruz | Quote Of The Day | Top 100 Quotes

See the events in life of Penelope Cruz in Chronological Order