Janice Doreen Dickinson was brought up in a small household in Hollywood. She suffered a tragic childhood at the hands of her pedophile father but soon liberated herself when she moved out to New York to fulfill her ambition to become a supermodel. Initially she was rejected by everyone in America due to her ethnic looks but that did not stop Dickinson to make a name for herself in France where her exotic looks were admired. Rest of her modeling career bloomed in the States and she became the number one choice for brand names like Versace, Oscar de la Renta, Valentino, Calvin Klein, Harper;s Bazar, Vogue, Elle, Revlon, Christian Dior, etc. She was known to be a wild party girl and on many occasions was connected to many known celebrities, like: Sylvester Stallone, Bruce Willis, Jack Nicholson, etc. In recent years she has appeared on numerous reality television shows, like: ‘America’s Top Model’, ‘Top Models’, ‘I’m a Celebrity…Get Me Out of here’, ‘The Surreal’, ‘Come Dime With Me’, etc. She is also a renowned author and has written many famous books on her experiences in the fashion world and her rendezvous with many lovers. Kris Jenner
DID WE MISS SOMEONE?
CLICK HERE AND TELL US
WE'LL MAKE SURE
THEY'RE HERE A.S.A.P
Quick Facts

American People
Reality TV Personalities
American Women
Female Models
Aquarius Models
Childhood & Early Life
Janice was born on 15 February 1955 in the Brooklyn borough, New York to Jennie Marie, her mother of the Polish descent and Ray Dickinson, her father of the Scottish decent. She has two more siblings, Alexis and Debbie. Alexis is a real estate agent and Debbie is a model.
She had a tough childhood and teenage years as her father used to physically and emotionally abuse her. He also used to sexually abuse one of her sisters. She has mentioned publically that she did not consent to have sex with her father; therefore he used to verbally and physically abuse her and told her that she looked like a boy. 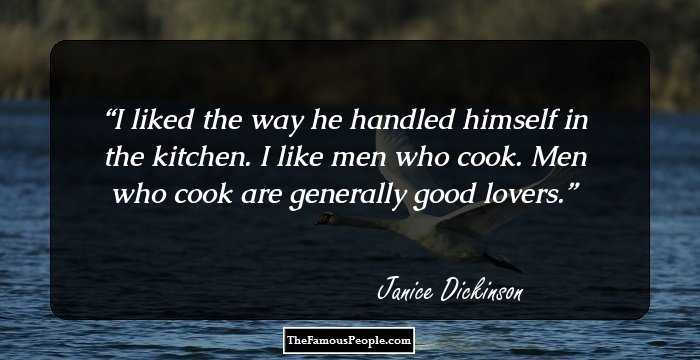 Quotes: Like, I
Continue Reading Below
Career
During 1970s, Dickinson moved to New York. She wanted to pursue modeling, an ambition triggered after she won the national competition ‘Miss High Fashion Model’. But the modeling scene was grim in New York because only blue-eyed blondes, conventionally beautiful women were considered for modeling.
She faced numerous failures and was turned down by the ace modeling agents from New York like Eileen Ford, because everyone thought that her looks were too ethnic for modeling in America. Fashion photographer Jacques Silberstein’s discovered her after his girlfriend and actress Lorraine Bracco liked Dickinson’s looks.
From there on, Dickinson started seeing hope for herself and Wihelmina became her first ever modeling agent. Thereafter she decided to move to Paris as she thought her exotic looks would be considered as an edge in the European fashion industry, unlike in America where it was considered as a hindrance to her modeling success.
In 1978, Dickinson came back to New York after her modeling expedition in France. She worked as a model in New York for years and earned a steady salary of 2000 US dollars every day, which was four times what a standard model was getting in those days.
During late 70s and early 80s, Dickinson was signed with Ford Models to model for the ad campaign for their newly launched JVC camera. She was one of the 20 Ford models to join up John Casablanca’s Elite Model Management.
In the 1980s, people started to recognize Dickinson after she was regarded as a supermodel. It was claimed that she had the kind of face and body that women covet in the modeling industry. This was time when she started to appear on the covers of popular magazines like: Playboy, Vogue, Marie Claire, Elegance, Harper’s Bazar, Photo, Cosmopolitan, etc. She appeared as the cover model for vogue 37 times and 7 times for Elle magazine.
She started working and modeling for the best names in the fashion industry like: Calvin Klein, Oscar de la Renta, Valentino, Bill Blass, Versace, Azzendine Alaia, Pino Lancetti, etc. She was also the model for products like: Max Factor, Christian Dior, Revlon, Lou Taylor handbags, Keiko swimwear, Clairol, Balmain, Obao, Virginia Slims, Cutex, Orbit gum, Jenny, Hush Puppies, Alberto VO5, etc.
In 2003, Dickinson came back to media’s attention after a very long time. She appeared on the reality television series ‘America’s Top Model’ as a judge on the show. It was the producer of the show Tyra Banks who hired her after reading one of her books, thinking that she will be able to advise the young models on how to conduct themselves and what is expected out of them in the fashion industry.
In 2005, Dickinson appeared on ‘The Surreal Life’ as one of the cast members, at its 5th series. In 2006, Dickinson made her own reality television show called ‘The Janice Dickinson Modeling Agency’. It was aired on the Oxygen Cable-television channel for four good seasons. This series established Dickinson as a modeling agent.
Continue Reading Below
In 2007, she made an appearance in an English reality television series called ‘ Abbey & Janice : Beauty & The Best’, along with the English model Abigail Clancy. It was a show based on Clancy’s effort to get into American modeling scenario and Dickinson’s role was to guide her through it. The show was premiered in Britain in 2007 and American in 2008.
In 2007, Dickinson participated in the UK reality television show called ‘I’m a Celebrity…Get Me Out of Here’. She came out from the show as a runner up. In 2009, she again became a part of the same reality series but in the American version.
In 2009, Dickinson appeared as a guest judge on the Finnish version of the ‘Top Model’ franchise. In 2010, she appeared on the celebrity edition of the famous British reality dinner-party show called ‘Come Dine With Me’. In the same year she became a part of the reality show called ‘Celebrity Rehab with Dr. Drew’. In 2011, she was seen in one of the episodes of 90210. 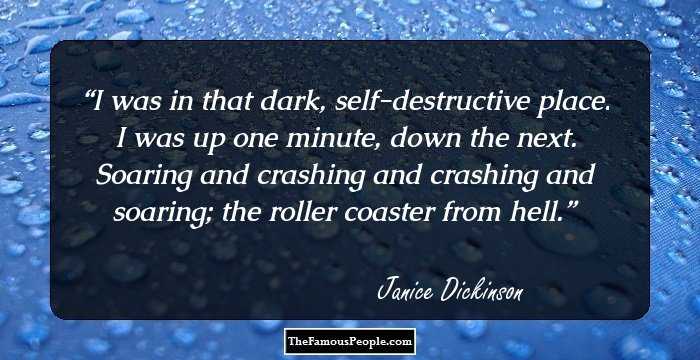 Quotes: I
Personal Life & Legacy
Dickinson has married thrice - Ron Levy, Simon Fields and Albert Gertson are her ex-husbands. She got engaged to be married to a psychiatrist called Dr. Robert Gerner in 2012. She has a son From Simon Fields, Nathan Ray Michael Fields and a daughter Savannah Rodin Dickinson from her boyfriend Michael Birnbaum.
In her books, Dickinson has revealed that she had many lovers from the Fashion industry and Hollywood, like Sylvester Stallone, Jack Nicolson, Liam Neeson, Bruce Willis, John Cusack, Sir Mick Jagger, warren Beatty, Ronnie Wood, Kelly LeBrock, Roman Polanski, Grace Jones, Frank Zappa, David O’Hara, Jon Lovitz, Prince Albert II, etc.
Trivia
This supermodel was first rejected by Ford to be cast as one of their models.
Dickinson is the owner of a jewelry line on HSN.
She has proclaimed herself to be the first ‘supermodel’ ever, which has been disputed by many models and magazines over the years.
She was fired from 'America’s Top Model' by Tyra Banks because of her being doubtful about plus-size models and it became a bone of contention between her and Banks. She was known for her wit and straightforward criticism as a judge on the show.
In the ‘Finnish version’ she got into much talked about controversy when she mixed her sleeping pill with champagne and fell down a flight of stairs and shouted at the models in the show. She had to apologize later to the models.
She is the singer of the song ‘Crazy’, written and produced by Craig Taylor.
She has written books on her experience in the fashion world, like: ‘No Lifeguard on Duty: The Accidental Life of the World’s First Supermodel’, ‘Everything About Me is Fake…And I’m Perfect’ and ‘Check Please! Dating, Mating and Extricating’. 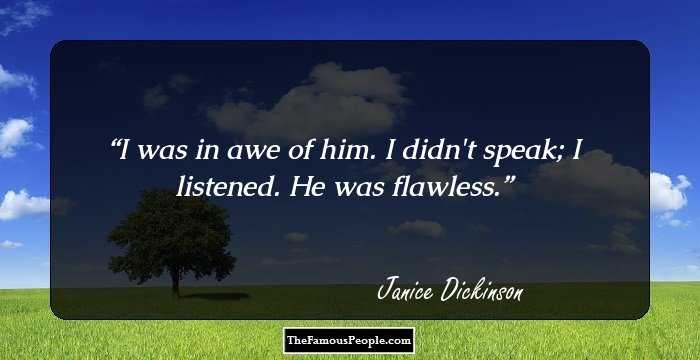 Quotes By Janice Dickinson | Quote Of The Day | Top 100 Quotes

See the events in life of Janice Dickinson in Chronological Order