James Franco is an American actor, director, screenwriter, producer, teacher and author. He developed a keen interest in learning and enrolled in various institutions concentrating mainly in creative writing. However, his main stay remained acting. He debuted in NBC’s television series “Freaks and Geeks” which became a cult classic. His debut film was “Never Been Kissed”. He catapulted to fame with his role in “Spider-Man” as Harry Osborn. He reprised his role in the sequels “Spider-Man 2” and “Spider-Man 3”. He appeared intermittently in the soap opera “General Hospital” as Robert James “Franco” Frank. He won critical acclaim and popularity for his performance in “Pineapple Express”. He received a Golden Globe Award for his performance in the title role of “James Dean”. “Milk” was yet another movie in which his performance won much praise and he was awarded the Independent Spirit Award for Best Supporting Actor. In “127 Hours”, he portrayed real-life mountain climber Aron Ralston, and was nominated for an Academy Award, Golden Globe and SAG award, and won an Independent Spirit Award. He has tried his hands at directing and scripting. He has also written short stories and taught film and English at USC, UCLA, CalArts and NYU. He continues his acting carrier with passion. Ezra Miller
Actors #128
Film & Theater Personalities #288
DID WE MISS SOMEONE?
CLICK HERE AND TELL US
WE'LL MAKE SURE
THEY'RE HERE A.S.A.P
Quick Facts

American People
American Men
California Actors
Columbia University
University Of California, Los Angeles
Childhood & Early Life
James Edward Franco was born on April 19, 1978, to Betsy Lou Verne, a writer and actress from an immigrant Russian Jewish family, and Douglas Eugene Franco, a Silicon Valley businessman of Portuguese and Swedish descent, at Palo Alto, California.
He grew up in California with his two younger brothers, Tom and Dave. He was talented at mathematics, and interned at Lockheed Martin. He graduated from Palo Alto High School in 1996.
As a teenager, he was arrested for offences like underage drinking, graffiti, and selling stolen designer fragrances from department stores to classmates. All these activities and events resulted into his briefly becoming a ward of the state. 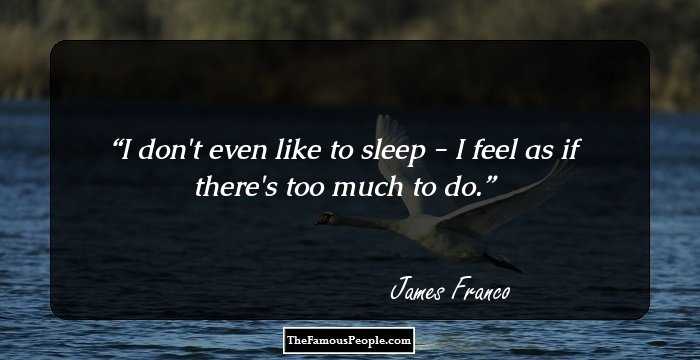 Who Is The Most Popular BTS Member?
Career and Later Life
Franco enrolled at the UCLA to major in English, but dropped out choosing to take acting lessons with Robert Carnegie at the Playhouse West. To support himself, he took a late-night job at McDonald’s.
After 15 months’ training, he began auditioning in Los Angeles. He featured in the television commercial for Pizza Hut. In 1999, he debuted in NBC’s television series “Freaks and Geeks”.
He debuted in films with “Never Been Kissed”. He then played the popular jock Chris in “Whatever It Takes” in 2000, a modern remake of the play “Cyrano de Bergerac”.
He starred in “Sonny” directed by Nicolas Cage in 2002. His played a homeless drug addict in “City by the Sea” co-starring Robert De Niro. He starred in Robert Altman’s ballet movie “The Company”.
He completed training for his Private Pilot Licence for his role in “Flyboys”, which released in 2006. He appeared briefly in the remake of “The Wicker Man”, and made a cameo appearance in “The Holiday”.
Franco re-enrolled at UCLA in 2006 with English as major. He attended Columbia University’s MFA writing program, New York University’s Tisch School of the Arts for filmmaking, and Brooklyn College for fiction writing.
He attended the MFA Program for Writers at North Carolina’s Warren Wilson College for poetry. He is a PhD student in English at Yale University, and also attended the Rhode Island School of Design.
He originated the fictional character of Robert James “Franco” Frank, a multimedia artist, in the ABC soap opera “General Hospital”. He played the role intermittently from 2009 to 2012.
He appeared in the action comedy “Date Night”, in the movie adaptation of “Eat Pray Love”, and as the poet Allen Ginsberg in the drama “Howl” which premiered at the Berlin Film Festival.
Continue Reading Below
In 2010, he acted in Rupert Wyatt’s “Rise of the Planet of the Apes”, starred alongside Winona Ryder in “The Letter” directed by Jay Anania, and as a drug-addicted lawyer in “About Cherry”.
He directed short films such as “The Feast of Stephen” and “Herbert White”, both presented at the Maryland Film Festival in May 2010, and “The Clerk’s Tale”, screened at the Hamptons Film Festival.
Franco has taught at USC, UCLA, CalArts and NYU in Film and English departments. He has also helped attach actors such as Seth MacFarlane, Kate Mara, Natalie Portman, for his students’ film projects.
He started painting while attending the CSSSA. An exhibition of his paintings was held at the Glü Gallery in Los Angeles in 2006. Scribner published “Palo Alto”, a collection of his short stories. 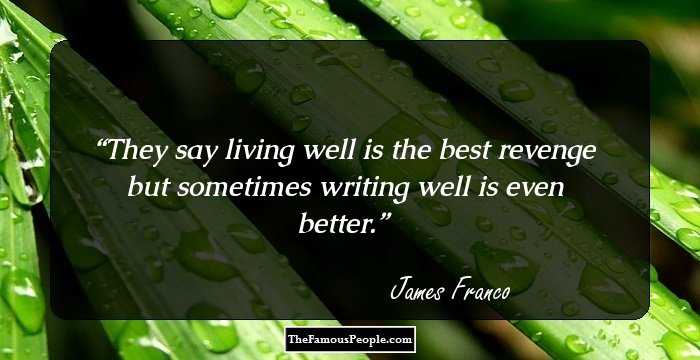 Quotes: Living
Major Works
He was cast in the 2002 superhero film “Spider-Man” as Harry Osborn, the son of the villainous Green Goblin. He reprised his role in the sequels “Spider-Man 2” and “Spider-Man 3”.
Franco wrote, directed and starred in “Good Time Max” about the lives of two brothers one of whom becomes a doctor while the other is unemployed. It premiered at the 2007 Tribeca Film Festival.
He starred in Judd Apatow’s comedy “Pineapple Express” in 2008. He won a Golden Globe nomination for Best Actor in a Musical or Comedy, and High Times magazine’s Stoner of the Year Award.
Awards & Achievements
Franco received a Golden Globe Award and nominations for an Emmy Award and a Screen Actors Guild Award for his performance in the title role in Mark Rydell’s 2001 film “James Dean”.
Franco starred opposite Sean Penn, Josh Brolin, and Emile Hirsch in Gus Van Sant’s 2008 movie “Milk” as Scott Smith, boyfriend of Harvey Milk. He won the Independent Spirit Award for Best Supporting Actor.
In “127 Hours”, directed by Danny Boyle, Franco portrayed real-life mountain climber Aron Ralston. He was nominated for an Academy Award, Golden Globe and SAG award, and won an Independent Spirit Award. 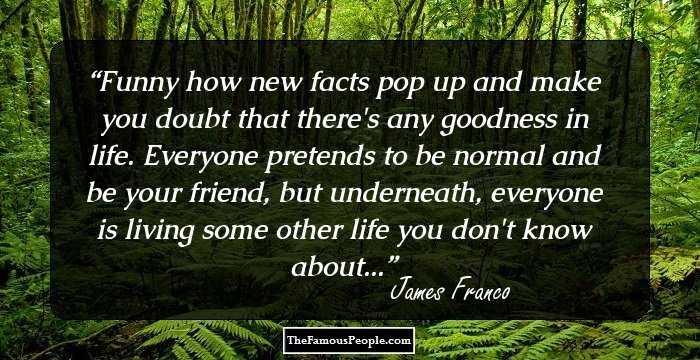 Quotes: You, Life, Living
Personal Life & Legacy
James Franco met actress Maria Sokoloff on the sets of “Whatever It Takes”. They dated for five years. Later, he was in a relationship with Ahna O’Reilly until 2011 when he confirmed their separation.
Trivia
To prepare for the title role of “James Dean”, this actor started smoking two packs of cigarettes a day, dyed his hair blond, learned to ride a motorcycle, play the guitar and the bongos.
This hardworking movie personality prepared for his role in “Annapolis” by training in boxing for eight months. He also practiced horseback riding and sword fighting to play the legendary Tristan in “Tristan & Isolde”.

Quotes By James Franco | Quote Of The Day | Top 100 Quotes

See the events in life of James Franco in Chronological Order