(Actor and Comedian Best Known for His Energetic and Slapstick Performances)

If Jim Carrey, the famous comic actor, had taken a beating after being rejected as a performer the first few times, we would not have had great movies like Bruce Almighty and The Truman Show. Faced with dire poverty in his childhood, this brilliant entertainer was unable to complete school, and was forced to fend for his family. His only form of practice was at home, when he would try cheering up his mother in times of economic calamity. His first performance was at the comedy club of Yuk Yuk's, where he was rebuffed by the audience. This however, did not undermine Jim Carrey's confidence, and he went on to prove to the world, that he had talent. With splendid comic performances in films like Ace Ventura: Pet Detective, The Mask, Dumb and Dumber, Liar Liar, and Me, Myself & Irene, he carved a niche for himself in the live action comedy genre of movies. Gradually, he began acting in more serious movies, bagging prestigious honors for his acts in the films, The Truman Show, Man on the Moon, and How the Grinch Stole Christmas. This celebrated star has been included in the Canadian Walk of Fame for his cinematic achievements. Melissa Womer
DID WE MISS SOMEONE?
CLICK HERE AND TELL US
WE'LL MAKE SURE
THEY'RE HERE A.S.A.P
Quick Facts

Humanitarian Work: Founder of the 'Green Our Vaccines' campaign

James Eugene Carrey, popularly called Jim, was born to Percy and Kathleen, on January 17, 1962, in the town of Newmarket, Canada. He was the youngest of four siblings, the others being Rita, John, and Patricia. Percy, of Canadian-French descent, was a Catholic who was employed as an accountant.

James studied at the Blessed Trinity Catholic School, North York, for a brief period of time, before joining the Agincourt Collegiate Institute. Here too, the young boy studied for only a year, and then went to Northview Heights Secondary School.

Due to financial crisis faced by the family, he was forced to drop out, and help his parents earn a living.

When the family moved to Burlington, Jim Carrey pursued his education from the Aldershot High School. During this time, the teenager showed an interest in performing stand-up comedy acts, often taking time out to entertain his classmates. 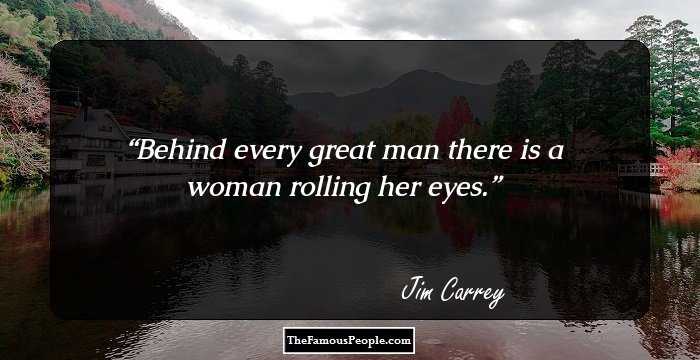 Initially, Jim Carrey began performing at the Yuk Yuk's comedy club in Toronto, where he did not gain much recognition. Once the family's financial crises reduced, he got the time and opportunity to concentrate on his comic act.

He soon began performing regularly on-stage, earning a living in the process. Jim Carrey also aimed at getting employed as an actor in television and movies, and soon appeared for a try-out of Saturday Night Live produced by the National Broadcasting Company (NBC).

He was however rejected for the 1980-81 season of the show, and turned his attention towards Hollywood films. The following year, he featured on An Evening at the Improv, a stand-up comedy show aired on television.

In 1983, the talented entertainer appeared on The Tonight Show, telecast on NBC. He was also signed for two low-budget movies, Rubberface and Copper Mountain.

The next year, he starred in the television serial, The Duck Factory, aired on NBC, in the main role of an artist. Though the sitcom never saw the light of the day, it helped Jim land more roles in Hollywood movies.

During 1985-89, the actor was cast in the horror-comedy movie Once Bitten alongside Lauren Hutton and Karen Kopins. He played supporting characters in movies like The Dead Pool and Peggy Sue Got Married. Around the same time, he also acted with comedian Damon Wayans in the film Earth Girls Are Easy.

It was in 1994 that this brilliant comic actor got his big break in Hollywood, with the film, Ace Ventura: Pet Detective. Though the film did not go down well with most critics, it was a hit with the movie-goers, establishing Jim Carrey as a star.

During the same time, he was also cast in Dumb and Dumber and The Mask. His performances in both the movies were highly appreciated, and he won the nomination for the Golden Globe Award in the Best Actor category for the movie The Mask.

In 1995, Jim Carrey acted as Two-Face and the Riddler in the Michael Keaton starrer Batman Forever. He also featured in Ace Ventura: When Nature Calls, which again was a hit with audiences, though it didn't impress movie critics much.

During 1996-97, Jim was cast in two major roles in the movies The Cable Guy, directed by Ben Stiller, and Liar Liar. Both movies did exceptionally well at the box-office, with Liar Liar becoming a favorite even with critics, and getting him another Golden Globe nomination.

In 1998, he ventured into a more serious genre, starring in the movie The Truman Show. This satire brought critical acclaim to this splendid actor, who finally proved his versatility. He ended up winning the Golden Globe Award in the Best Actor in a Motion Picture Drama category.

His next movie, Man on the Moon, released in 1999, and became a huge critical success. His portrayal of Andy Kaufman brought home his second and successive Golden Globe for Best Actor.

In 2000, Jim Carrey acted in the movie Me, Myself & Irene, which was directed by Farelly Brothers, who had made the actor's earlier hit, Dumb and Dumber. He was also cast in the movie, How the Grinch Stole Christmas, which earned him a Golden Globe nomination for the fifth time.

Three years later, Jim appeared in the movie Bruce Almighty, alongside Morgan Freeman and Jennifer Aniston. Though the movie was not much appreciated by critics, it went on to gross millions at the box-office.

In 2004, this accomplished actor surprised critics and audiences once again with the romantic sci-fi drama, Eternal Sunshine of the Spotless Mind, where he was cast opposite Kate Winslet.

The same year, he also appeared in the dark comedy Lemony Snicket's A Series of Unfortunate Events, which was adapted from a children's book of the same title.

From 2005-07, Jim Carrey starred in several films like Fun with Dick and Jane, a remake of an older movie of the same name, and The Number 23, both of which received mixed reviews.

In 2008, for the first time, this brilliant actor lent his voice to an animated movie, for the character of an elephant in Dr. Seuss' Horton Hears a Who! He also featured along with fellow actors, Bradley Cooper and Zooey Deschanel, in the film Yes Man.

In 2009, the actor was cast in the famous movie, I Love You Phillip Morris, along with Scottish star, Ewan McGregor, receiving positive reviews for his comic timing. The same year, he lent voices to the characters of Ebenezer Scrooge, as well as the three ghosts in the film, Christmas Carol.

During 2011-13, he starred in the movies, Mr. Popper's Penguins, Kick-Ass 2, Dumb and Dumber To, and Burt Wonderstone. Around the same time, he wrote and published the children's book How Roland Rolls. 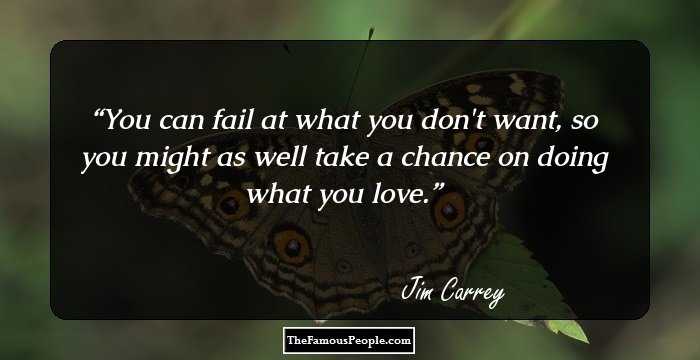 Jim Carrey's 1998 film The Truman Show is considered one of his best acts, where he had tried his hand at satire and drama, along with his usual comic touch. His versatile performance not only earned him fans all across the world, but also gave critics a pleasant surprise.

Bruce Almighty, released in 2003, is considered a classic Jim Carrey movie, where the actor plays the role of a television news anchor with sudden God-like abilities. The film, though not a favorite with critics, earned 484 million dollars, and is still considered one of the best comedy movies of all time.

This famous actor has received several Golden Globe nominations for his brilliant acts in comedy movies. However, it was during 1998-99, when he tried dabbling in serious roles, that he won two Golden Globe Awards for the movies, The Truman Show and Man on the Moon.

In 2004, Jim Carrey was initiated into the Canadian Walk of Fame for his contribution to the field of cinema.

The Maharishi University of Management in Iowa conferred upon this great actor, an honorary doctorate in 2014. 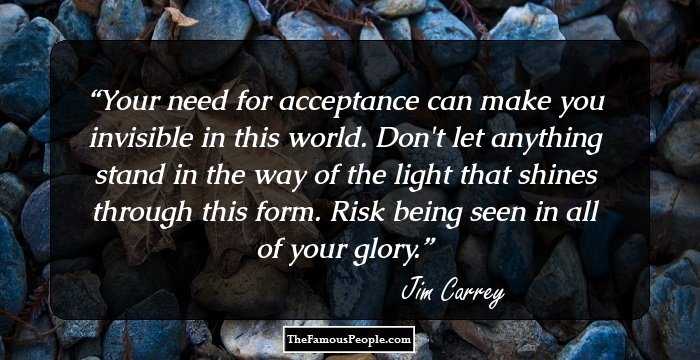 Carrey has been in several relationships throughout his career, initially dating pop musician Linda Ronstadt in 1983 for a brief period of eight months.

In 1987, he got married to actress Melissa Womer, and the couple has a daughter, Jane Erin, who is presently a singer. The two legally separated after eight years of marriage.

Actress Lauren Holly and Jim got married on September 23, 1996, but this marriage too did not last long. Since then, the famous actor has dated Renée Zellweger, Laurie Holden, Anine Bing, January Jones, and Jenny McCarthy. His relationship with actress McCarthy lasted for five years, before the couple publicly announced their split. Between 2012 and 2015, he dated a makeup artist named Cathriona White, who committed suicide in September 2015. In 2019, he started dating Ginger Gonzaga and broke up with her in less than a year.

In 2004, this star became a citizen of the United States, and still retains his nationality in Canada.

He has always advocated against the use of harmful chemicals in vaccinations made for children. For this purpose, he pioneered the Green Our Vaccines campaign, held in Washington D.C.

This famous comic actor claims to have had visions, where he saw himself being paid $10,000,000 for his "Acting services rendered." This came true seven years later, when he got his pay check of the same amount for Dumb and Dumber.

See the events in life of Jim Carrey in Chronological Order