Jennifer Ann McCarthy is an American model, actress, and an anti-vaccine activist. The multi-faceted personality has also worked as a screenwriter and a television show host. McCarthy, who is also known as Jenny Wahlberg, came into the limelight after she started her modeling career with the ‘Playboy’ magazine as one of their nude models. Just a year after joining Playboy, she was named the ‘Playboy Playmate of the Year’ in 1994. Her popularity as a model helped her venture into the film and television industries as well. She became the co-host of the MTV dating game show ‘Singled Out’ and also appeared in films like ‘BASEketball’, ‘Diamonds’, ‘Scream 3’, and ‘Scary Movie 3’. Jenny McCarthy is also well known for her efforts to promote awareness about autism since her own son was diagnosed with the same. She voiced her opinion about vaccines being one of the major causes of autism and kindled controversy. She has also written books on parenting and has discussed matters like ‘alternative medical treatments for autism’ in them. She earned global criticism for being a public figure and blaming vaccines for autism and was labeled ‘a purveyor of anti-vaxxer ideology’. American People
Actresses
American Women
Illinois Actresses
Female Models
Childhood & Early Life
Jennifer Ann McCarthy was born at Little Company of Mary Hospital in Evergreen Park, Illinois, on November 1, 1972 in a working-class Catholic family. Her mother, Linda, was a housewife while her father, Dan McCarthy, worked in a steel mill.
She grew up along with her three sisters, Lynette, Joanne, and Amy. The popular actress Melissa McCarthy is her cousin.
She attended Mother McAuley Liberal Arts High School during her teen years and later became a cheerleader for St. Laurence High School and Brother Rice High School. After completing her schooling, McCarthy enrolled at the Southern Illinois University where she spent two years.
Recommended Lists: 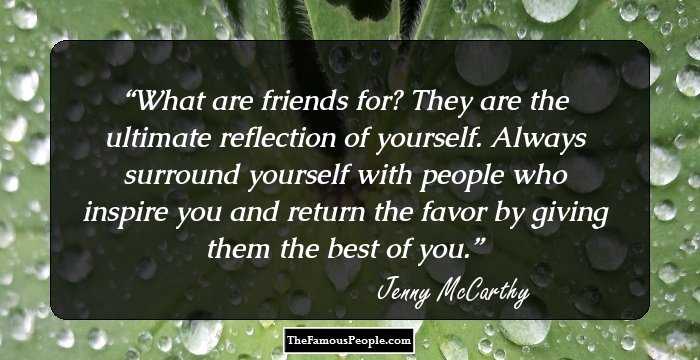 Quotes: You, Yourself, Friends
Continue Reading Below
Modeling Career
Jenny McCarthy began her career as a model when she was offered a sum of US$20,000 by ‘Playboy’ magazine to pose for the publication in 1993. She was chosen from 10,000 applicants to become the Playmate of the Month for October that year.
McCarthy posed wearing her Mother McAuley Liberal Arts High School sweater and Playboy publisher Hugh Hefner acknowledged that her ‘Catholic school girl’ persona set her apart from the others.
The Catholic community in her neighborhood did not appreciate her posing for the ‘Playboy’ magazine and created troubles for her and her family. McCarthy once admitted that her neighbors had thrown eggs at her house and her sisters were abused at their schools.
Owing to her modeling career, some Catholic nuns whom she and her family regarded as close friends, lectured her as well as her close family members about the divine punishment they would face in afterlife.
McCarthy persevered despite the oppositions and proceeded to become a highly successful model. She was offered a US$100,000 contract by ‘Playboy’ magazine and was made the Playmate of the Year in 1994. She later hosted a Playboy TV show ‘Hot Rocks’ that used to telecast uncensored music videos.
McCarthy continued to work with ‘Playboy’ magazine and appeared as their cover girl in 1997 and later in 2005.
Recommended Lists: 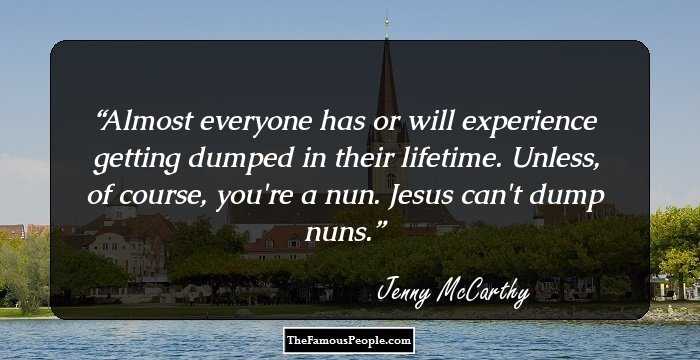 Quotes: Experience, Will
Career in Television & Films
A year after she became the Playboy Playmate of the Year in 1994, Jenny McCarthy was selected to co-host the dating game show ‘Singled Out’ by MTV. She immediately left the show ‘Hot Rocks’ that she was hosting at that time.
Her tenure with the dating show was fairly successful and she attracted more attention from different television shows. She was approached by the World Wrestling Federation (WWF) to appear alongside Shawn Michaels, as his valet, in the pay-per-view event WrestleMania XI. Michaels was due to fight WWF Champion, Kevin Nash, who used to fight under the stage name of Diesel during that period.
McCarthy would again appear in World Wrestling Entertainment (formerly World Wrestling Federation) on August 2, 2008, on a special episode of Saturday Night's Main Event. In that episode she acknowledged the fans for supporting ‘Generation Rescue’, a nonprofit organization that works on issues related to autism.
McCarthy got numerous offers from film producers as well as television show makers. She appeared in the1996 British-Canadian-American adventure comedy film ‘The Stupids’. She also appeared in two episodes of ‘Baywatch’ that year and later appeared as ‘Dani’ in the American sitcom ‘Wings’.
MTV planned to continue with McCarthy for their new shows and hired her for the variety comedy show ‘The Jenny McCarthy Show’. It earned her another American sitcom, ‘Jenny’, from NBC.
She landed a role in the 1998 American sports comedy film ‘BASEketball’. In 1999, she featured in a comedy film titled ‘Diamonds’. She turned down the chance to feature in ‘Scary Movie’ so that she could appear in the third part of the American horror film ‘Scream’ in 2000. Interestingly, she did appear in ‘Scary Movie 3’ later on and parodied her role from the ‘Scream 3’ film.
McCarthy appeared in several television shows in the 2000s. She appeared in ‘Wild Card’, ‘Stacked’, ’What I Like About You’, ‘Tripping the Rift’, and ‘Two and a Half Men’; all of which were comedy shows.
She was signed to host the ‘Saturday Night's Main Event’, a sports entertainment television program, in 2008, and later was signed to replace Elisabeth Hasselbeck as the co-host in ABC’S ‘The View’.
More recently, she presented the talk show ‘The Jenny McCarthy Show’ (2013), and is currently presenting ‘Wahlburgers’ (2014-present) and ‘Donnie Loves Jenny’ (2015-present).
Recommended Lists: 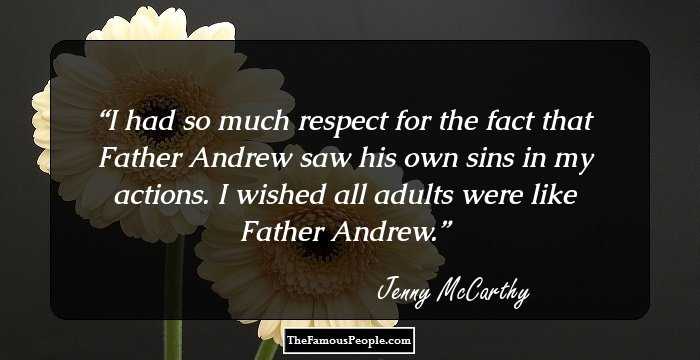 Quotes: Like, I
Activism
Jenny McCarthy’s son Evan was diagnosed with autism and since then she has been working on creating awareness about the condition. She claimed her son’s autism was a result of vaccines. McCarthy became a spokesperson for Talk About Curing Autism (TACA) in 2007 and also became a prominent spokesperson and a member of the Board of Directors for the Generation Rescue foundation.
McCarthy has written several books on parenting and autism in which she openly blamed vaccines for being one of the prime causes of autism. She wrote ‘Louder than Words: A Mother's Journey in Healing Autism’ in 2007. She mentioned in her book that her then-husband John Asher could not deal with their son’s autism which eventually led to their divorce.
Major Works
Jenny McCarthy’s career highlight was her time with the ‘Playboy’ magazine. She gained fame after she became the Playmate of the Month for October 1993 and in 1994, she became the Playboy Playmate of the Year. She earned a $100,000 contract from Playboy and was featured on the cover of the magazine multiple times.
In 2000, McCarthy was offered a role in the horror-comedy/parody film ‘Scream 3’. She appeared alongside the likes of Neve Campbell, David Arquette, Patrick Dempsey, Scott Foley, and Lance Henriksen. The film was a box office hit and earned US$161.8 million.
Personal Life
Jenny McCarthy dated actor John Mallory Asher for several months before marrying him in 1999. They have a son named Evan Joseph Asher (born on May 18, 2002) who was diagnosed with autism in May 2005. McCarthy and Asher ended their marriage with a divorce in September 2005.
McCarthy dated actor Jim Carrey for almost five years. They revealed their relationship on ‘The Ellen DeGeneres Show’ in April 2008. They split up in 2010.
She married actor cum producer Donnie Wahlberg on August 31, 2014, a year after they started dating.

Quotes By Jenny McCarthy | Quote Of The Day | Top 100 Quotes