Advanced Search
James Michener was an acclaimed short story writer and author of his time who was known for his epic and detailed works which were later classified as fictional documentaries. What made him distinct from other writers of his generation was his minute detailing and extensive analysis of everything, right from the geology and flora of the place to the disposition and temperament of people living in it. Coming up with accurate and detailed description of every small and minute detail was the hallmark sign of Michener’s novels. For the same, he often stayed long at a particular country to grasp the local geology, customs and behaviour of the people living in it. In his lifetime, he travelled widely and used his travel experiences to write novels and short stories. Over the years, he came up with 40 books, including texts of five arts books. His work has been translated in every major language of the world and is reported to have recorded sales of 75 million copies worldwide. To know more about his life, childhood, works and timeline, read through the following lines. Quotes By James A. Michener Educators

American Celebrities
Novelists
American Men
Swarthmore College
University Of St Andrews
Childhood & Early Life
Not much is known of James Albert Michener’s early life and his childhood except for the fact that he was raised by an adoptive mother, Mabel Michener as a Quaker in Doylestown, Bucks County, Pennsylvania. He is reported to have been born on February 3, 1907.
Young Michener gained his early education from Doylestown High School from where he graduated in 1925. Thereafter, he enrolled at the Swarthmore College where he indulged in playing basketball.
At the college, he was part of the Phi Delta Theta fraternity. He studied English and psychology at the college. Graduating with the highest honors from the college summa cum laude in 1929, he moved to Europe and studied there for a couple of years. 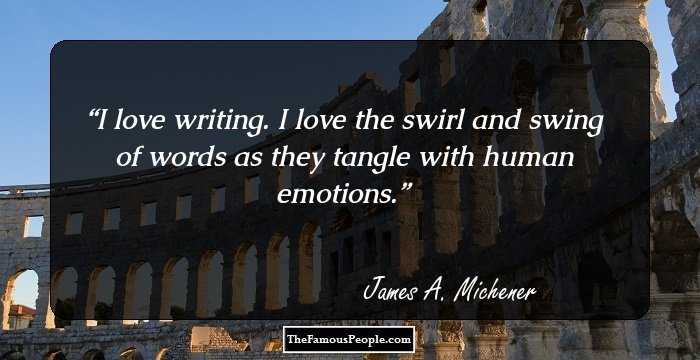 Quotes: Love, I
Continue Reading Below
Career
His first ever vocation was as a high school English teacher at The Hill School in Pottstown, Pennsylvania. He thereafter moved to George School in Newtown Pennsylvania in 1933 and continued with the same profile for three years until 1936.
In 1936, he enrolled at the Colorado State Teachers College to earn his master’s degree. Upon completing his degree, he taught at the university for some time before taking up a teaching position at Harvard for a year from 1939 to 1940. He served as an Assistant Visiting Professor of History at the Harvard
In 1940, he left Harvard to join Macmillan Publishers for the profile of social studies education editor. He could not continue in the position for long as he was called for military service during World War II and was drafted into the United States Navy as a lieutenant.
While serving the US Navy, he was entrusted with the profile of a naval historian that allowed him to travel across the South Pacific Ocean. It were these travels that later formed the base and setting for his novel, ‘Tales of the South Pacific’.
The novel, ‘Tales of the South Pacific’ was published in 1947 to much acceptance and critical acclaim. It later served as the base for the Broadway and film musical, ‘South Pacific’ by Rodgers and Hammerstein. The following year, the book was felicitated with a Pulitzer Prize for Fiction.
Following the grand success of his debut novel, he came out with his second venture, ‘The Fires of Spring’ in 1949, which was an autobiographical work. It was followed by three novels, ‘The Return to Paradise’, ‘The Bridges of Toko-ri’ and ‘Sayonara’.
It was the 1959 released novel, ‘Hawaii’ that gained him instant stardom and made him a best-selling author. The novel was the first of the many more to follow multi-generational historical novels that he became known for.
Meanwhile, apart from writing novels, he tried his hand at television writing but with limited success. It was during these trials that he was approached by television producer Bob Mann who encouraged him to write weekly anthology series of ‘Tales of the South Pacific’.
Unable to secure the television rights of ‘Tales of the South Pacific’ from Rodgers and Hammerstein, he instead concentrated on a different television series by the name, ‘Adventures in Paradise’.
Continue Reading Below
Towards the end of the 1950s he started working as a roving editor for Reader’s Guide to Periodical Literature, a position in which he served until the 1970s. His 1965 released novel, ‘The Source’ was yet again well received and included his trademark speciality of extensive detailing and research.
Other than writing, he devoted a lot of his time to public service as well. In 1960, he served as the chairman of the Bucks County committee which elected John F Kennedy.
Two years later, he ran for the seat of a Democratic candidate in the US House of Representative but was unsuccessful in his attempt. From 1967 to 1968, he served as the secretary of the Pennsylvania Constitutional Convention.
For four years, from 1979 to 1983 he served as a member of the Advisory Council to the National Aeronautics and Space Administration (NASA). He then took up various position which included appointments as cultural ambassador to various countries, the advisory committee of the U.S. Postal Service, and the International Broadcasting Board.
As far as writing is concerned, during the latter half of his life, he shifted focus to American landscapes and concentrated on them in his works. A couple of examples of such included, ‘Centennial’ and ‘Chesapeake’.
‘The Centennial’ was documented into a popular twelve-part television miniseries of the same name and aired on NBC from October 1978 through February 1979.
While the 1980 released novel, ‘The Covenant’ was written with South Africa and apartheid as its backdrop, ‘Space,’ released in 1982, provided a fictional account of the US Space program.
In 1992, he came up with two works; first ‘Mexico’, a fictional take on the on-going problems of the contemporary Mexico and second a memoir by the name, ‘The World Is My Home’. 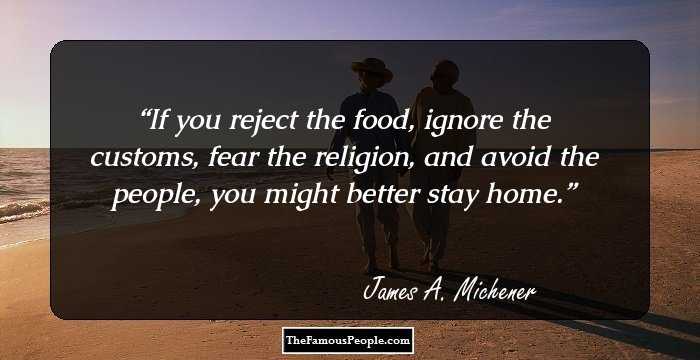 Quotes: You, Home, Fear
Continue Reading Below
Awards & Achievements
He was awarded with a Pulitzer Prize for Fiction in 1948.
He was twice recognized by the National Association of Independent Schools in 1954 and 1958.
In 1967, he won the Einstein Award. Following year, he was presented with the Bestsellers paperback of the Year Award.
In 1970, he was presented with the George Washington Award from the Hungarian Studies Foundation.
In 1977, he was conferred with the prestigious US Presidential Medal of Freedom, the nation’s highest civilian award.
In 1980, he was awarded the Franklin Award for distinguished service from the Printing Industries of Metropolitan New York. Three years later, he was honored by the President’s Committee on the Arts and Humanities for his contribution and support of arts in America.
He won a Lippincott Travelling fellowship from the British Museum and a Distinguished Service Medal from NASA
In 1988, he was conferred with the Golden Badge of Order of Merit.
In 1993, he was presented with the Lone Sailor Award by the U.S. Navy Memorial Foundation for his naval service and his literary achievements.
Continue Reading Below
Personal Life & legacy
He married thrice in his life. First was to Patti Koon in 1935. However, the unison did not work for long and he married his second wife Vange Nord in 1948. His second marriage was annulled in 1955.
Same year, he married his third wife, Mari Yoriko Sabusawa. She died in 1994.
Towards the end of his life, he stayed at the University of Texas in Austin. In October, he put an end to the daily dialysis treatment that had been continuing for four years. Eventually, he breathed his last on the sixteenth of the month due to kidney failure.
He was cremated and his ashes were buried next to his wife at the Austin Memorial Park. Since he did not have any heir, he left much of his estates and his works to Swarthmore College.
Philanthropic and benevolent, he gave up much of his earnings towards charitable works. He is reported to have donated a total of US$100 million.
He donated the royalty earnings from the Canadian edition of his novel ‘Journey’ to initiate the Journey Prize, an annual Canadian literary prize worth $10,000 (Cdn) that is awarded for the year's best short story published by an emerging Canadian writer.
Posthumously, a restaurant at the Iririki Island Resort and a suite at Raffles Hotel Singapore are named after him.
To honor him, the Random House Publishing created an award for the best first novel written by an author over 40-years-old.
In 2008, the US Postal Service honored him with a 59 cent Distinguished Americans series postage stamp.
The library at his alma mater, The University of Northern Colorado in Greeley, Colorado, has been named after him. 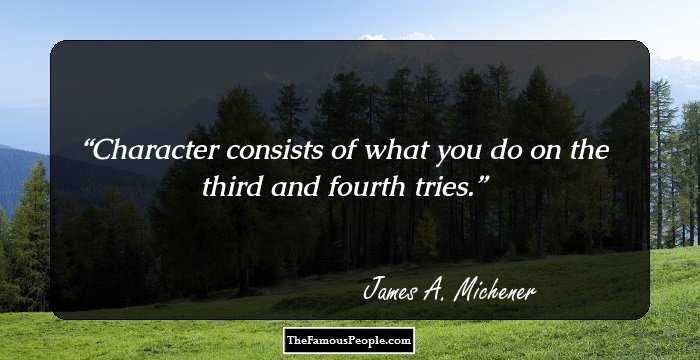 Quotes: You, Character
Trivia
This Pulitzer Prize winning author of the ‘Tales of the South Pacific’ fame is reported to have survived three near fatal plane crashes.
Recommended Lists:
Miscellaneous #1031

See the events in life of James A. Michener in Chronological Order