Jacob Sartorius is an American singer and social media star who became popular by posting comedic videos on Vine and lip-syncing videos on TikTok (which was then known as Musical.ly). He released his first single Sweatshirt in 2016. It was a big hit and Jacob became the he 9th most searched musical artist of 2016. In 2017, he came up with his debut EP The Last Text. Subsequently, he has released three more EPs so far, namely, Left Me Hangin, Better With You and Where Have You Been?. Jacob Sartorius has a big fan following on his social media handles. He has over 9 million followers on Instagram and more than 24 million fans on TikTok. Kaitlyn Maher
DID WE MISS SOMEONE?
CLICK HERE AND TELL US
WE'LL MAKE SURE
THEY'RE HERE A.S.A.P
Quick Facts

Jacob Sartorius was born on October 2, 2002, in Tulsa, Oklahoma. He was given up for adoption as his biological parents were unable to take care of him. He grew up in Reston, Virginia with his adoptive parents. At the age of 7, Jacob Sartorius began acting in musicals, where he discovered his love for performing. His adoptive parents supported him wholeheartedly in his musical endeavours. He has a sister named Caroline who is often featured in his videos.

In 2014, at the age of 11, Jacob Sartorius posted his first video on Vine; it was about anti-bullying. The video went viral and Jacob’s brush with the fame started. Later in 2014, he joined Musical.ly and started posting lip-sync videos on the app. His videos became very popular and he was ranked amongst the top Musical.ly stars in 2016.

Jacob Sartorius’ new found fame had a downside too. He had to face bullying at the school and in 2015, he changed school thrice after getting verbally attacked and teased by his classmates. At this time, social media came offered him an escape and helped him goof off.

After becoming popular on social media Jacob Sartorius signed with T3 Music Group and released his debut single "Sweatshirt" on May 3, 2016. The single was a big hit and it peaked at No. 90 on the US Billboard Hot 100 and No. 81 on Canadian Hot 100. Jacob Sartorius was hailed as the next Justin Bieber. 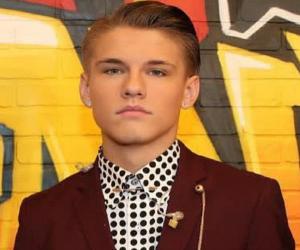