Ichiro Suzuki is an accomplished Japanese professional baseball outfielder who has made his mark in both the ‘Nippon Professional Baseball’ (NPB) in Japan and the ‘Major League Baseball’ (MLB) in the US. Presently a free agent, Ichiro made his ‘NPB’ debut in July 1992 for the ‘Orix BlueWave’ and played for the team for nine seasons. His ‘NPB’ career has witnessed many feats, such as seven consecutive ‘All-Star’ appearances, three ‘Most Valuable Player’ (MVP) awards, seven ‘Golden Glove’ awards, seven ‘Best Nine’ awards, three ‘Matsutaro Shoriki’ awards, and three ‘Japan Professional Sports Grand Prize’ wins. He made his ‘MLB’ debut in April 2001, for the ‘Seattle Mariners,’ and with this, he became the first ever Japanese-born position player signed with an ‘MLB’ team. He played for the ‘Seattle Mariners’ for twelve seasons and thereafter, joined the ‘New York Yankees’ for two and a half seasons. Following this, he joined the ‘Miami Marlins.’ This ace outfielder set several ‘MLB records,’ including 262 hits in a single season, ten consecutive 200-hit seasons, the most number of hits in interleague play, and the most number of hits by a foreign-born player. His ‘MLB’ accomplishments include ten consecutive ‘MLB All-Star’ appearances, the ‘Most Valuable Player (MVP) award, the ‘Rookie of the Year Award,’ ten consecutive ‘Gold Glove’ awards, and three ‘Silver Slugger’ awards among others. His combined major league career, including the ‘NPB’ and the ‘MLB’ has seen him accumulating the most hits that any player in any top-tier professional league has ever achieved in the history of the game. 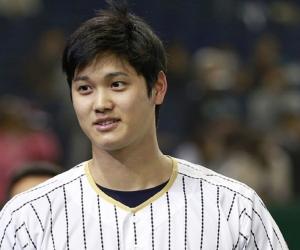 Thurman Munson
Baseball Players #13
Sportspersons #242
Continue Reading Below
DID WE MISS SOMEONE?
CLICK HERE AND TELL US
WE'LL MAKE SURE
THEY'RE HERE A.S.A.P
Quick Facts

Japanese People
Male Sportspersons
Japanese Sportspersons
Japanese Baseball Players
Libra Men
Childhood & Early Life
He was born on October 22, 1973, in Aichi, Japan, to Nobuyuki and Yoshie Suzuki. He became part of a junior baseball team at the age of seven and would often practice with his father. At the age of 12, he was determined to become a professional baseball player, and with this, his training sessions with his dad became more stringent and uncompromising.
He studied at the ‘Aikodai Meiden High School,’ in Nagoya, Japan. The school had a prestigious baseball program. His remarkably strong arm led him to predominantly play as a pitcher, rather than an outfielder, in his high school team. While in high school, he garnered a cumulative batting average of .505 with 19 home runs.
Unfortunately, his small built and light frame overshadowed his impressive high school numbers while being considered by teams. This saw him being drafted only in the fourth and the final round of the November 1991 professional draft.
Continue Reading Below
You May Like

The Sexiest Men Of 2020, Ranked
Career
He made his ‘NPB’ debut with one of the two six-team circuits of the ‘NPB,’ the ‘Pacific League’ (PL), on July 11, 1992, for the ‘Orix BlueWave.’ His first few seasons were mostly spent in the farm system, as Shōzō Doi, the then-manager, disapproved of his unconventional swing that was nicknamed “pendulum.”
With the arrival of the new manager, Akira Ōgi, in 1994, Ichiro got the opportunity to play in the second spot of the line-up every day. He made his first ‘NPB All-Star Game’ appearance that year and continued for the next six years, till 2000.
He garnered 210 hits in a 130-game season, thereby emerging as the first player to top 200 hits in a single season and setting a Japanese single-season record. He also set a new ‘PL’ record with his batting average of .385 that won him the first of his seven consecutive ‘PL’ batting champion titles (1994–2000) in 1994. He garnered the ‘NPB Most Valuable Player’ (MVP) award for three years in a row, starting from 1994.
Eventually, this ace baseball player earned the reputation of being the “Hit Manufacturing Machine.” Other ‘NPB’ accomplishments of Ichiro include seven ‘Golden Glove’ awards (1994–2000), seven ‘Best Nine’ awards (1994–2000), three ‘Matsutaro Shoriki’ awards (1994–1995, 2004), and three ‘Japan Professional Sports Grand Prize’ wins (1994–1995, 2001).
His ‘NPB’ statistics stand at a batting average of .353, 1,278 hits, 118 home runs, 529 runs batted in, 658 runs, and 199 stolen bases. He participated in an exhibition series during the 1996 season, against a visiting team of ‘Major League All-Stars.’ It was during this time that he developed a passion to play in ‘MLB’ in the US.
He participated in a 1998 seven-game exhibition series between the Japanese and the American ’All-Stars,’ where he batted .380 and accumulated seven stolen bases, garnering praise from many ‘MLB’ counterparts.
He finally made his ‘MLB’ debut on April 2, 2001, for the ‘Seattle Mariners,’ after signing a three-year, US$14 million contract with the team. He made a rookie-record of 242 hits, the maximum made by an ‘MLB’ player after 1930. He also became the ‘American League’ (AL) batting champion with batting average of .350. He also became the league’s stolen base leader, with 56 stolen bases in that season.
2001 not only turned out to be an extremely fabulous season for Ichiro but also marked the beginning of the exceptionally thriving career of this star player. That season, he made the first of his ten consecutive ‘MLB All-Star’ appearances (2001-2010) and won the ‘Gold Glove’ award, which he went on to win for the next nine seasons in a row, till 2010. The same season, he also won the ‘MLB MVP’ award, the ‘AL Rookie of the Year’ award, and the first of his three ‘Silver Slugger’ awards.
He was the second player in the history of ‘MLB’ to win have won the ‘MVP’ award and the ‘AL Rookie of the Year’ award in the same season and the only player in the history of major league to have garnered these awards along with the ‘Gold Glove’ and the ‘Silver Slugger’ awards in one season.
Continue Reading Below
During the 2004 season, he broke the 1920 record of George Sisler for the most number of hits (257) in a season, with his 262 hits.
He was part of the Japanese national baseball team that won the ‘World Baseball Classic’ in 2006, defeating Cuba in the finals and thereafter, defeating South Korea in the finals in 2009. In 2006, he was part of the ‘All-World Baseball Classic Team’ and won the first of his three ‘Fielding Bible’ awards (2006, 2009, 2010).
He continued setting new milestones and records and extended his association with the ‘Mariners’ with a five-year contract in July 2007.
He became the second-youngest player, after Ty Cobb, to accumulate 3,000 top-level professional hits on July 29, 2008, encompassing 1,278 hits in Japan and 1,722 in the US.
On September 23, 2010, he became the first ‘MLB’ player to attain the 200-hit mark for 10 seasons in a row.
He was traded to the ‘New York Yankees’ by the ‘Mariners’ on July 23, 2012. He became the ‘AL Player of the Week’ for the week ending September 23 that year. On December 19 that year, his two-year deal for $13 million was finalised with the Yankees.
He signed a one-year, US$ 2 million contract with the ‘Miami Marlins’ on January 23, 2015. Moving further, on October 6 that year, he agreed on a one-year, US$2 million contract with the ‘Marlins’ for the 2016 season.
On July 6, 2017, with a total of 3,054 hits, he surpassed Panamanian ‘MLB’ player Rod Carew to become the all-time leader in hits among foreign-born ‘MLB’ players. His ‘MLB’ record through the 2017 season stands at a batting average of .312, 3,080 hits, 117 home runs, 780 runs batted in, 1,415 runs, and 509 stolen bases.
Personal Life
Since 1996, the ‘Ichiro Cup,’ a boys' league tournament named after Ichiro, is held in his hometown and its surrounding areas. Over 200 teams participate in this six-month event. Ichiro serves as its chairman and remains present at the last game and the awards ceremony every year.
On December 3, 1999, he married Yumiko Fukushima in Santa Monica, California. Yumiko worked as a ‘TBS TV’ announcer. They do not have any children.
His father runs the Ichiro exhibition room named "I-fain" in Toyoyama, since November 2000. This exhibition room displays a varied range of his memorabilia.
Following the 2011 Tōhoku earthquake and tsunami, Ichiro donated ¥100 million (US$1.25 million) to the ‘Japanese Red Cross’ toward disaster recovery efforts.
You May Like

See the events in life of Ichiro Suzuki in Chronological Order