(Journalist, Author and Founder of the Gonzo Journalism Movement)

Hunter Stockton Thompson was an American writer and journalist, who is considered to be the founder of the ‘gonzo journalism’—a style of reporting incidents that involve the narrators to an extent where they become the primary characters of the narrative. Thompson was known to have poetic and literary talents since childhood. He nurtured this interest and took it up as a career later in life. He was also popular for his radical thinking and strong disregard for authority. His writings were described as colourful, witty and often overstated in order to be more appealing. Hunter S Thompson was a supporter of drug legalization and had served on the advisory board of the National Organization for the Reform of Marijuana Laws for thirty years till his death. He also admired firearms and explosives and was known to have had an extensive collection of shotguns, rifles, automatic and semi-automatic machines and other handmade devices. Multiple documentaries and feature have been made on the life of Hunter S Thompson. Lauren Graham
18th July In History
DID WE MISS SOMEONE?
CLICK HERE AND TELL US
WE'LL MAKE SURE
THEY'RE HERE A.S.A.P
Quick Facts

American Celebrities
Novelists
Journalists
American Men
Florida State University
Childhood & Early Life:
Hunter S Thompson was born on 18 July 1937 in Louisville, Kentucky. His father Jack Robert Thompson, a World War 1 veteran, worked as a public insurance adjuster and his mother Virginia Ray Davison was the head librarian at the Louisville public library. Hunter’s father died when Hunter was fourteen years old.
Hunter S Thompson received his school education from the I.N. Bloom Elementary School, Highland Middle School, Atherton High School and finally the Louisville Male High School.
He was inclined towards athletics, and therefore while at the I.N. Bloom Elementary School he co–founded the Hawks Athletic Club. He also got invited to become a member of the Louisville's Castlewood Athletic Club where he performed well in basketball.
During his education at Louisville Male High School, in 1952, he was made part of the elite school sponsored literary association - Athenaeum Literary Association. His articles and contributions were published in the club’s yearbook. In 1955, Thompson was expelled from the Athenaeum Literary Association on the charges of being an accessory to the robbery; he was in the car with the perpetrator Due to the same reason, he could not appear in his final examinations and thus did not graduate.
Thompson was given the choice of prison or the military and in 1956, he joined the United States Air Force. After completing basic training at Lackland Air Force Base in Texas, he was transferred to Scott Air Force Base in Illinois to pursue studies in Electronics. In 1956, after his application to become an aviator was rejected, he was sent to Eglin Air Force Base near Florida. There he went to evening classes at the Florida State University. 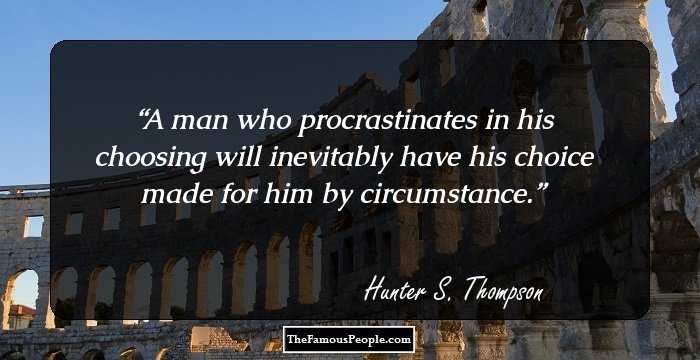 Quotes: Will
Continue Reading Below
Career
While at Eglin, Hunter S Thompson got his first writing job as the sports editor of ‘The Command Courier’. As part of the job, he had to travel throughout USA with the football team Eglin Eagles covering their games. In 1957, he also wrote a sports column for a local newspaper – ‘The Playground News’. He pursued these jobs without using his name as he was still part of the US Air Force.
Hunter S Thompson was honorably discharged from the Air Force in June1958. Shortly afterwards worked as sports editor of a newspaper in Pennsylvania for a short period of time. He later shifted to New York City. During his time in the city he had several short phases of employment, such as auditing courses at the Columbia University of General Studies, as a copy boy at ‘Time’ and reporting for’ The Middle Town Daily Record’. However, he was fired from work for various reasons.
In 1960, Hunter S Thompson relocated to Puerto Rico. There he worked as a freelance journalist for New York Herald Tribune and other local papers. Post his return to the United States in 1961, he got work as a security guard at Big Sur Hot Springs. He was employed there for eight months.
During this time, an article of his was published in the popular magazine ‘Rogue’. The unexpected attention that he got from the article cost him his job. He also wrote many short stories and two novels, namely, ‘Prince Jellyfish’ and ‘The Rum Diary’, but saw little success.
Between 1962 and 1963, Hunter S Thompson worked as a correspondent with ‘The National Observer’ and travelled to South America. While at Brazil, he worked for the ‘Brazil Herald’ for a brief period.
In 1964, he returned to California where he continued his work for Dow Jones owned weekly ‘The National Observer’. In 1965 he terminated ties with the National Observer following disagreement with its editor over the publishing of his reviews in paper. It is then that he moved to San Francisco and here he was exposed to the drug and hippie culture that was becoming popular in the area.
The same year he was hired by the editor of ‘The Nation’ to the write a story on the Hell-Angels motorcycle club. The article was published in May 1965 and post the success of the same he received many book offers. He continued his journey with the riding gang for a year after which his relationship with the club got spoilt.
In 1966, his book ‘Hell's Angels: The Strange and Terrible Saga of the Outlaw Motorcycle Gangs’ was published and it garnered positive reviews. The success of the book gave him the opportunity to publish articles in popular magazines towards the late 1960s.
In 1970 Hunter S Thompson ran for Sheriff of Pitkin County, Colorado and lost by a minor margin. His account of the campaign ‘The Battle of Aspen’ was published on the Rolling Stone. The same year he wrote an article ‘The Kentucky Derby Is Decadent and Depraved’ for the magazine ‘Scanlan’s Monthly’. This work was the first to incorporate the gonzo journalism style of writing; a style incorporated in almost every literary work of Hunter S Thompson.
Continue Reading Below
In 1971, he took up an assignment with Sport Illustrated. However, what began as a writing assignment for a newspaper became content for the best-selling book ‘Fear and Loathing in Las Vegas: A Savage Journey to the Heart of the American Dream’; the book was a narration of the drug fuelled journey across Las Vegas, and it was published in 1972. The book earned considerable acclaim.
Towards the end of 1971, Hunter S Thompson was assigned to report the election campaign of President Richard Nixon. The combined articles were later published as ‘Fear and Loathing on the Campaign Trail '72’.
In 1974, Hunter S Thompson was sent to Zaire, Africa to cover the fight between Muhammad Ali and George Foreman. However, he skipped the boxing match and was found in an intoxicated state in his hotel. This incident began affecting his career. In the following years his relationship with the magazine was further strained and he began contributing less.
In 1980, he relocated to Hawaii and began work on his book ‘The Curse of Lono’. This piece of writing first appeared in the magazine ‘The Running’ in 1981 and the excerpts were published in the ‘Playboy’, in 1983.
Between mid and late 1980s, he began contributing weekly writings as a media critic for the newspaper San Francisco Examiner. By the early 1990s Hunter S Thompson was working on a novel called 'Polo Is My Life' but it was not published. Afterwards he began refusing assignments and became reclusive.
Starting from 2000 until 2005 he wrote weekly columns on sports for ESPN.com’s “Page 2.” This was later published as a collection in 2004 by Simon & Schuster. 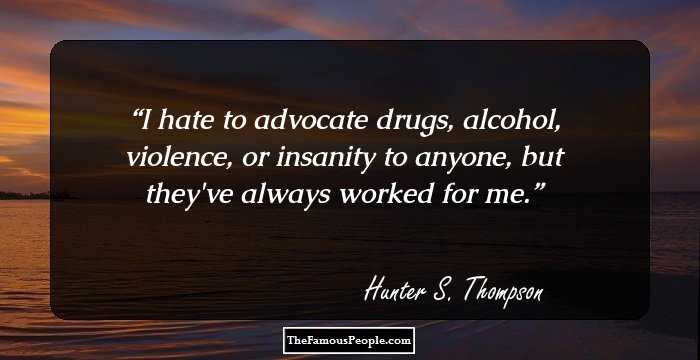 Quotes: Me, I
Major Works
Hunter S Thompson is remembered as the creator of gonzo journalism. His style of writing is considered a revolutionary shift from the then prevalent conventional and objective style to reporting.
Personal Life & Legacy:
Hunter Thompson married longtime girlfriend Sara Dawn Conklin on 19 May 1963. They had a son Juan Fitzgerald Thompson on 23 March 1964. The couple divorced in the year 1980 but remained good friends.
He married Anita Bejmuk in April 2003.
Hunter S Thompson died on 20 February 2005 from a self-inflicted gunshot. 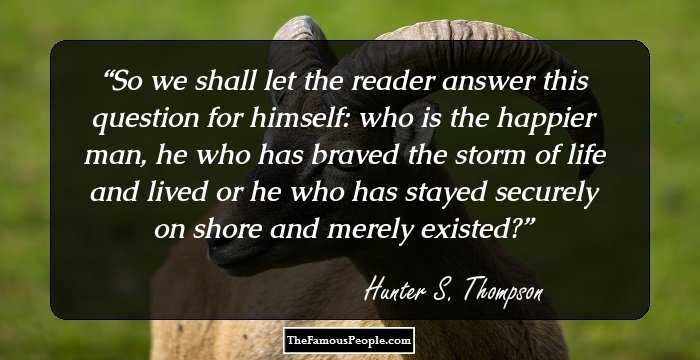 See the events in life of Hunter S. Thompson in Chronological Order