Humphrey Bogart was an American actor best remembered for his performance in iconic films, such as Casablanca, The Maltese Falcon, and The African Queen. He was born in a wealthy family in New York City. Although his parents wanted him to succeed academically, he did not take much interest in studies and was even expelled from school for misconduct. He then joined the United States Navy before taking up odd jobs to support himself. Eventually, he landed the job of a stage manager. Starting from the 1920s, he started doing minor acting jobs at the Broadway; ultimately landing lead roles in the mid-1920s. The stock exchange crash in 1929 forced him to shift to Hollywood where he was initially typecast as someone who played gangster roles in B-grade movies; but persistence and hard work payed off in the end. By the beginning of the 1940s, he was recognized as an established actor and a lead man in Hollywood. Subsequently, he started delivering hits after hits. Many of his later films were recognized as classics. Image Credit
https://commons.wikimedia.org/wiki/File:Humphrey_Bogart_1945.JPG
(WCCO (AM), a CBS affiliate--the network where the program originated. This local affiliate intended to use the photo in its local ads for the Minneapolis-St. Paul area it serves. / Public domain)

Pete Davidson
Actors #79
Film & Theater Personalities #185
DID WE MISS SOMEONE?
CLICK HERE AND TELL US
WE'LL MAKE SURE
THEY'RE HERE A.S.A.P
Quick Facts

Humphrey DeForest Bogart was born on December 25, 1899 in New York City, New York. His father, Dr. Belmont DeForest Bogart, was a well-known heart surgeon while his mother, Maud Humphrey, was a famous painter. Young Humphrey acted as his mother’s model a number of times.

Humphrey was the eldest of his parents’ three children. He had two sisters; Frances and Catherine Elizabeth. His parents were rather formal and showed very little emotion to them.

Humphrey Bogart began his education at Delancey School and studied there until fifth grade. After that, he was shifted first to the prestigious Trinity School and then in 1917 to the equally elite Phillips Academy. His parents expected him to join University of Yale after school.

Unfortunately, in 1918, he was expelled from school purportedly for throwing a groundskeeper into Rabbit Pond in the campus. With no other option left, he joined the United States Navy. His time in the US Navy helped him develop a separate set of values independent of family influence.

In 1919, once the World War I ended, Humphrey Bogart was honorably discharged from the Navy. He came home to find his father sick and family fortune diminished due to bad investment. Therefore, he began to look for work. 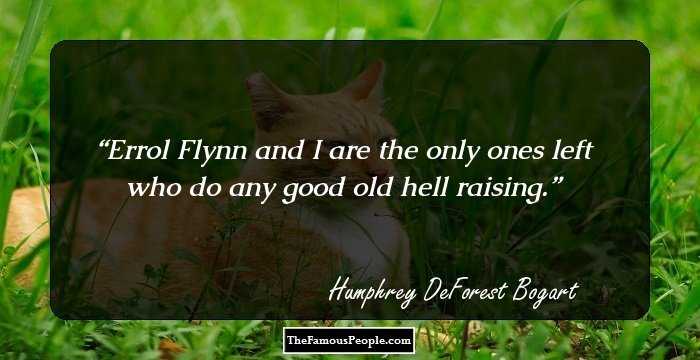 He got an office job at World Film Corporation, a company owned by theatre actor and producer William Aloysius Brad Sr. There he had to do all types of job and even tried his hand at script writing and directing, but failed.

In the end, it was William’s daughter Alice, who introduced Bogart to acting. He initially acted as her stage manager. Then in 1921, he made his stage debut in her production, Drifting, playing a Japanese butler and uttering nervously his one-line dialogue, "Drinks for my lady and for her most honored guests."

More roles followed and Bogart persistently worked on his chosen field. From 1922, he began appearing in a number of Broadway productions with drawing room or country house settings. Initially, he got small roles or second leads in comedies, such as Meet the Wife (1923), where he played the part of reporter Gregory Brown.

In 1925, he got his first lead role in a comedy called Cradle Snatcher. His success at the Broadway was soon noticed by film directors. In 1928, he made his film debut with a short film called The Dancing Town; but concentrated mainly on stage.

Then the stock market crashed in 1929; it had a huge negative impact on stage production and there was hardly any work. Therefore, like many other stage artists, Humphrey Bogart set out for Hollywood. Along with Spencer Tracy, he co-starred in Up the River, a 1930 feature film directed by John Ford.

Bogart continued to act in a number of films, but could not make any impact. Therefore, he decided to go back to Broadway and began shuttling between New York and Hollywood.

In 1934, he got the lead role in the Broadway play Invitation to Murder. It caught the attention of theatre producer Arthur Hopkins, who cast him in the role of the ruthless killer Duke Mantee in the 1935 play The Petrified Forest.

His performance in the play The Petrified Forest caught the attention of Hollywood directors. When Warner Brothers decided to make a film on the same novel in 1936, he was cast in the same role. The film, which earned $500,000 at the box office, made him famous.

In spite of the success, Warner Brothers offered him a 26-week contract at $550 per week. Bogart had no other option but to accept that. But unfortunately, these films typecast him as a gangster.

From 1936 to 1940, Bogart made one movie every two months on an average and that too under grueling condition. Although Bogart did not like these roles, he did not have any alternative. Refusing to abide by the studio dictate would mean suspension without pay.

In 1941, he was selected to play the role of Roy Earle in High Sierra. Although it was a crime thriller, his character had certain depth. Bogart was able to portray that successfully. The part earned him critical acclaim. It was technically the last important negative character that he played.

Also in 1941, Bogart starred in Maltese Falcon, a classic noir film directed by John Huston, and played the role of detective Sam Spade. The film, along with High Sierra, effectively launched Bogart as a leading man.

However, Bogart had to wait for three more movies to get a romantic lead role. In 1942, he was cast as Rick Blaine, a hard-pressed expatriate nightclub owner in Michael Curtiz’s Casablanca. The role not only earned him his first Oscar nomination, but also the first place in the studio roster.

Humphrey Bogart continued playing lead roles in films like Action in North Atlantic, Sahara (1943), and Passage to Marseilles (1944).  He also made a cameo appearance in the World War II fundraiser, Thank You Lucky Star (1943).

Next in 1944, he made To Have and Have Not. It was a romance-war-adventure film based on a novel by Ernest Hemmingway and co-starred Lauren Bacall. The film was highly successful at the box office.

Although there was a huge age difference, Bogart and Bacall developed a close rapport that lasted till his death. In 1945, they repeated their on-screen magic in The Big Sleep, earning $3 million at the box office. Dark Passage (1947) and Key Largo (1948) were two other hit movies where they acted together.

The Treasure of the Sierra Madre was another significant movie released in 1948. Directed by John Huston, it was the first Hollywood movie to be shot outside the United States. Although he did not win any award for the movie, it is now regarded as one of the greatest screen classics.

Bogart continued making movies until 1956. His hard-hitting performance in his last film The Harder They Fall (1956) earned him great critical acclaim. In fact, his impact as an actor was such that it helped small-time movies like Beat the Devil (1953) and The Barefoot Contessa (1954) achieve high popularity. 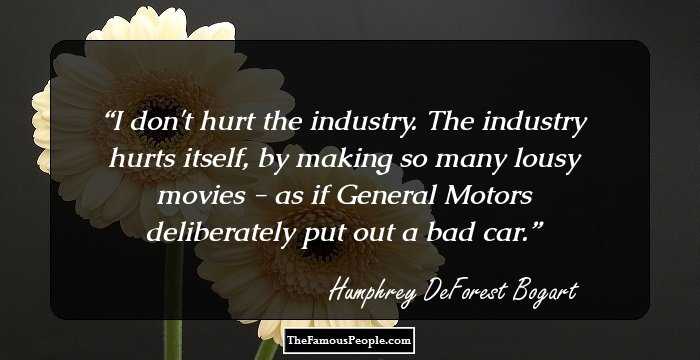 In 1951, he won the Academy Award for Best Actor for his role as Charlie Allnut in the movie The African Queen.

In 1999, the American Film Institute named Bogart the top male film star of the 20th century. He had attained the status of a legend in his lifetime only. 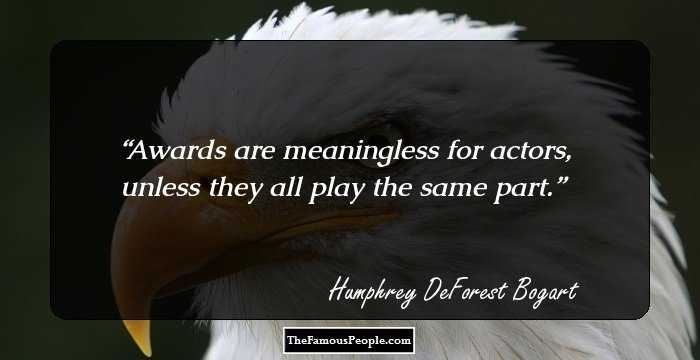 Humphrey Bogart married actress Helen Menken on May 20, 1926 after four years of courtship. However, the marriage did not last long and they divorced on November 18, 1927.

On April 3, 1928, Bogart married actress Mary Philips. Subsequently, Bogart moved to Hollywood; but Philips, who had an established career at New York, refused to accompany him. Finally, they got divorced in 1938, but remained on good terms.

Bogart married actress Mayo Methot on August 21, 1938. She suspected Bogart of infidelity and the two fought to such an extent that friends called them The Battling Bogarts. Ultimately, they divorced in 1945.

On May 21, 1945, Humphrey Bogart tied the knot for the fourth and final time with actress Lauren Bacall. In spite of the difference in age, the marriage lasted till Bogart’s death in 1957.  The couple had two children: Stephen Humphrey Bogart and Leslie Bogart.

Towards the end of his life, Bogart developed cancer of esophagus. Since he never consulted doctor, his condition could not be determined till January 1956. By this time, it was too late for surgery or chemo therapy. He died of the disease on January 14, 1957.

On February 8, 1960, Bogart was given a star on the Hollywood Walk of Fame at 6322 Hollywood Boulevard.

In 1997, the United States Postal Service honored Bogart with a stamp bearing his image in its Legends of Hollywood series.

Quotes By Humphrey Bogart | Quote Of The Day | Top 100 Quotes

See the events in life of Humphrey Bogart in Chronological Order