(Songwriter, Actor & Lead Singer for the Band 'Huey Lewis and the News')

Huey Lewis, born as Hugh Anthony Cregg, is an American musician, singer, lyricist and actor. He is the lead singer for the band ‘Huey Lewis and the News’ and plays harmonica for it as well. He was born in New York City and brought up in California. He started singing and playing harmonica at a young age. He was one of the band members of ‘Clover’, a band that became more famous in the UK but got disbanded after the failure of its first two albums. After that, Lewis joined the band ‘Huey Lewis and the American Express’ which later on changed its name to ‘Huey Lewis and the News’. The band released many hit albums like ‘Sports’, ‘Picture This’, etc. Apart from singing, Lewis has done cameo in many movies and starred opposite Gwyneth Paltrow in ‘Crusin’. He also sang a hit duet for the movie with Paltrow. He was married for six years to Sidney Conroy and has two children with her. Recently, he appeared on the ABC television series ‘Dancing with the Stars’. American People
Rock Singers
Lyricists & Songwriters
American Men
New Yorkers Actors
Childhood & Early Life
Huey Lewis was born in New York City to Hugh Anthony Cregg, Jr. and Magda Lewis. His father was a doctor of Irish American heritage and mother was a polish immigrant. His parents got divorced when he was only 13.
Lewis was brought up in Marin County, California. He went to the Strawberry Point Elementary School and then did his junior high from Edna Maguire, Mill Valley. He graduated from New Jersey’s Lawrenceville School.
He was really good in studies and was accepted by the Cornell University, New York. He did not take the offer immediately and went on a tour across USA and learned to play harmonica. He toured across Europe as well.
Lewis took up an admission in the engineering program in Cornell University upon his return. He made musician friends there like Lance and Larry. His interest in studies was lost and he joined a band called ‘Slippery Elm’. 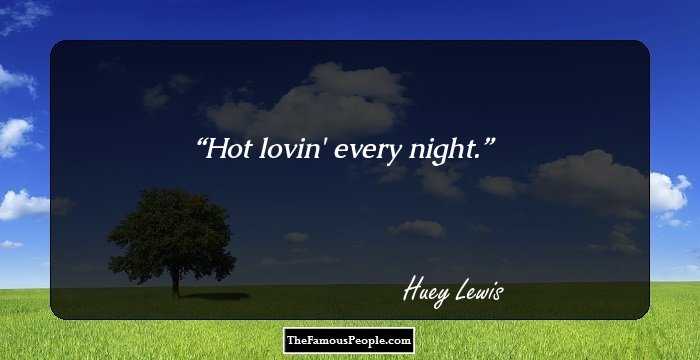 New Yorkers Musicians
Cornell University
Cancer Actors
Male Singers
Career
In 1971, Lewis became the member of a band called ‘Clover’. Other members of the band were Alex Call, John McFree, John Ciambotti, Mitch Howie, Sean Hopper, Marcus David and Mickey Shine. He used to sing and play harmonica for the band.
In 1976, ‘Clover’ decided to get out of the Bay Area and take their talent to Los Angeles. The band started playing at noticeable clubs there and they were offered by Nick Lowe to go on a tour with him to the UK.
Around this time, ‘Clover’s’ music started getting popularity in the UK and their genre started getting famous by the name of ‘pub rock’. Two of their albums were produced by Robert John ‘Mutt’ Lange, but they were not very successful.
In 1978, the ‘Clover’ returned back from the UK to California and it disbanded. Lewis played music as ‘Huey Harp’ in Thin Lizzy’s successful album ‘Live and Dangerous’. He played at a club in California and bagged a contract with Phonogram Records.
In 1979, Lewis formed a band called ‘Huey Lewis and the American Express’. The band played a few gigs and then changed its name to ‘Huey Lewis and the News’.
The band released its self-titled debut album in 1980, which failed badly.
The band’s second album ‘Picture This’ was released in 1982 and it was a great success. The album was certified gold and its single ‘Do You Believe in Love’ became a great hit.
In 1983, band’s third album ‘Sports’ was released and it soon became one of the best selling pop albums, selling around 10 million copies of the album.
In 1986, the band came out with its next album ‘Fore!’ and it too was a big hit.
Continue Reading Below
Around the same time, Lewis produced Nick Lowe’s ‘I Knew the Bride (When She Used to Rock and Roll)’ and did music for Bruce Hornsby & The Range’s ‘The Way It Is’. Hornsby returned Lewis favor by writing a song for his next album.
During early 90s, Lewis and his band performed for ‘USA for Africa’ fundraise by singing the song ‘We Are the World’. Two of their new albums were released during this time, namely, ‘Small Wonder’ and ‘Hard at Play’.
In 1994, the band released the album ‘Four Chords & Several Years Ago’. It was one of the most critically acclaimed albums of their music career. Their new recording label Elektra’s lack of promotion led to band’s commercial downfall.
During the late 90s, the band recorded a hit single for the movie ‘The Power of Love’. Lewis started making appearances in the movies like ‘Short Cuts’ in which he had a substantial role and ‘Sphere’ in which he only did a cameo.
In 2000, Lewis appeared in another motion picture called ‘Duets’ in which he had a big and chunky role. He starred with Gwyneth Paltrow in the movie and sang a hit single for the movie, ‘Cruisin’, with Paltrow which became a huge hit.
In 2007, Lewis did an interview for the podcast series called ‘Stuck in the 80s’ in which he declared that the band was in the process of writing songs for their upcoming album. He was also named the Sacromento’s ‘Musician of the Year’.
In 2008, ‘Huey Lewis and the News’ did an opening act for ‘A Capitol Fourth’ in Washington. It was attended by half a million people and was also broadcasted on PBS.
In 2011, Lewis played in the Summer Camp Music Festival, Illinois along with the Chicago based jam band ‘Umphrey's McGee’.
In 2013, he appeared on the television series 'Dancing with the Stars', where he performed 'The Heart of Rock and Roll' in celebration of the 30th anniversary release of the band's third album 'Sports', which was released in 1983
Recommended Lists:

Cancer Singers
Male Musicians
American Actors
Cancer Musicians
Personal Life & Legacy
In 1983, Lewis got married to Sidney Conroy in Hawaii and they have two children. The couple got separated after six years years but they are still cordial together.
Recommended Lists:

American Singers
Actors Who Are In Their 70s
American Musicians
Cancer Rock Singers
Trivia
When Lewis was young he did many types of jobs like landscaping, carpentry, wedding planner, etc.
He is now debuting in the Broadway musical Chicago, playing the role of Billy Flynn.
Recommended Lists:

See the events in life of Huey Lewis in Chronological Order