Eddie Vedder is a popular American musician, best known to the world as the leading vocalist and guitarists of the alternative rock band, ‘Pearl Jam’. He has been ranked #7 on the Rolling Stone magazine’s list of ‘Best Lead Singers of All Time’. Blessed with distinctive sound and powerful vocals, Vedder changed the way the world perceived alternative rock by adding new dimensions to the music style. He transfigured the way lyrics were written, invoking the use of storytelling and basing them on personal, social and political themes. Vedder had a tumultuous early life but instead of bowing down to it, he channelized his energy towards music. He has served as a band member for ‘Temple of the Dog’ and ‘Pearl Jam’ which hit the music industry big time in the 90s with their chartbusting albums. However, Vedder’s contribution to music is not limited to these bands alone. Over the years, he has come up with two solo albums, ‘Into the Wild’ and ‘Ukulele Songs’. Furthermore, he is actively involved in soundtrack work and contributes to albums by other artists American People
Rock Singers
Lyricists & Songwriters
American Men
Illinois Musicians
Childhood & Early Life
Eddie Vedder was born as Edward Louis Severson III on December 23, 1964 in Evanston, Illinois to Karan Lee Vedder and Edward Louis Severson Jr.
When Vedder was just one year old his parents separated and his mother remarried Peter Mueller. During his childhood days Vedder believed Mueller to be his biological father and was known by the name of Edward Mueller.
In the Mid-70s, the family moved to San Diego, California. Since his family was large and extensive with seven siblings, young Vedder turned to music to comfort himself. During this time, he attended the San Dieguito High School.
When Vedder was in his teens, his mother and Mueller divorced. Not wanting to change high school, he chose to live with his stepfather, while his mother moved to Chicago. He took up night job at a drug store. During this time, he realized his true parentage.
Since managing work and studies was getting increasingly difficult, he dropped out of high school, joining his family in Chicago. Meanwhile, he changed his name to Eddie Vedder. In the early 1980s, while working as a waiter, he earned his high school GED. 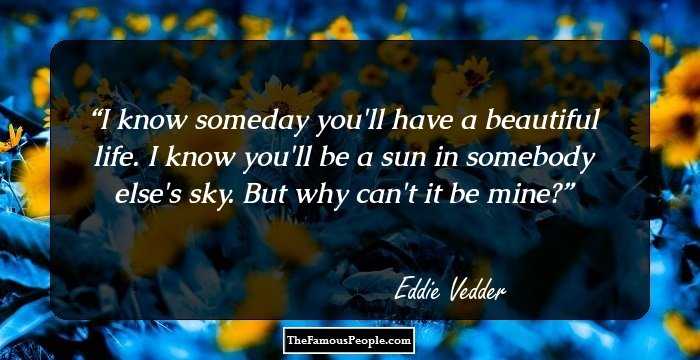 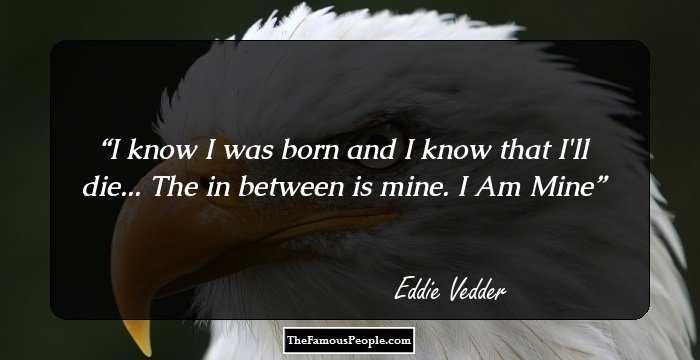 Quotes: I
Major Works
His contribution as a vocalist and one of the lead guitarists of the alternative rock band, ‘Pearl Jam’ has been top-notch. The first three albums of the band gained a multi-platinum status and garnered several Grammy nominations.
Awards & Achievements
Eddie Vedder is ranked #7 on the ‘Best Lead Singers of All Time’ list by Rolling Stone. 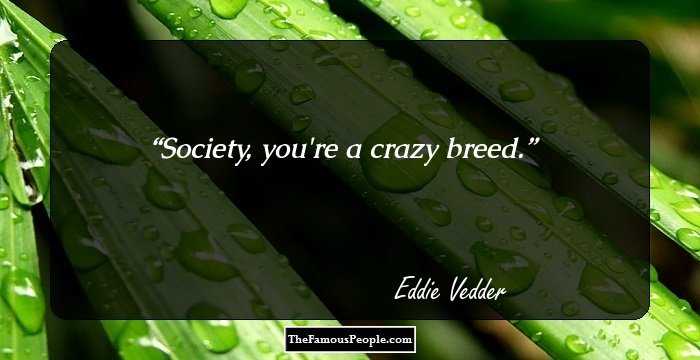 Personal Life & Legacy
In 1994, he married his long-time girlfriend Beth Liebling. The marriage, however, hit the rocks and the couple divorced in 2000.
In 2010, he married Jill McCormick. The couple has two daughters, Olivia and Harper.
Apart from his musical career, Vedder is passionate about surfing. Furthermore, he is a die-hard fan of American professional baseball franchise Chicago Cubs, Chicago Bulls and Chicago Bears.

Quotes By Eddie Vedder | Quote Of The Day | Top 100 Quotes

See the events in life of Eddie Vedder in Chronological Order