Horace Greeley was an American reformer and editor best remembered for launching the ‘New York Tribune.’ He is known as one of the most influential figures in publishing in the 1800s. With the help of his newspaper, he set out to educate and influence Americans on numerous social and economic issues like slavery, prostitution, capital punishment, alcoholism, and more. He was associated with the conservative Whig Party; however, on major issues like labor’s and women’s rights, he differed from his conservative colleagues. He was a trendsetter. Under his editorship, Margaret Fuller, who was a feminist, became the first female columnist in New York. In 1851, he wrote an editorial in which he wrote “Go west, young man.” This quote inspired many to set out and conquer the frontier. He was also the founder of the first temperance club in Vermont. He was a leading proponent of “associationism,” a movement that aspired to establish a new social and economic order based on Charles Fourier’s teachings. He was initially hesitant to join the anti-slavery movement, but once he did, he made every effort to convince the public about the evils of slavery. American People
American Men
Male Journalists
American Journalists
Male Media Personalities
Childhood & Early Life
Horace Greeley was born on February 3, 1811, in Amherst, New Hampshire, USA, to Zaccheus and Mary. His father was a day laborer and farmer. The family was not economically well off and this affected Greeley’s schooling. He had to leave school at the age of fourteen. 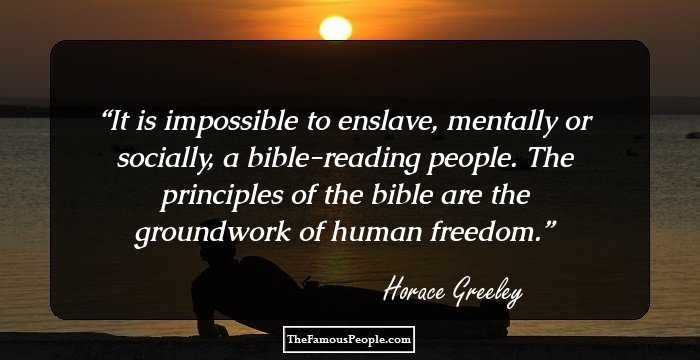 The Sexiest Men Of 2020, Ranked
Career
Horace Greeley’s first job was that of an apprentice with a newspaper in Vermont. Here he learned journalistic skills, which helped him later in his career. His next job was that of a printer in Pennsylvania and New York. In 1831, he moved to New York and initially worked with small publications.
His career took an upward turn when in 1834 he founded the ‘New Yorker,’ which was a news plus literary magazine. He was both an editor and writer for the magazine. The magazine failed to make any profit. At this point of time the main source of his income was writing.
Though the magazine did not make much profit, it did establish him as an editor to be reckoned with. The magazine also brought Horace Greeley to the attention of Thurlow Weed, who was a prominent New York political figure and a liberal Whig. Their political association lasted for almost twenty years.
During the elections of 1838 and 1840, Greeley edited the ‘Log Cabin’ for the Whigs. It was a weekly campaign paper, and under the editorship of Greeley, its circulation reached 80,000 copies.
Greeley not only championed the Whig’s causes through his newspaper, but he also campaigned for them. He was a member of various Whig committees and effectively managed state campaigns.
In 1841, he founded the ‘New York Tribune.’ He remained the editor of the newspaper till his death. The paper focused on reforms, social issues, and economic development.
Through this newspaper, he championed the causes of education reforms, western expansion, and producers’ cooperatives. However, it needs to be noted here that he was against women’s suffrage. The newspaper was an important vehicle in popularizing Fourier’s communitarian beliefs.
The publication ‘Tribune’ was merged with ‘New Yorker’ and ‘Log Cabin.’ During the 1840s and 1850s, the popularity of ‘Tribune’ grew tremendously. The newspaper played a prominent role in the growing anti-slavery sentiment in the north.
His association with the Whig members had come under severe strain after they continuously failed to support him for high office. Therefore, in 1854, he aligned himself with the newly formed Republican Party. In fact, he played a prominent role in organizing the Republican Party.
Continue Reading Below
Horace Greeley’s failure to support the re-nomination of Lincoln made him unpopular with the Republicans. He advocated amnesty for former Confederates. In 1867, he signed the bail bond of Jefferson Davis, who was the former president of the Confederate. Both these acts made him a highly unpopular figure in the Radical Republican Party.
During the reconstruction period, Horace Greeley advocated for equal rights for African Americans. However, he was not happy with President Johnson’s efforts.
After President Johnson vetoed the Civil Rights Bill and Freedman’s Bureau Bill, he decided to part ways with President Johnson. He supported President Johnson’s impeachment and campaigned for Ulysses S. Grant in the 1868 election.
Greeley was highly critical of the corruption in the Grant administration. The reluctance of the Grant administration to take up civil service reforms and the administration’s support for reconstruction measures in the south, finally convinced Greeley to leave the Radical Republican Party and join the Liberal Republicans.
In 1872, Horace Greeley was the presidential candidate of the Liberal Republican Party. He was attacked mercilessly by the opposition.
After the Civil War, Greeley saw his influence diminishing in ‘Tribune.’ After losing the presidential election in 1872, he also lost the editorship of ‘Tribune.’ The defeat in the election, losing the editorship of ‘Tribune,’ and his wife’s death were too much for Greeley. He suffered a mental breakdown and died in late 1872. 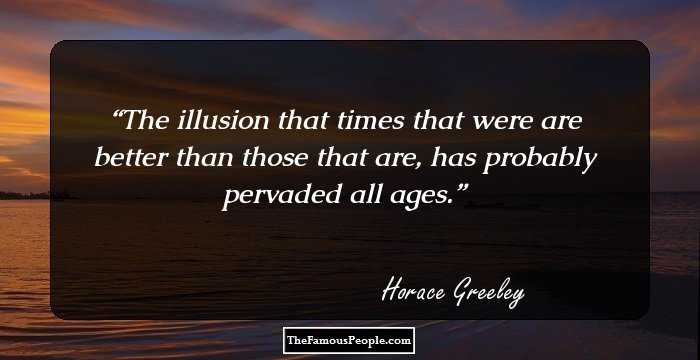 Major Works
Horace Greeley is most prominently known for launching the ‘New York Tribune.’ The newspaper came to be known for its high standards of news gathering, exceptionally qualified staff, and articles which delved into the social, intellectual, and moral issues of the day.
The ‘New York Tribune’ helped create awareness on issues like alcoholism, gambling, capital punishment, and prostitution.
His anti-slavery stance helped influence a vast majority of Americans against this social evil. Through his writings, speeches, and newspaper, he played a prominent role in deciding the national debate on this issue.
Organizing the Radical Republican Party is also considered one of his major achievements.
Family & Personal Life
In 1836, Horace Greeley married Mary Young Cheney. They had nine children but only two survived through adulthood.
During the 1872 presidential election, he was so viciously attacked by the Radical Republican Party that it cost him his sanity. His wife’s death just a week before the election also had a negative effect on his physical and mental health. He was admitted to a mental hospital, where he died on November 29, 1872. 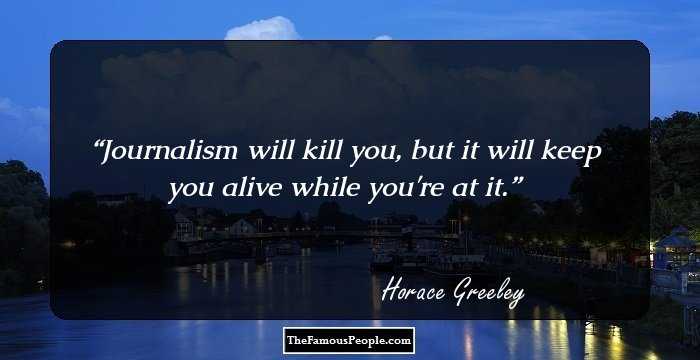 Quotes: You, Will
Trivia
Horace Greeley is often credited for coining the phrase, “Go West, young man.’ However, John B.L. Soule is the original writer of the phrase!
You May Like

Quotes By Horace Greeley | Quote Of The Day | Top 100 Quotes

See the events in life of Horace Greeley in Chronological Order